What is Bixby? We take a closer look at Samsung’s new virtual assistant and Siri rival, Bixby, which is now available in the UK on the Galaxy S8 and newly launched Galaxy Note 8.

After months of rumours and leaks, the Galaxy S8 and Galaxy Note 8 – along with the Galaxy S8+ – are all out in the wild, complete with high-end designs that  bring genuine innovation to smartphone aesthetics, the latest hardware, and those all-important curvy edges on the screen.

But there’s one new feature that has us particularly intrigued. There’s been a lot of talk about Samsung’s AI ambitions since it snapped up Viv in 2016 – an AI platform developed by the team behind Siri.

Just what the company had planned remained unclear at first, but as the Galaxy S8 launch neared, reports of a new virtual assistant to rival the likes of Siri, and Google’s recently launched Google Assistant, began to crop up.

Now, all has been revealed, with Samsung first confirming the presence of its new assistant, Bixby, on the Galaxy S8. However, until now many of us hadn’t had a real taste of Bixby, as its initial release was restricted to South Korea and, shortly after, the US. That’s all changed now, though, with Bixby available in the UK, Australia, South Africa, and many more countries – and we’ve a shiny new Samsung phablet in the Galaxy Note 8 to appreciate it on.

So, just what is Bixby all about? Is it just another Siri clone, or has Samsung managed to transfer its smartphone design innovation to the AI aspect of its new handset?

Allow us to explain… 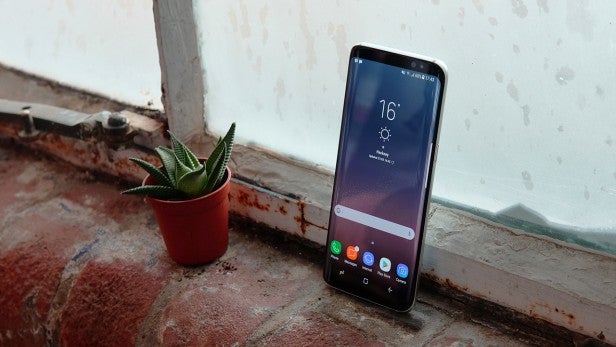 As mentioned, Bixby is Samsung’s take on the personal virtual assistant. Think Siri, Cortana, and Google Assistant, but with a few extras thrown in. Here’s Samsung on the new feature:

“Samsung has a conceptually new philosophy to target this problem: instead of humans learning how a machine interacts with the world (a reflection of the designers’ abilities), it is the machine that needs to learn and adapt to us. The interface must be natural and intuitive enough to flatten the learning curve regardless of the number of functions being added. With this new approach, Samsung has employed artificial intelligence, reinforcing deep learning concepts to the core of our user interface designs. Bixby is the ongoing result of this effort.”

Mobile Editor Max Parker has had some brief hands-on time with the Galaxy S8, and got a feel for how the assistant works on the handset, but we’re yet to test out Samsung’s latest software feature in full.

That said, there are a few things we know about it. Here are the main features:

How does Bixby work?

First, the leftmost homescreen is Bixby’s main hub, where it will display news, your steps, your heart rate, suggested YouTube videos and more. The assistant will also pop up throughout the S8’s software, offering helpful actions and suggestions.

Apps that have been enabled to work with Bixby will be able to make use of the assistant, which Samsung says will become capable of supporting almost every task that application includes. The company also promises its new assistant is a comprehensive tool in this regard, able to carry out many more tasks within specific apps than rival assistants.

Naturally, users will be able to summon and speak to Bixby on command, and like Siri, you can ask it questions and it’ll carry out basic tasks. When using what Samsung is calling a “Bixby-enabled application”, you’ll be able to bring up the assistant at any time. The company says it will then understand the current context and state of the app you’re using. 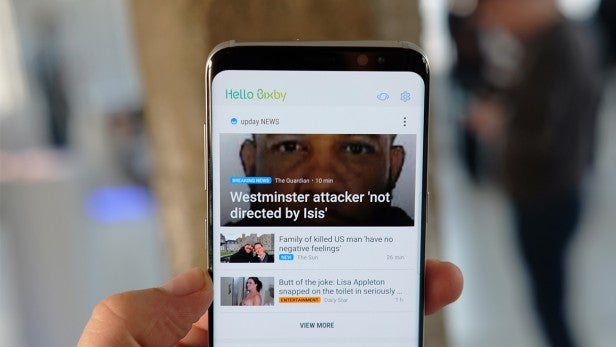 Which apps are actually Bixby-enabled? Well, at launch “a subset of pre-installed applications” are said to be able to play nice with the new assistant. Beyond that, we’re not entirely sure how Bixby will be integrated into other apps, especially those from third-party developers.

Samsung also says “Bixby will allow users to weave various modes of interactions including touch or voice at any context of the application, whichever they feel is most comfortable and intuitive”. Just what this “weaving” entails remains a bit of a mystery, but it sounds as though you’ll be able to interact with the assistant in whichever way you like, whether that’s by voice or touch input, without having to worry about Bixby getting confused if you switch between these methods halfway through.

And if you’re worried about having to say some awkward activation phrase, you’ll be pleased to hear there’s a dedicated Bixby button on the side of the Galaxy S8 and S8+. Pressing this will bring up the assistant so you can take advantage of the AI functionality without announcing it to the world. As Samsung explains: “Turning on and unlocking the phone, looking for the phone application, clicking on the contact bar to search for the person that you’re trying to call and pressing the phone icon to start dialling – you will be able to do all these steps with one push of the Bixby button and a simple command.” 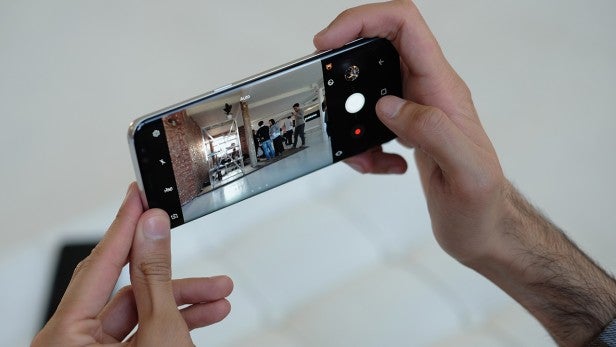 Perhaps one of the most interesting features is the new ability to use Bixby with the Galaxy S8’s camera. Samsung has provided a feature whereby you can use the camera to scan an item, then search online for the best price available. We’re yet to test this out, but it sounds like a genuinely innovative addition, even if it is just another excuse to spend money.

Samsung says Bixby won’t get confused if you don’t say the exact phrase required to activate a particular action. The assistant is said to be smart enough to understand incomplete information, and will apparently start a task even if it didn’t understand the whole of the command – carrying out the parts it did understand and waiting for you to fill in the gaps later with more commands.

Sammy also promises “new voice interfaces” to make the whole thing as intuitive as possible, so it shouldn’t take long to get used to Bixby’s features.

Bixby in the future

Samsung says Bixby is just the first part of its plan for AI on smartphones. In the future, the company will be adding more Bixby-enabled apps, before releasing a tool (in SDK) which third-party developers will be able to use to make their applications and services Bixby-enabled.

And it won’t just be smartphones that benefit from the evolution of Bixby. Samsung has plans to add its new assistant to all its appliances, allowing you to “control your air conditioner or TV through Bixby”. It says it will do this by using Cloud technology, so that as long as a device has an internet connection and” simple circuitry to receive voice inputs”, it will be able to connect with Bixby. It’s all designed to bring the assistant to every aspect of your life, which is precisely what Amazon is trying to do with its Alexa assistant and Echo device, and what numerous others, such as Google and Apple are working towards

Unfortunately, Samsung’s being a tad cagey on when certain Bixby features will be available in specific regions. The latest information we have is that Bixby will be available on all Samsung S8 smartphones at launch, but its Voice function will only be available in Korean and US English from May. More languages will be supported over time, according to the company. Whether UK users will be able to take advantage of all Bixby’s features from May, by using the US English version, remains unclear at this point, but we should hear more in the near future.

Excited to try out Bixby? Let us know in the comments below.