What is a motherboard? We take a closer look at motherboards and break down just what they do in our in-depth explainer.

Put simply, a computer’s motherboard connects all its other parts together. Everything that makes a computer work, from its CPU to its RAM to its hard disk, plugs into the motherboard. A motherboard turns a pile of components into a computer.

But there’s more to it than that, of course. Luckily, we’ve gone and explained all in the following article, so read on for a full breakdown.

Related: What is a CPU?

Laptop motherboards are custom made and usually designed specifically for the laptop, while desktop PC motherboards follow certain design standards. This means you can always tell at a glance where to plug in a CPU, the RAM or your hard disk, for example.

However, that doesn’t mean any component will work with any motherboard. While most hard disks and graphics cards will work with most motherboard models, CPUs are all over the place; they have to both fit physically in the motherboard’s CPU socket and be compatible with its ‘chipset’. If you’re replacing a motherboard, double-check that it will work with your particular CPU.

What’s on a motherboard? 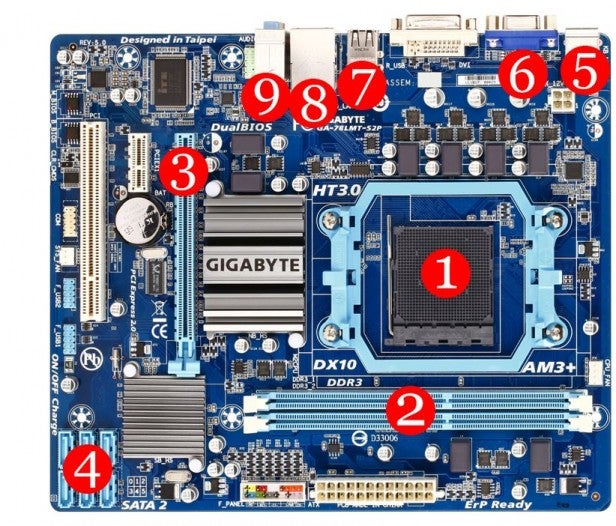 1. CPU (processor) socket
This is where the CPU, or processor, plugs in. Modern computers all have large cooling devices on top of the CPU, normally consisting of a block of metal with fins and a fan. The socket is carefully designed so the processor will only fit in the right way around.

2. RAM (memory) slots
Most desktop PCs have either two or four slots for RAM. More slots mean you can fit more RAM, up to the maximum specified in the motherboard’s manual. In laptops, RAM slots are often the only part of the motherboard the user can replace.

RAM modules are long and thin. The slots have a ridge part of the way along that corresponds to a notch on the RAM module, so the module will only fit the right way around. This ridge also makes sure you can’t fit incompatible RAM in a board, such as an old DDR2 module in a modern DDR4 motherboard.

3. Expansion slots
These are for adding extra components to your PC, such as graphics or sound cards. There are two main types of expansion slots: PCI Express and the now-obsolete PCI. PCI Express slots come in three sizes and speed ratings: x1, x4, and x16, to suit different types of card.

In many PCs these slots may never be used. All motherboards have built-in sound, and many CPUs have integrated graphics components. However, PCs built for playing games often have powerful dedicated graphics cards fitted to a PCI Express x16 slot, and some audiophiles like to fit dedicated sound cards for improved audio quality. 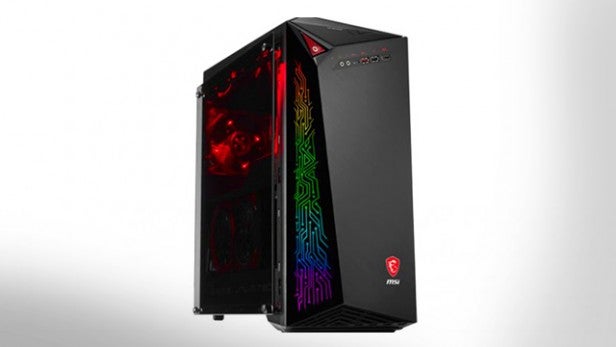 There are two types of connector: SATA2 and the faster SATA3. SATA2 is fast enough for traditional mechanical hard disks and optical drives, while SSDs need SATA3 to run at full speed. SATA2 devices will work fine with SATA3 connectors, but SATA3 devices plugged into SATA2 connectors may run at reduced speeds.

Most keyboards and mice now connect over USB, but there are still some models that use the older round PS/2 connector, which can still be found even on new motherboards.

If your CPU has built-in graphics, you’ll use these connectors to plug into your monitor. If you have a dedicated graphics card (see ‘Expansion slots’ above) you’ll use the connectors on the back of that instead.

Different motherboards have different connectors, such as DisplayPort, HDMI, DVI, and sometimes the older VGA. You’ll need a port that matches the one on your monitor, but bear in mind a DVI port can be used with an HDMI monitor and vice versa by using cheap adaptors (but it won’t transmit any sound).

Almost anything you plug into your computer on the outside, from keyboards to mice to printers, plugs into a USB port. There are two types of full-size USB that you’ll be familiar with: USB2 and USB3. USB3 is far faster, and better suited to devices such as USB3 external hard disks, where the extra speed will really make a difference. Most motherboards have both USB2 and USB3 connectors, and all USB2 and USB3 devices will work when plugged into either port; they may just work a little slower over USB2.

Modern motherboards now also come with USB-C, which you can read more about in our USB-C guide.

Not all laptops have wired network ports, but they’re still found on practically all desktop PCs. This is where you plug in an Ethernet (network) cable to create a wired, as opposed to wireless, network connection to a home internet router or the office network. All modern motherboards have Gigabit Ethernet ports, also called 10/100/1000, which means they can transfer data at 1,000 megabits per second (Mbit/s), or a theoretical maximum of 125 megabytes per second (MB/s).

And that’s your guide to motherboards. You’ll be building your own PC in no time…

Let us know your thoughts on motherboards in the comments.