What are Air Masts? As EE reveals the UK’s first drones and balloons capable of carrying high-speed 4G mobile connectivity to the country’s ‘black spots,’ we explain what the new technology is, how it works, and why you should care.

What are Air Masts?

Developed by EE and a handful of its partners, , according to EE’s representatives.

These UAVs will be equiped with a patent-pending EE technology that utilises small cells to connect back to the main EE network and offer 4G coverage to UK ‘black spots’.

EE also anticipates that its Air Masts will be able to be deployed in emergency scenarios, such as in search and rescue operations, and is backing the UAVs with a new fleet of rapid response vehicles designed to support the company’s emergency services network during outages and maintenance periods.

The company says that it expects to deliver its first balloon solution in a rural environment later on in 2017, adding that it is working with Ofcom to overcome the regulatory challenges needed to send the solution (quite literally) airborne.

Air Masts have been in the works for a couple of years now, with the initiative first outlined in 2015 as part of the company’s ‘Signalling the Future’ investment programme.

The photo below shows an Air Mast drone – developed in partnership with uVue – in action at a press event at London’s Oval cricket ground.

As far as we’re aware, it was the first live demonstration of the technology, though the British weather was of course in typically fickle form. 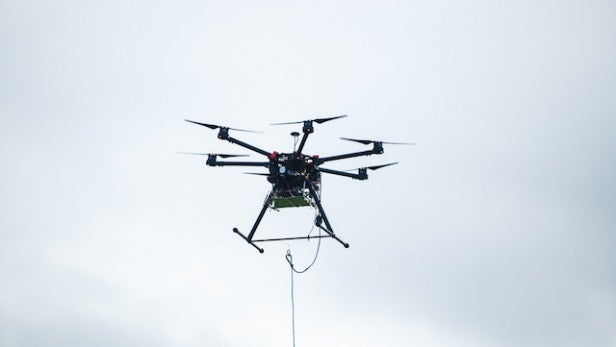 What will Air Masts mean for you?

Maybe a lot – or potentially nothing at all.

If you live in a major UK city or town, chances are you already enjoy good access to 4G networks, barring the odd blip.

However, it’s widely acknowledged that there are still a great many coverage ‘black spots’ dotted around the UK, particularly in rural areas.

If you live somewhere where 4G (or even 3G) coverage is patchy, Air Masts have the potential to improve your access to high-speed mobile data and VoLTE calling.

“When we look at our network, rural areas are where most of the work and focus is now needed. But it’s also where it’s the hardest. Connecting rural Britain is one of the hardest things we have to do,” said EE CEO Marc Allera announcing the new technology.

Do the unveiling of Air Masts mean you should snap up an EE contract at the next available opportunity?

Well, EE already offers the most comprehensive 4G network in the UK and is aiming for 98% total UK coverage by 2020.

The introduction of Air Masts clearly form part of this master plan, but while real world testing of Air Mast balloons should begin later in the year, wider deployment may not happen until 2018 or even 2019.

That means that if you’re currently residing in a ‘black spot’, Air Masts aren’t going to magically give you 4G overnight.

In other words, it’s probably prudent to stick whatever mobile solution currently works for you – for now.

That said, EE is the only network promising to fly 4G to remote areas any time soon, so it’s certainly the one to watch, as should Air Masts (and they likely will) see large-scale deployment, they’re a potential game-changer for those affected by poor mobile coverage.

Is your area covered by ample 4G? Let us know in the comments below.