Electric cars are on the roads, and driverless cars are just a few years away. So what’s the next big transport idea we’ll be nicking from the annals of science fiction? Flying cars.

The world’s first fully electric VTOL (vertical take-off and landing) jet has completed its maiden test flight in Bavaria, Germany. Developed by a company called Lilium, the two-seater ‘Eagle’ prototype completed a range of complex manoeuvres in the sky, including a transition from hover-mode to wing-borne forward flight.

Lilium has now pledged to create a larger 5-seater version of the Lilium jet, with a view to begin fully-manned test flights as soon as 2019. The idea is that eventually, you’ll be able to book a Lilium jet just as simply as you would an Uber taxi. The startup’s current estimates put this reality as close as 2025:

“You won’t have to own one; you will simply pay per ride and call it with a push of a button. It’s our mission to make air taxis available to everyone and as affordable as riding a car.”

Check out the maiden flight below:

“Seeing the Lilium Jet take to the sky and performing sophisticated manoeuvres with apparent ease is testament to the skill and perseverance of our amazing team,” reads a statement issued by the company. “ to get to this point. The successful test flight programme shows that our ground-breaking technical design works exactly as we envisioned. We can now turn our focus to designing a 5-seater production aircraft.” 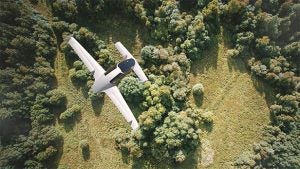 The original Lilium concept was first conceived in Glasgow in 2013, with the firm quickly moving to half-scale prototype testing within just two years. Eventually, Lilium hopes to create a “large network of small and inexpensive landing pads and central places in cities will allow you to quickly enter an aircraft anytime and fly anywhere you want.”

The company explains: “Leaving the city after a stressful day will soon be transformed into a thrilling ride. By travelling through the air, you’ll be able to avoid time-consuming traffic jams, while enjoying a magnificent view.” 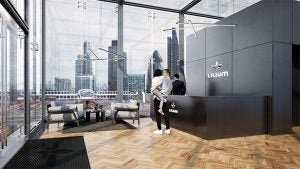 Lilium uses the journey from Manhattan, New York to JFK International Airport as the perfect example of where Lilium could shine. By taxi, the journey takes 55 minutes along 26km of road, costing the customer somewhere between $56 and $73.

But a Lilium jet – which boasts a range of 300km and a top speed of 300km/h – could use a more direct 19km route, covering the distance in a mere five minutes. It won’t necessarily have to cost the earth either; initial pricing is estimated at around $36 for the journey. However, Lilium hopes to get this down as low as $13 in the “near term” and $6 in the “long term”. 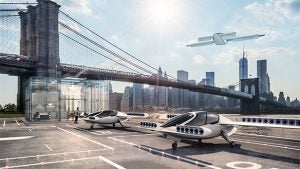 “Imagine reducing your one-hour commute from home to work down to 15 minutes,” the company explains. “Imagine never being stuck in traffic again, and paying not more than the cost of a train fare. Depending on your commute, you could save as much as two hours every day, time better spent with your friends and family, or pursuing other interests. All you would need to do is call your Lilium air taxi to meet you at the nearby landing pad.”

Unfortunately, it’s still very early days for the firm, and a working prototype isn’t evidence that Lilium could survive as a proper taxi-style business. It’s also not clear how an air taxi service would operate within the USA’s existing air transport infrastructure, and there’s every possibility Lilium will face legal hurdles before a proper launch is possible.

Still, we’re one step closer to a Harry Potter-style Ford Anglia, and that can only be a good thing.

What do you think of Lilium? Let us know in the comments.