2016 brought a lot of self-driving car developments, and it looks like this year is going to bring even more, as tech firms start offering their autonomous systems to manufacturers.

At CES 2017, we’ve already seen Intel, Mobileye, and BMW announce a forthcoming trial of 40 driverless cars, and now Nvidia’s getting in on the action.

The firm has published a video of its own driverless car, which it refers to as ‘BB8’ for some reason, navigating the roads of California and New Jersey.

Nvidia showed the clip during its Keynote event at CES, explaining how the car is outfitted with its DRIVE PX 2 AI self-driving computer.

We’ve seen videos of self-driving cars before from companies such as Tesla, and this latest clip doesn’t necessarily show anything we haven’t seen before, but it’s good to see another company has managed to develop a fully autonomous system.

In the video, the driver asks the car to take him to Starbucks, after which ‘BB8’ negotiates stop lights, stop signs and intersections, before driving on the freeway and passing control back to the driver.

The company is conducting live BB8 self-driving demos at CES with no one behind the wheel, just passengers in the back-seat.

As Nvidia explains in a release: “The demo showcases the power of AI, or more specifically deep learning. The cars we’re showing have been outfitted with our DRIVE PX 2 AI self-driving computer.

“With our DriveWorks software, and specifically running a deep neural network called PilotNet — developed over the last 18 months — the car is able to safely drive itself in this complex and dynamic environment.” 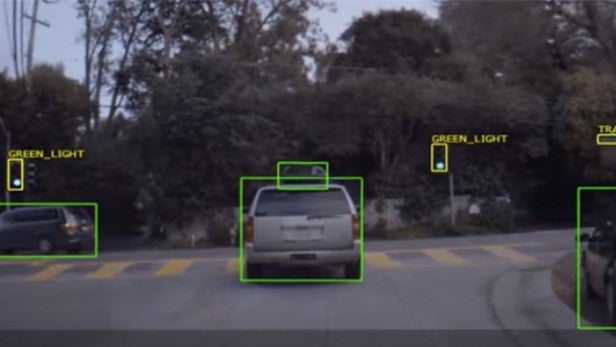 Nvidia also took the opportunity to announce it is collaborating with Audi to put advanced AI cars on the road starting in 2020.

Speaking at the opening keynote at CES, Nvidia founder and CEO Jen-Hsun Huang, joined on stage by Audi of America President Scott Keogh, said future Audi car models will use deep learning to tackle the complexities of driving.

The project will see the two companies use the NVIDIA DRIVE PX system, which is what’s powering the ‘BB8’ car in the video above.

Huang said: “Nvidia is pioneering the use of deep learning AI to revolutionize transportation. Audi’s adoption of our DRIVE computing platform for AI cars will accelerate the introduction of next-generation autonomous vehicles, moving us closer to a future of higher driving safety and new mobility services.”

Nvidia and Audi first announced their partnership at CES seven years ago, and have since produced the Audi MMI navigation and the Audi virtual cockpit, which can currently be found on a range of the automaker’s sedans, SUVs, and sports cars.

Stay tuned for all the latest from CES 2017, as there’s still plenty of big reveals to come.

Let us know what you think of Nvidia’s car in the comments.