ARM has launched a new display processor it claims is good enough to deliver 3K video at 120fps and stop VR headsets from inducing feelings of motion sickness, and power-efficient enough to sit inside standalone VR headsets, like the Oculus Quest.

The Mali-D77 DPU (display processing unit) is intended to give future phones and VR headsets a shot in the proverbial – it is apparently capable of rendering 4K and 3K video on such displays at frame rates of up to 120fps.

Why is 120 frames per second so important? According to Vassilis Androutsopoulos, a senior product manager at ARM’s client line of business, that’s the rate that’s “needed to reduce the overall latency to prevent motion sickness and achieve low persistence on LCD VR panels”.

These are not new observations – Almar Suárez, R&D project manager for digital design agency Tapptic, said last year that “a smooth and consistently high frame rate” of around 120fps for high definition video was one of the key things needed to sidestep VR motion sickness.

Persistence (better known as ghosting in the gaming world) is where an LCD displays a residual after-image of a sprite. It’s something that looks unsettling even on static gaming monitors, nevermind ones you’ve got placed millimetres away from your eyeballs.

As well as pumping out high resolution video at 120fps, the Mali-D77 includes support for a number of tricks specifically for VR devices, which are intended to not only to enhance the sense of immersion, but also better counteract feelings of dizziness sometimes experienced by users of VR headsets – this writer included.

These tricks include pre-distortion of images to mitigate any distortion caused by the shape of a headset’s lenses – called Lens Distortion Correction or ‘LDC’ – and pre-separating colour channels to counteract blurring caused by lenses, something called Chromatic Aberration Correction, which wonderfully abbreviates to ‘CAC’.

Better projection of virtual scenes based on the position of the wearer’s head and the headset in the 3D space, thanks to Asynchronous Timewarp, or ‘ATW’, is also key to to creating a more immersive and less nauseating experience.

ATW is by no means unique to ARM – a good explainer of the process can be found on the Oculus developers blog here. In short, ATW sees the images rendered by a system warped before they’re sent to the display, in order to correct for any motion which occurs after the scene is rendered. Should you happen to tilt your head to the left, or take a step to the right, it’s the perception of latency, which can drive some VR users insane, that should be reduced.

ARM says that because Mali-D77 does this, instead of a system’s graphics unit, it’s able to eke out some decent power savings, too.

Androutsopoulos points to a demonstration of VR game Gunjack 2 running on a Mali-D77 and an unnamed ‘Mali GPU-based SoC [system-on-chip]’:

“Where VR processing and composition are done on Mali-D77, there are significant DRAM memory bandwidth reductions – by 34 percent and 47 percent for the respective use cases.

“Thanks to the notable DRAM bandwidth reduction, as well as lower GPU+DPU power on the platform with Mali-D77, the overall SoC + DRAM power is reduced by approximately 180mW in both sets of use cases.” 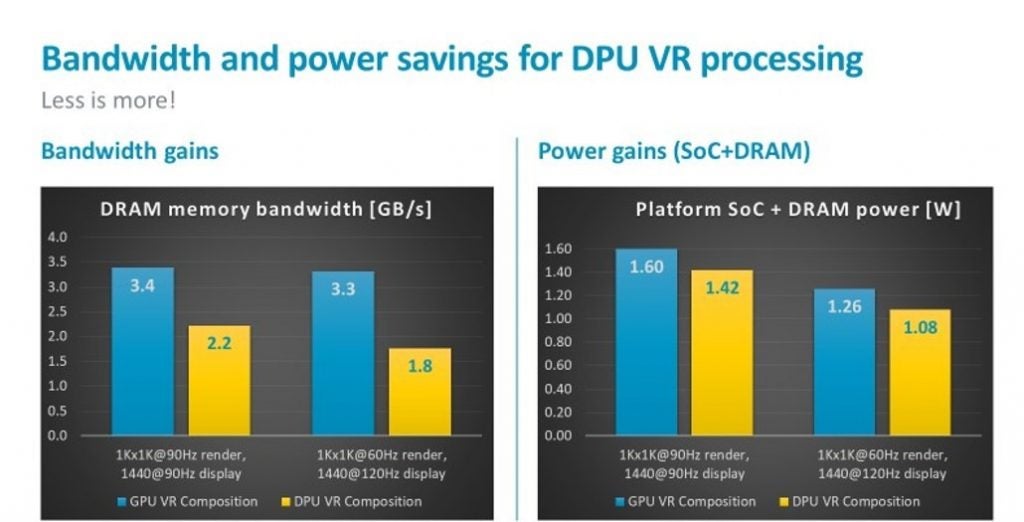 ARMis claiming that the Mali-D77 will be energy efficient enough to be able to sit in VR units that don’t need to be permanently tethered to a power supply.

The Oculus Quest, which we’ve recently reviewed, is powered by a Lithium-ion battery which gives you around two to three hours of use, and goes on sale later this month.

One of the best VR headsets we’ve tested, this features a 2880 x 1600 OLED display (1440 x 1600 per eye) and a 72Hz refresh rate. If ARM’s claims of motion sickness busting and support for 3K 120fps video are true, then the next generation of VR headsets could be the one to get nauseous naysayers off the fence.