Virtual- and augmented-reality headsets will be the size of regular glasses in the near future, according to Qualcomm.

Qualcomm senior vice president Raj Talluri made the claim during a keynote at the company’s 5G summit, attended by TrustedReviews.

“We’ve loaded our hardware into the Gear, plus a bunch [of other headsets] already. We’ve found that because of increases in processing, we can now build mobile VR devices where you don’t need to tether them to your phone,” he said.

“If you look at my glasses, they [VR/AR headsets] won’t look too different in a few years. They’re not there right now, but we can already see that eventually they will be.”

According to Talluri, the glasses will revolutionise the way people consume media such as sports.

“The way you watch sports, watch the action and broadcasting in general is going to be very different. With sports, the court side is the best seat,” he said.

“Imagine there’s someone sitting there with a 360 camera recording the action, and you’re in your living room wearing these glasses getting the same view as the them. Move your head and you can see exactly the same view.”

Talluri added: “With further advances you’ll even be able to get up and walk around.”

Qualcomm is one of many companies talking about 3D sports entertainment. Intel announced that Red Bull Media House and X Games will be using its RealSense cameras and Curie chips to create interactive 3D viewing experiences at CES in January.

The tech wasn’t showcased in VR, but Intel did also exhibit a number of augmented-reality headsets running Curie chips. 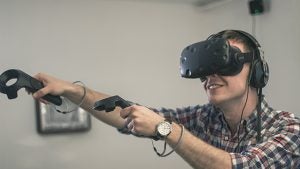 It’s all about 5G and pushing beyond 4K – apparently

“5G will let us stream high-quality 360-degree VR from anywhere. When you have the ability to offer a Gbps, low-latency, low-cost connection, you can take advantage of cloud processing. That’s what’s going to enable companies such as Magic Leap and many others to bring Hollywood-style graphics, in real-time, to large numbers of people,” he said.

The news comes mere hours after Qualcomm announced its first 5G modem: the Snapdragon X50. The X50 is designed to support early 5G trials and launches on Verizon in the US and in Korea with Korea Telecom, and will support 5Gbps download speeds.

“When I say beyond 4K, you may think why beyond 4K? If you look at a 4K screen compared to a lower-res one you may think it is better than regular HD. But if you take that, project it across your entire field of view, use some pixels for the left, some for the right, 4K may not be enough,” he explained.

“So to get true immersion you need a lot of wireless technology. Bandwidth up to 1GHz, multiple Gbps downloads for 4K movies […] With 5G we can support over 1,00,000 high-speed video connections within the space of a city block. That will allow VR and AR experiences to be had by everyone.”

Qualcomm isn’t the only company looking to use 5G to grow its AR/VR offering. Microsoft corporate vice president Nagraj Kashyap listed increased data connectivity as a key challenge facing numerous emerging technologies, during a separate keynote at the summit.

“There will be adoption of AR, VR and everything in-between. But these experiences will not come into commission if we don’t have high-speed mobile and home networks. We need to work on this as an industry,” he said.

“A world where the mobility of experiences, be it car, a drone or a mixed reality, we need continued improvements in mobile networks and cloud computing to fuel the next industrial revolution.”

Microsoft is currently working to release a wired, HoloLens, augmented-reality headset. It’s currently in development, but tech demos have shown it being used for everything from gaming to medical research.

Excited about watching the footie in 360 degrees using a nifty VR headset? Let us know in the comments below.