Broadband speeds in the UK seem to have stalled, with BT’s premier service for most homes topping out at an average of 67Mbps. Hope is on the horizon for faster speeds, and Trusted Reviews has visited the house of the first family to get Vodafone’s new Gigabit speed downloads.

Part of a nationwide rollout, Vodafone has teamed up with CityFibre to deliver its Gigafast 1Gbps fibre broadband to Milton Keynes. Micaela Perez Amaro, a mother of two and dance instructor, was chosen as one of the first recipients of the new service.

Running a speed test on a MacBook Pro connected via Gigabit Ethernet, we saw download speeds of 883Mbps and upload speeds of 929Mbps.

Wi-Fi devices are slower, but we saw speeds of 339Mbps download and 536Mbps upload. As newer devices with faster Wi-Fi chips are released, faster speeds will be possible.

“Before, we were getting 4Mbps upload and 30Mbps download speeds,” explained Perez Amaro.

With the old broadband, Perez Amaro told us, it was often quicker to drive to London to upload videos of her dance class,− than rely on the old copper-based broadband.

Vodafone’s Gigafast network uses CityFibre’s brand-new fibre-optic network, which is currently being installed in Milton Keynes. Using shallow trenches dug into the pavement, City Fibre is presently managing to lay around 450m of cabling per day with little interruption to the town. 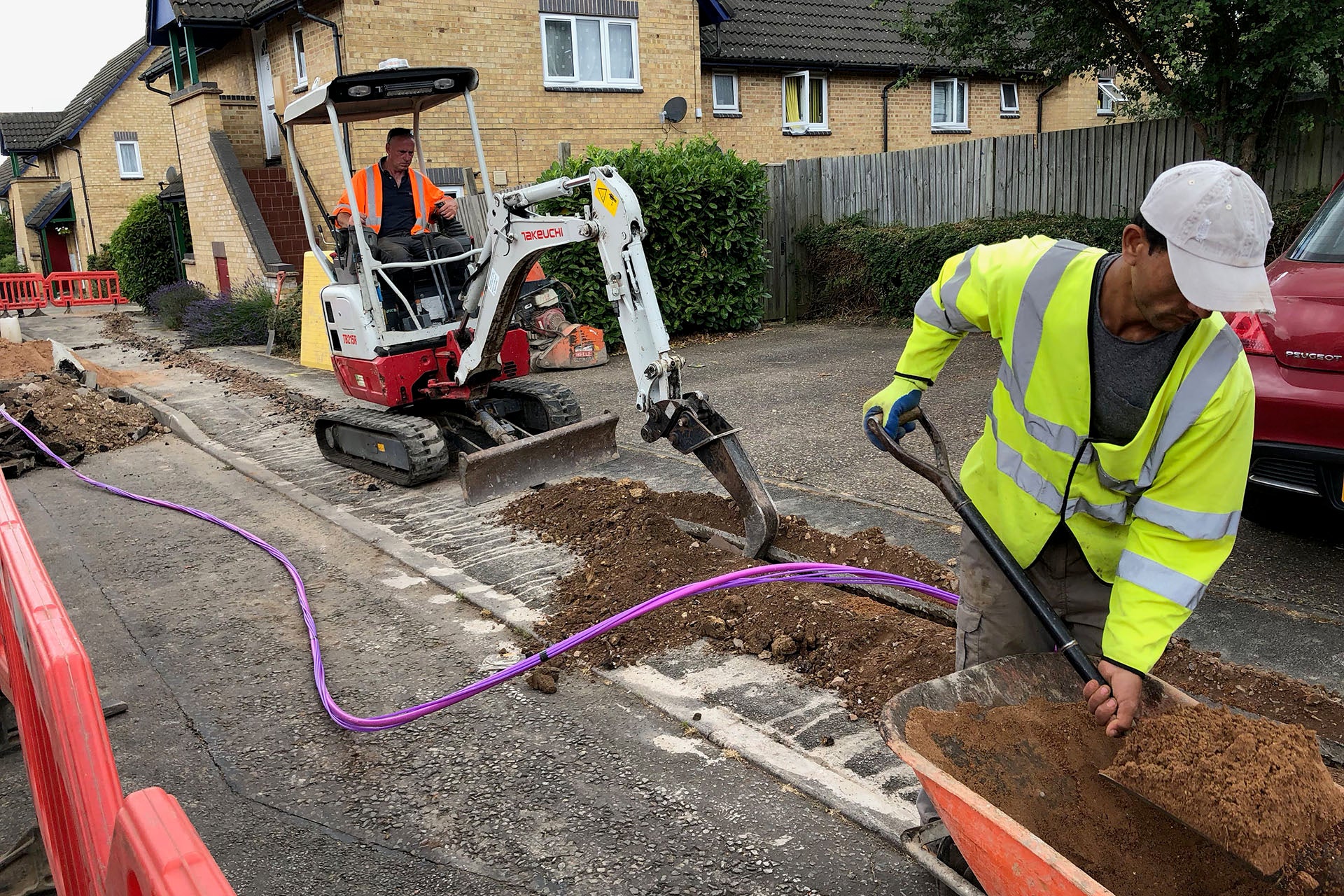 Rob Hamlin, commercial director of CityFibre explained the need for building a brand-new network: “Copper can’t keep up with usage. People have a real demand for a faster service, and the reliability that fibre brings is very important.”

Hamlin explained that the new network is built for high-speed internet and that it “doesn’t touch BT copper” at any point.

Vodafone has also developed a new 802.11ac router, which it says will deliver the Wi-Fi speeds required by the new service. However, people in larger houses may still want to invest in a mesh system or Wi-Fi extender to get better coverage.

As a fibre-only system, Gigafast doesn’t support landline calls at the moment, although Vodafone is looking at introducing them.

Previously, it was a requirement that phone lines provided over fibre connections were battery backed to allow for emergency calls, but Vodafone has worked with Ofcom. By asking if a customer can use a mobile to make emergency calls, the need for a battery-backed landline has been removed.

It seems like a sensible decision, given how infrequently most people use a landline.

Pricing hasn’t been announced for Gigafast yet, although we have been told that it will be “very competitive”. A full rollout will go live at the end of summer, and Vodafone has announced that Gigafast will also be available in Aberdeen, Peterborough, Coventry, Edinburgh, Huddersfield and Stirling.

With these cities, Vodafone is promising that it will reach a million UK homes by 2021, and it’s intent on hitting five million homes by 2025. Of course, Vodafone and CityFibre aren’t the only companies intent on delivering super-speed broadband. And recent Ofcom changes have come into play in order to accelerate FTTP adoption.

In February 2018, Ofcom published a package of measures to increase investment in full fibre broadband, including requiring that BT should open its telegraph poles and underground tunnels to rival providers, reducing the cost of laying fibre.

As a result of the decision, BT has promised to reach three million home and businesses by the end of 2020, currently covering more than 560,000 premises with the UK’s biggest network. It too will offer speeds of up to 1Gbps, although speeds in some areas that it offers FTTP, such as Cornwall, are currently capped at 300Mbps.

Gigaclear currently hits around 65,000 homes across rural Britain, with further expansion plans to hit 150,000 rural homes by 2020. And Hyperoptic is rapidly expanding its network, recently announcing that it’s adding 100,000 homes in the London Borough of Brent to its gigabit-speed network. It’s aiming for five million premises by 2025.

It’s clear that these increases in coverage are needed to increase the rollout and adoption of super-speed broadband.

Vodafone is also expanding its range of smart home products, including a new security camera and an alarm system powered by Samsung SmartThings.

Have you experienced issues with your broadband speeds? Share your experiences with us @TrustedReviews.