Forget the sea of bogus Pixel 4, TV remote for pets and Google Alphabet buying Spotify April Fool’s gags. This April Fool’s Day there’s only one joke you need to care about: Rabbids’s have invaded For Honor.

That’s right the little annoying Rabbids have jumped into the brutal world of For Honor, where vikings, medieval knights, samurai and ancient Chinese warriors fight for supremacy in a never ending war.

The gag appeared on 1 April and hasn’t got an official time frame for ending. While it runs the little white Rabbids replace the NPC soldiers normally seen in For Honor’s multiplayer deathmatches. The music and in game sound effects have also been tweaked for comedic effect.

The Rabbids have custom hats, weapons and battle cries depending on which faction they’re fighting for. Despite their non-threatening appearance they can still do significant damage if you give them time. You’ve been warned. 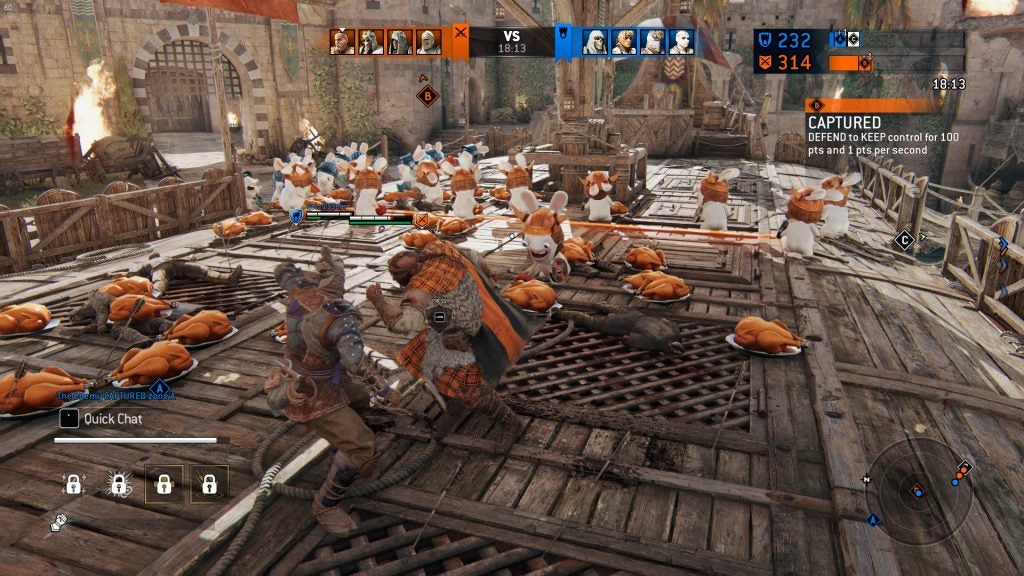 If like us the never ending sound of Rabbits in Ubisoft games has been a constant source of annoyance then we wholeheartedly recommend you take advantage of the gag and jump into For Honor now. Trust us the opportunity to enact your revenge and carve your way through the furry horde is an experience you don’t want to miss.

For those that missed it For Honor is a competitive multiplayer fighting game that Ubisoft originally released in 2017. It sees you take control of a famous historical warrior and carve your way through computer and human controlled enemies in a variety of different multiplayer modes. These include everything from one-on-one duels to huge team competitive conquests.

For Honor may not be a spring chicken in gaming years, but it still commands a significant following and is being continuously updated by Ubisoft. In January this year Ubisoft released a free update adding a new dark knight character called Vortiger and Harbor map.

For Honor isn’t the Ubisoft game to get the April Fools treatment. The company’s Rainbow 6 competitive shooter has also had teddy bears added to it. Though this isn’t nearly as entertaining in our mind.