We’ve finally got a proper glimpse of Valve’s forthcoming VR headset. The Valve Index Headset appeared on Steam temporarily, and pre-orders are opening up, so let’s take a look.

Trusted Reviews has compiled everything we know about the Valve Index including all the latest news, release date, specs, games and more ahead of its big May 1st reveal.

What is the Valve Index Headset

The Index Headset is Valve’s official entry into the virtual reality arena. Valve previously teamed up with HTC on the HTC Vive, but now they’re taking their own run at things, with a few unique tweaks.

The focus here is on best-in-class quality at the expense of everything else. The headset’s dual 1440 x 1600 RGB LCDs will, according to Valve, provide 50% more subpixels than OLED. This, mostly, should improve sharpness, but also greatly reduce the infamous “screen door” effect. Pack in a lightning fast refresh rate and some quality lenses, and it could offer

Looking at the design, it all seems fairly standard, although higher quality. Dont’ expect too many surprises, though: its a headset you can plonk on your head to immerse yourself in a different world. The only real thing to notice is that the Index has open-back integrated headphones, which will likely mean you have a vague idea of the noise going on around you while you play. This could be useful for those trying to avoid tripping over a cat/dog/spouse/child, but it’s definitely an unusual design. 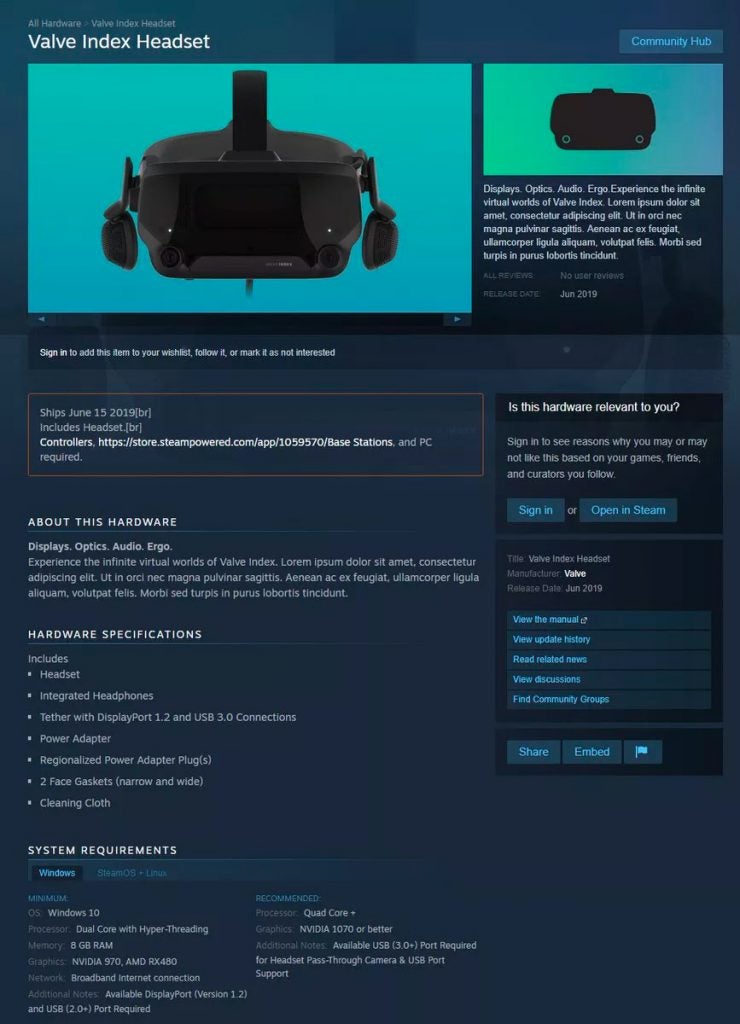 Valve has announced the price and release date for the Valve Index virtual reality headset. The advanced VR gaming device will cost a whopping $999 when it becomes available for pre-order on May 1, placing it in the same bracket as the HTC Vive Pro rather than the Oculus Rift S.

For that expenditure you’ll get the headset, the ‘Knuckles’ controllers and a pair of base stations that are used for tracking.

These piecemeal options are designed for those who already own the HTC Vive or Vive Pro headsets and accessories, which are compatible with Valve’s platform.

Specs on the Index headset are thin on the ground. We know from the pictured recommended specs that you’ll need a GTX 1070 graphics card, and we know that the index will support DisplayPort 1.2 and USB 3.0 inputs, but otherwise we’ve got nothing. Rest assured, as soon as we know more we’ll update the page.

The hand controllers, which were best known as Knuckles when they were tested with selected developers, have now been dubbed Valve Index Controllers, and they’ll be shipping with the device in June.

Interestingly, Valve’s headset also includes an IPS slider that will enable users to customise how far those displays sit from your eyes. There are built-in headphones that are actually more like speakers, while could add to the realism as opposed to having something shoved in your ears while placing.

Of course, you’ll also need a powerful PC to run the headset. You’ll need Windows 10, Steam OS or Lunix running on a computer with 8GB+ or RAM and an Nvidia GeForce GTX 970+ or AMDD480+. You’ll need USB 3.0+ for the headset cameras, with a dual-core CPU with hyper-threading.

Fancy another VR headset? Let us know your thoughts on @TrustedReviews