The Ubisoft E3 2019 press conference is over, and it was arguably one of the strongest showings so far. We got a detailed look at the next Watchdogs game set during a post-Brexit London, saw a trailer for a wacky and sporty roller derby game and were teased with a glimpse of a new Zelda-esque game called Gods and Monsters.

We’ve listed all the big reveals below so you can stay up to date with all of the major Ubisoft announcements.

Missed the Ubisoft E3 2o19 conference? No worries, as you should be able to watch it all again via the video below.

If you don’t have the time to watch, we’ve also listed all the big Ubisoft announcements below.

New game Gods and Monsters has an awesome Zelda vibe

The biggest shock of the E3 conference was no doubt Gods and Monsters. A trailer showed off one of the most gorgeous animated worlds we’ve ever seen in a video game, as mythical monsters roam the lush plains. A lone sword-wielding hero stands atop a hill until an evil looking griffin lunges towards him. Fortunately, he’s swift enough to fight off the monster and deal the killing blow.

The trailer then cuts to black, revealing that this adventure epic has been developed by the Assassin’s Creed Odyssey creators. That’s no surprise, as Gods and Monsters sees you take on many monsters from Greek mythology. The YouTube description states “tricky trials, treacherous dungeons and heroic feats await” which sounds very much like The Legend of Zelda.

Ubisoft confirmed Gods and Monsters will launch on 25 February 2020. We can’t wait to start slaying monsters.

New sports game Roller Champions very much looks like a rollerbade version of Rocket League, with the wooping crowd and frantic action. This could very well be the next multiplayer game we’ll all be addicted to in the office.

A free demo for Roller Champions will be available to play between 10 June and 14 June, so you can start playing right now. There doesn’t seem to be a release date just yet though.

Ubisoft has finally adopted the Netflix model, offering a subscription service that will give you a huge catalogue of Ubisoft games for £14.99 a month. 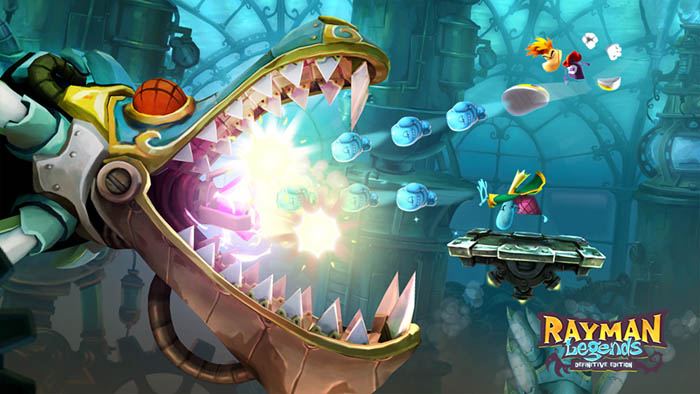 The new Rainbow Six game was finally confirmed, with the title revealed as Quarantine. Not much details were released, besides that you’ll be playing in 3-player co-op missions.

The short teaser showed a soldier flailing on the floor, as creepy shadows could be seen in the distance. Seriously, it looked like a horror game at first. Turns out that an alien parasite has infected humans, so you’re not just fighting your typical humans here. Quarantine will be available in 2020 on PS4, Xbox One and PC.

Okay, so this isn’t quite Super Smash Bros., but seeing all the iconic Tom Clancy characters, from Splinter Cell to Ghost Recon, in a mass shootout was still very cool. This is mobile game called  Tom Clancy’s Elite Squad, where you take part in 5v5 battles. You will be able to upgrade your weapons and gear, and challenge online opponents in the PvP arena or work together in the Guild Wars mode.

Think the Keanu Reeves reveal for Cyberpunk was cool? Wait until you see Jon Bernthal and his pooch take the Ubisoft stage to reveal the new Ghost Recon Breakpoint trailer. He will be the leader of a an enemy group of solider, and from what we’ve seen from The Walking Dead and The Punisher, he’s clearly going to make a great villain.

The beta for Breakpoint will go live 5 September, while the game will officially launch on 4 October 2019. Ubisoft also teased Terminator flavoured content, but we can only speculate what that is for now.

Lovable Adventure Time duo Finn and Jake were confirmed to be a arriving on the free-to-play fighting game Brawlhalla, making the perfect crossover with the candy coloured animation fitting right into the animated world.

Ubisoft confirmed this update is available to download right now, so what are you waiting for?

Hacking adventure game Watchdogs has ditched the USA in favour of England, as the Ubisoft series takes a trip to London, complete with Tube stations, black cabs and… gun-equipped drones? This is a very different London to the one we know.

Ubisoft showed off an in-depth gameplay demo, with the protagonist rocking a classic cockney accent, but once he was shot to death, we didn’t see him respawn. Instead, the player was forced to choose a new character with different skills and stats. In this case, it was a granny that had a mini robotic spider as an accomplice.

After the demo, Ubisoft revealed that the aim of the game is build a resistance against the corruption spreading through London. Any NPC within the world can be recruited and controlled, with every character being fully simulated. Be a granny. Be a teenager. Be a postman. The choice is yours.

What are you hoping to see from Ubisoft at E3 2019? Let us know on Facebook and Twitter @trustedreviews or email the editor below.