At its annual TV and Audio showcase, Philips outlined its OLED models for the year and it’s going XL for 2021.

Philips unveiled its MiniLED TV range but don’t think they’re replacing the OLEDs in status. Philips’ previous OLEDs were some of the best TVs of last year, and the latest OLED TVs will serve as the pinnacle of its 2021 line-up.

Philips has made the difference between its new OLED806 and OLED856 clearer than before. Previously, the main difference was the style of stand – that remains the case with the OLED806 using dual metal “sticks” and the OLED856 a T-bar stand – but the OLED806 now comes in more sizes with 48-, 55-, 65- and a gigantic 77-inch screen.

Like the MiniLEDs, the OLEDs get the 5th Gen P5 AI processor that Philips says will take its market leading picture performance to higher levels. New for the P5 is the presence of Film detection, which will flag film content and suggest the viewer switches to a more compatible picture preset, such as Filmmaker Mode. It also incorporates the TV’s light sensor to ensure contrast for either SD or HDR is optimised to fit ambient light levels of a room.

Philips continues to back HLG, HDR10, HDR10+ and Dolby Vision HDR formats. The 806/856 will also support HDR10+ Adaptive that combines HDR10+ dynamic metadata with real-time ambient light information to optimize brightness levels on a scene-by-scene basis. Dolby Vision IQ, however, is not listed as part of the spec. 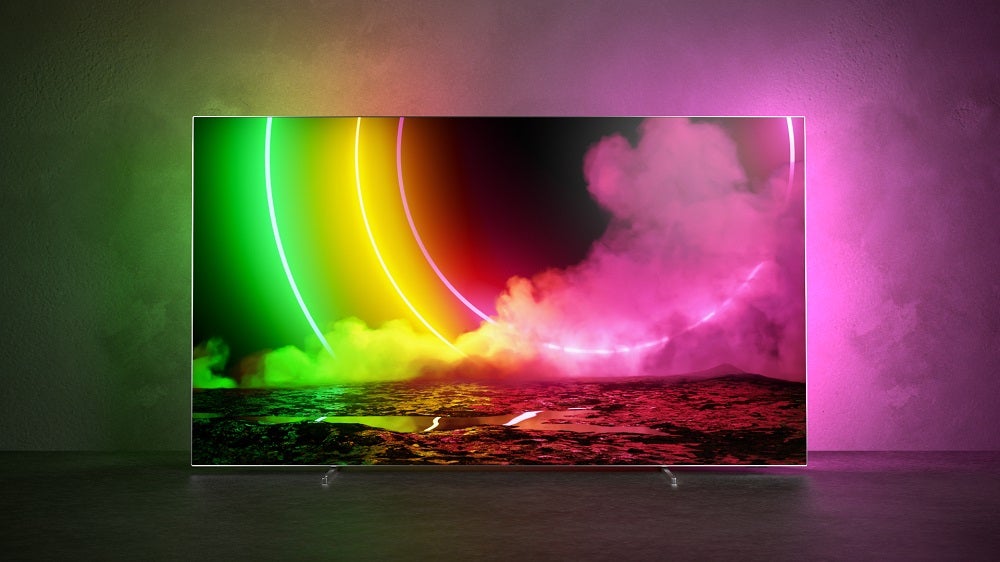 Gaming has been upgraded, with the latest sets getting HDMI 2.1 functionality. That includes eARC, ALLM and VRR for 4K from 40Hz to 120Hz. There’s also AMD’s FreeSync Premium Pro VRR technology and and Auto Game mode.

Gamers and sports fans who choose the OLED806 will be able to select the Fast Motion Clarity Feature, which avoids the motion blurring effect to produce a gradual transition from one image to the next.

The new OLED’s sound comes from a 50W 2.1 sound system that features a dedicated triple ring, rear facing, bass driver supported by four passive radiators. They’ll boast Android 10 TV OS, so Google Assistant voice control and Chromecast are built-in. We’ve asked Philips about Google TV support and they said they’re in “on-going conversations” and can’t confirm at this stage. Alexa compatibility is the “Works with” version, so operation will be through an Alexa-enabled speaker/device.

OLED burn-in has been a hot topic, and the 806/856 TVs will benefit from a “version of” Philips TV’s anti-burn technology that uses advanced logo detection to detect static content and gradually reduce its intensity to avoid burn-in. Philips aims to do this without compromising the brightness in other parts of the screen.

When do they go on sale? All we currently know is that they’re due in the first half of 2021. If it’s like the schedule for 2020’s TVs, we expect sometime in early summer. Prices are still yet to be confirmed.