TRAPPIST-1 System Explained: Wondering what an exoplanet is? What exactly has NASA discovered in the depths of the Milky Way? We take an in-depth look at the newly-discovered exoplanets.

This week saw NASA astronomers discover seven Earth-sized planets in our own galaxy. And while we hear about the odd planet being discovered every now and then, this is a big enough deal for Google to introduce a new Doodle.

Why has this particular discovery been immortalised in Doodle form? Well, of these seven newly-detected planets, in the TRAPPIST-1 system, three are within the so-called ‘Goldilocks’ zone, which means they will likely be hospitable to life. Intrigued? We’ve explained the whole thing below, for your reading pleasure.

TRAPPIST is an acronym for Transiting Planets and Planetesimals Small Telescope. Poetic, isn’t it? The name itself actually refers to the star at the centre of the newly-discovered system. TRAPPIST-1 is located in the constellation Aquarius and is much smaller than our own sun.

In fact the ‘ultra-cool dwarf star’ is around 10 times smaller and 2.5 times cooler and is closer to the size of Jupiter. NASA says that if our sun was the size of a basketball, the TRAPPIST-1 star would be the size of a golf ball.

The term TRAPPIST-1 is also used to refer to the solar system itself, which we now know includes seven planets which orbit the star very closely. In fact, if the planets themselves, simply referred to using letters ‘b’ through ‘h’, were in our own solar system, they would fit inside the distance between the sun and Mercury.

How did we discover TRAPPIST-1?

Back in May 2016, a team of researchers used NASA’s Spitzer Space Telescope, an infrared telescope that trails Earth as it orbits the sun, to identify three exoplanets, so-named due to the fact they exist outside our own solar system. Following the discovery, NASA made use of several ground-based telescopes, including the European Southern Observatory’s Very Large Telescope, confirming the existence of two of these planets while discovering five extra ones.

The team behind the research, led by lMichael Gillon at the University of Liege, Belgium, used the ‘transiting method’ to identify the planets themselves, whereby short stoppages in the light of the central star are used to identify orbiting bodies as they pass across the face of the sun.

The team was also able to measure the sizes of the seven planets in the TRAPPIST-1 system, sharing their findings in the journal Nature and announcing the discoveries at NASA headquarters this week.

Why is TRAPPIST-1 a big deal?

Well, first off, the TRAPPIST-1 system is the first known system of seven Earth-sized planets around a single star. Three of these are within the habitable or “Goldilocks” zone, which means that while all the planets could be home to liquid water – the key to life – the three in the habitable zone are most likely to contain liquid water, and therefore be the most likely to support life.

Put simply, planets E, F, and G are the most likely to harbour liquid water, and could be home to some form of life. Though, at this point, it’s all theoretical. 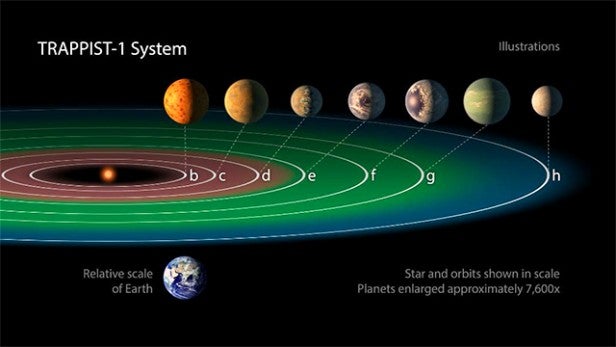 The discovery is also noteworthy because the TRAPPIST system is less than 40 light years away from our own planet. That’s about 235 trillion miles away, which, believe it or not, is relatively close to us.

Here’s Thomas Zurbuchen, associate administrator of the agency’s Science Mission Directorate in Washington, on the importance of the findings:

“This discovery could be a significant piece in the puzzle of finding habitable environments, places that are conducive to life. Answering the question ‘are we alone’ is a top science priority and finding so many planets like these for the first time in the habitable zone is a remarkable step forward toward that goal.”

According to NASA, which has managed to calculate the masses and densities of six of the TRAPPIST-1 planets, the densities suggest every planet in the system is likely to be rocky. 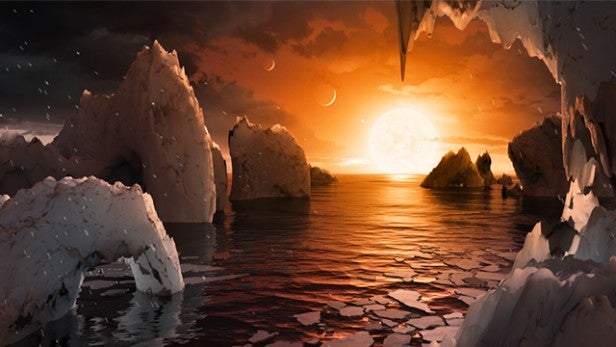 But perhaps the most interesting thing about these planets is that they don’t have days and nights. The team behind the discovery believes each exoplanet takes the same amount of time to orbit its sun as it does to complete one rotation on its axis. That means that one side of each planet always faces the sun, resulting in a constant light and dark side. One half of each planet is in perpetual daylight, while the other is in constant darkness.

According to researchers, such conditions could cause massive winds and temperature gradients, causing one half of each planet to burn, while the other half freezes. If that’s the case, it somewhat puts the whole ‘habitable to life’ thing in question.

And while the planets’ tight orbit of the TRAPPIST-1 star allows them to stay warm enough in the light of a much dimmer star than our own sun, there are further risks that come with being so close to the star. . Lead author of the study, Michael Gillon, has said the TRAPPIST-1 star doesn’t look like it produces enough radiation for that to be an issue, but there’s no way to know for sure.

Unfortunately, the whole system is too far away, and the planets too close to the central star for researchers to actually produce images of them. But according to NASA, if you were standing on one of the planet’s surface, you could potentially see other close-by planets in the sky, which could appear larger than the moon in our own sky. The planets are so close together, that you could theoretically make out geological features or clouds of neighbouring worlds.

So, now we know the planets are there, and that they could be home to life, what’s the next step? Well, further research will be carried out to try to determine whether the planets are indeed rich in water. Researchers will also try to confirm whether any could have liquid water on their surfaces. In other words, there’s a long way to go until we have proof of life on other planets. But the TRAPPIST-1 discovery is one of the most exciting developments in that search.

Michael Gillon, lead author of the paper and the principal investigator of the TRAPPIST exoplanet survey at the University of Liege, Belgium, said:

“The seven wonders of TRAPPIST-1 are the first Earth-size planets that have been found orbiting this kind of star. It is also the best target yet for studying the atmospheres of potentially habitable, Earth-size worlds.” 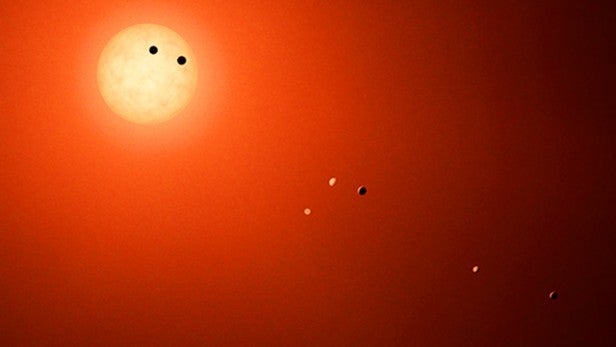 For the time being, further work is being done to discover more about the seventh and farthest exoplanet from the TRAPPIST-1 star. It’s mass has not yet been determined, and scientists believe it could be an icy, “snowball-like” world. It’s also possible that further planets will be discovered in the near future, with plans to use NASA’s upcoming James Webb Space Telescope, launching in 2018, to carry out further studies.

“Spitzer will follow up in the fall to further refine our understanding of these planets so that the James Webb Space Telescope can follow up. More observations of the system are sure to reveal more secrets.”

Whatever happens next, the TRAPPIST system offers the best opportunity we’ve yet had to study the atmospheres of Earth-sized planets. It also brings us one step closer to finding a ‘second Earth’. As Thomas Zurbuchen teased at a press conference on February 22 : “The discovery gives us a hint that finding a second Earth is not just a matter of if, but when.”

Let us know what you think of the new discovery in the comments.