With the petrol/diesel doomsday now set in stone, hybrids are about to take off in a big way – and the Toyota C-HR Hybrid could be the perfect entry point for your eco-revolution.

Few cars have been so frequently lampooned as the Toyota Prius, an early-to-market hybrid that struggled to convince petrolheads when it launched. Now the Prius has flooded Britain’s roads (cheers, Uber), and it seems there’s no escaping the steady creep of hybrid motors in the UK.

Toyota’s eco-friendly pedigree continues with the Toyota C-HR, which has recently been upgraded with its own full-hybrid powertrain – a 1.8L 2ZR-FEX engine that runs on a mix of petrol and pure electric power. 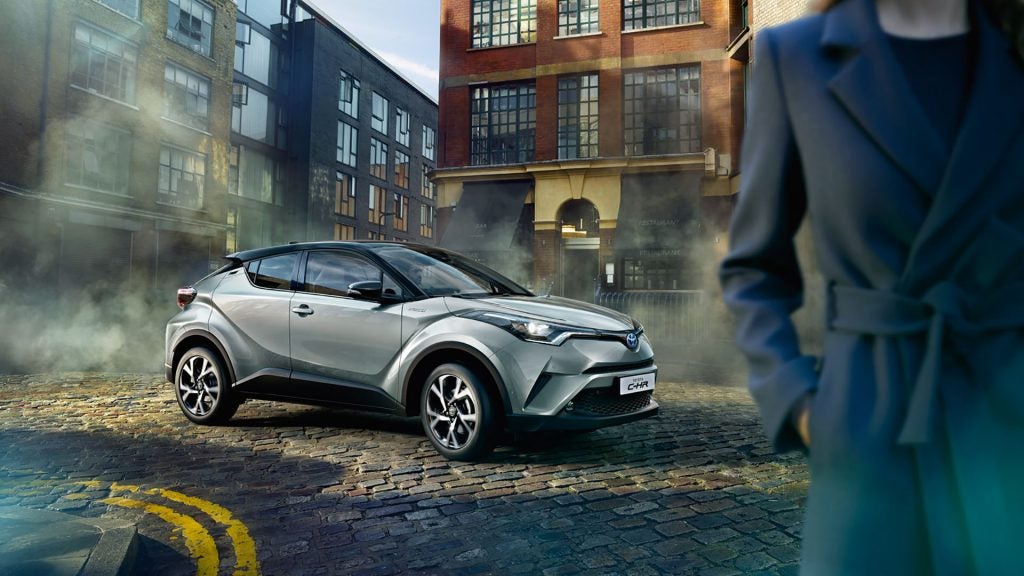 1. It has a space-age design

Forget the hybrid stuff for a minute; the Toyota C-HR’s biggest pull for many people will be its striking, space-age design.

Car makers have a habit of making their hybrid and all-electric models look a little futuristic, but the Toyota C-HR looks like it’s been pulled straight from the set of Tron. All versions of the car feature the same bold, angular exterior, with sharp lines carving out segments that jut outwards aggressively.

The Toyota C-HR reminds me a little of Jaguar Land Rover’s ready-to-pounce aesthetic, with a sweeping roofline that slopes backwards and down sharply – there’s definitely an air of Range Rover Evoque, here. This powerful stance means that the Toyota C-HR looks a lot more imposing than its compact crossover design would normally appear. 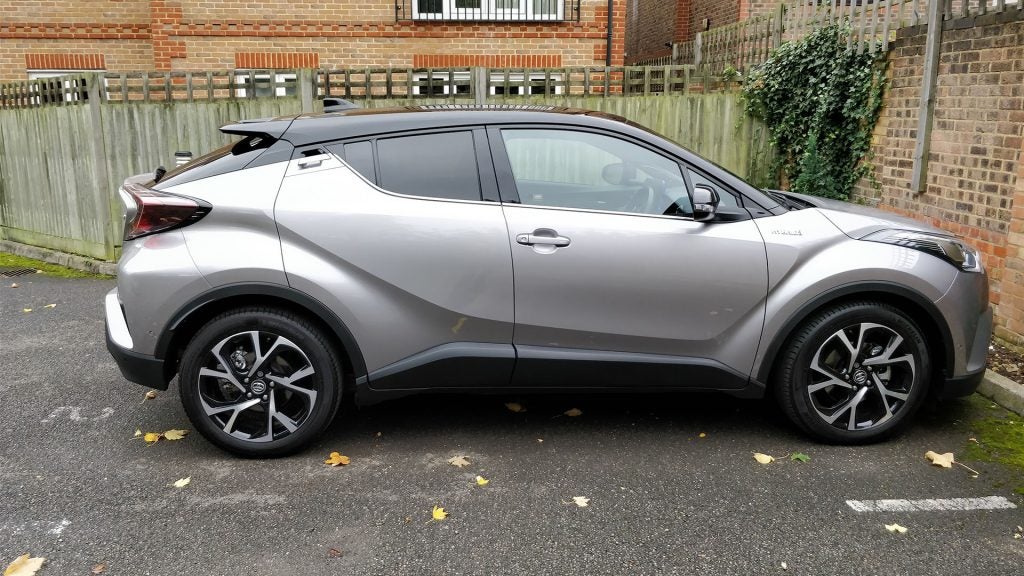 The wheelbase, for instance, measures just 2,640mm, which is only about 10cm longer than the Nissan Juke – one of the smallest sub-compact SUVs on the road. It’s just 1,795mm wide too, which undercuts even the entry-level Range Rove Evoque (1,900mm). Regardless, the Toyota C-HR looks big and powerful on the road – all thanks to the muscular haunches, a high bonnet, and the generally squat stature.

Peek inside the five-door SUV and you’ll find a comfortable and spacious interior too. You get about as much legroom overall as you’d find from a Nissan Qashqai, which is the car many hail as kickstarting the SUV sales surge.

There’s a great selection of instrument panels and infotainment systems that I’ll detail later, but needless to say there’s no shortage of buttons to prod. This is a little overwhelming at first, but most of the apparatus benefits from adequate and clear labelling. 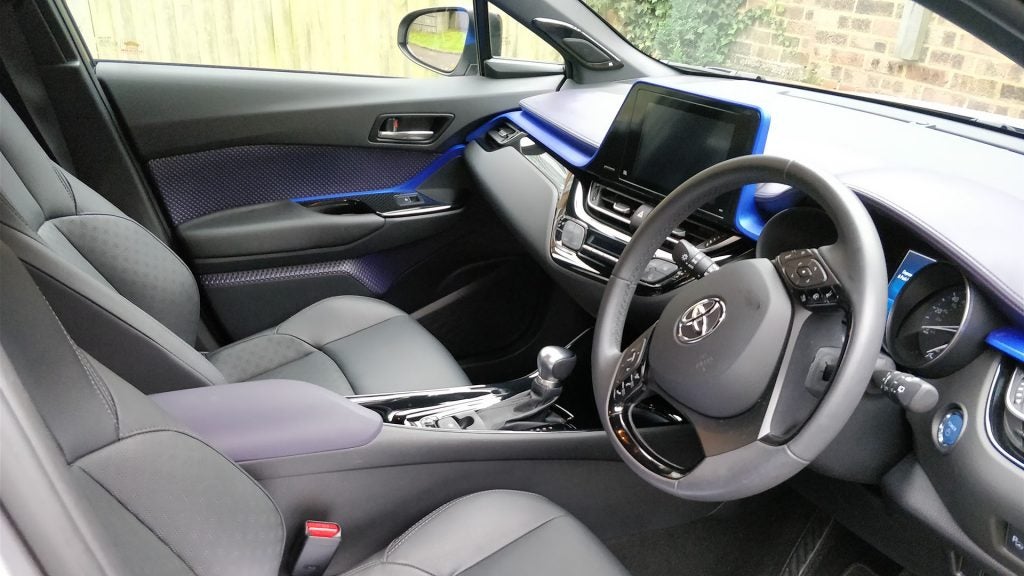 Most of the interior surfaces are smooth and sloped – which is a sharp contrast to the car’s exterior – but the dashboard is interrupted by a ridged, blue framing that brings the carries the futuristic vibe into the inside of the car.

All in all, it’s a seriously slick design, inside and out.

It would be remiss of Toyota to release such a future-fondling vehicle without loading it with similarly space-age technology. Fortunately, one of the big perks about the Toyota C-HR is that it’s stuffed with an impressive amount of tech for its on-the-road price.

The central element to Toyota’s C-HR Hybrid is the Toyota Touch 2 with Go infotainment system. Drivers and passengers interact with the system through an 8-inch touchscreen that’s built into the centre of the dashboard. 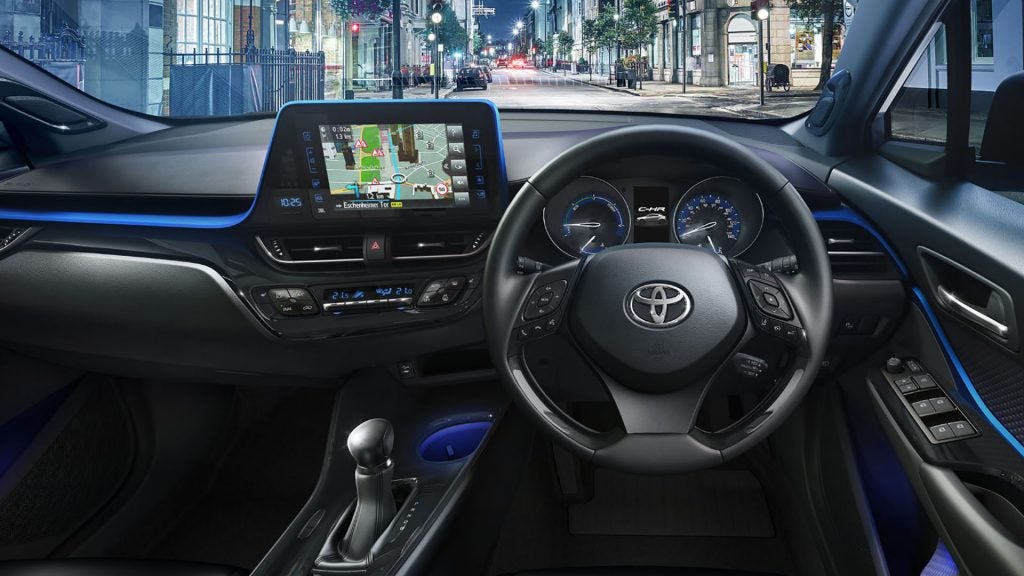 This system does all the usual bits you’d expect, including satellite navigation and Bluetooth-powered music playback. It also features built-in online connectivity, and boasts aux-in and USB ports.

Probably the most useful feature, however, is the parking assist. The back of the Toyota C-HR Hybrid is fitted with a rear-view camera that helps you navigate into tricky spots. An grid system that’s virtually bundled onto the back of your car – and displayed on the Toyota Touch 2 screen – shows how best to aim your car into the space, and warns you if you’re at risk of backing into a wall.

The car is also fitted with a dual 4.2-inch TFT multi-information display for general driving metrics, which sits behind the steering wheel. 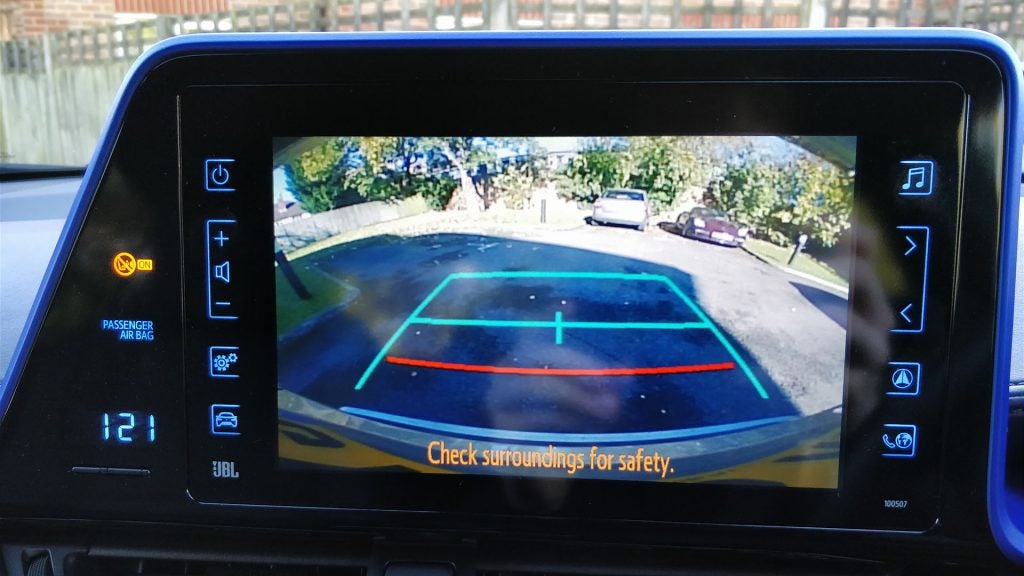 Toyota has loaded the C-HR Hybrid with a smart entry system and push-button start, but that’s only the tip of the iceberg when it comes to in-car tech. You’ll also benefit from automatic high-beam lighting, an electric parking brake, and rain-sensing front wipers that clear your screen automatically.

You’ll also get some driving help too, courtesy of several smart features. For instance, Lane Departure Alert will track road lanes, and alert you with noise if you start to drift – very helpful during a late-night journey. The wing mirrors are also fitted with lights that glow if it’s unsafe to change lanes; the car will measure the speed of vehicles in the next lanes to work out if you can safely move over.

A pre-collision system – which supports pedestrian detection – will warn you if you’re about to crash, and adaptive cruise control takes all of the pain out of motorway driving, slowing and stopping in kind with the traffic ahead. 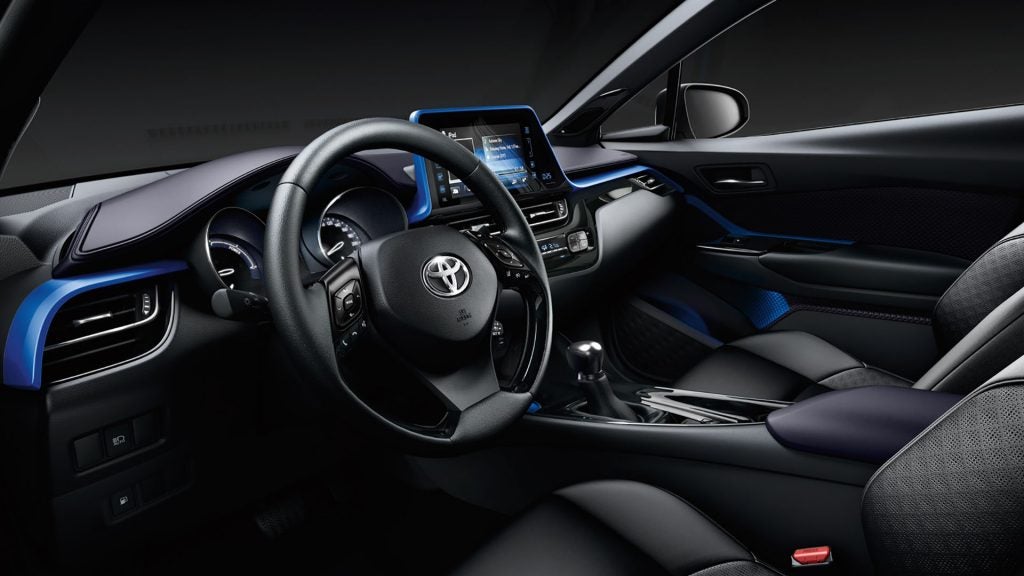 3. It’s a hybrid, and seriously economical

The UK has already committed to banning the sale of new petrol and diesel cars by 2040, and automakers are setting much earlier deadlines themselves. With the clock now ticking, it’s probably time you considered picking up a hybrid of your own.

The main reason many people will be buying a hybrid engine is for fuel economy. Unlike a standard petrol or diesel engine, a hybrid powertrain will utilise electric power generated while driving to reduce the dependence on fuels that generate bad emissions. This means you can expect a fuel economy of up to 74.3mpg with the Toyota C-HR Hybrid (great for an SUV), and 86g/km of combined CO2 emissions. 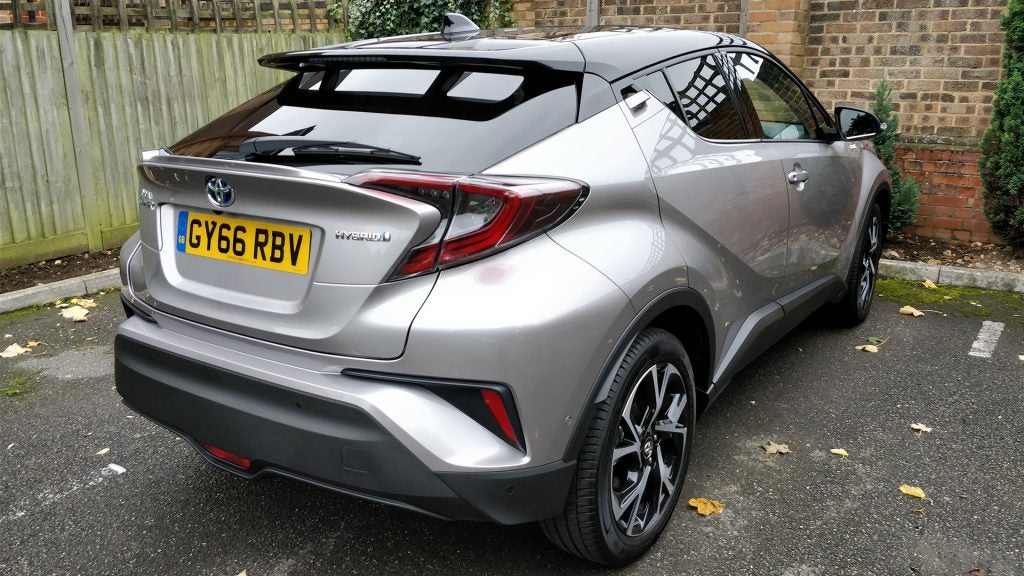 But the Toyota C-HR Hybrid goes one step further; it’s actually a “full” hybrid, rather than a “mild” hybrid. The difference is that unlike some hybrid cars, the Toyota C-HR is capable of running on electric power alone.

In fact, Toyota has engineered it to “run as often as possible” on electric power, in order to save fuel and reduce exhaust emission levels. You can see when your car’s running on electricity, because a green EV icon will light up in the instrument panel.

Toyota has also helpfully fitted the car with a dedicated EV mode button, allowing the driver to switch the car entirely onto electric power. This means you’ll be able to drive the car at low speeds over short distances with zero emissions and fuel consumption – perfect for protecting your wallet (and the environment) when driving in slow-moving traffic. 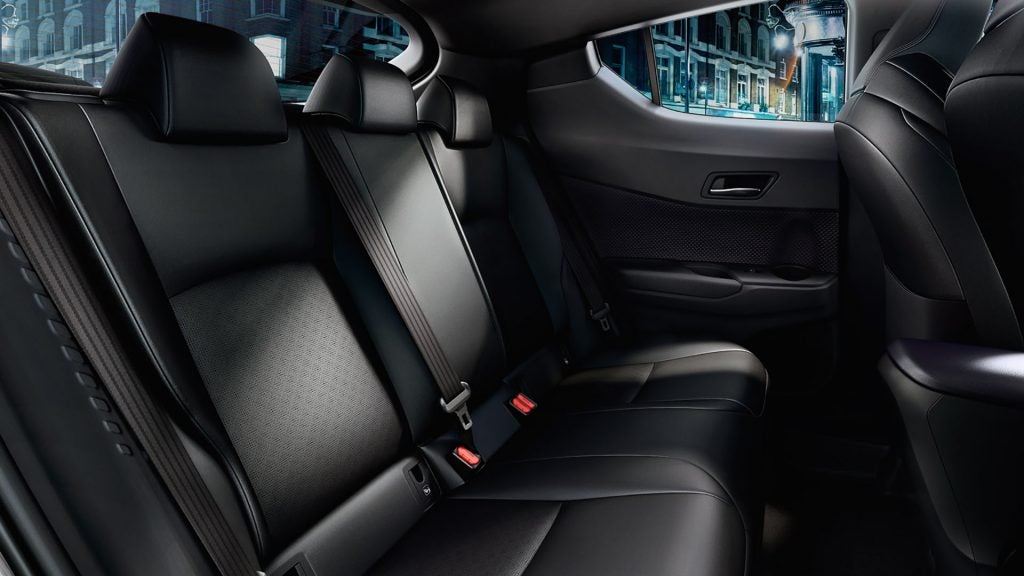 The caveat is that you can only do this when there’s sufficient charge in the hybrid battery for the EV mode to be engaged. It also depends on your smooth and gentle use of throttle, and ensuring you’re not using features that excessively draw on power, like air-con or the heated rear-screen.

To maximise your potential EV performance, the best tip is to brake gently when you’re coming to stop at traffic lights. This increases the amount of electric power gained from the car’s regenerative braking system. Smooth acceleration will also help efficiency, so it’s important to try to keep out of the “power” band on the eco-monitor in the instrument panel (which sits where the rev counter would usually live).

4. It’s actually not that expensive to buy

The good news is that although it’s a seriously slick car that’s cheap to run, it doesn’t cost the earth. For a brand new model straight from Toyota, you’ll pay a starting price of just £21,065. 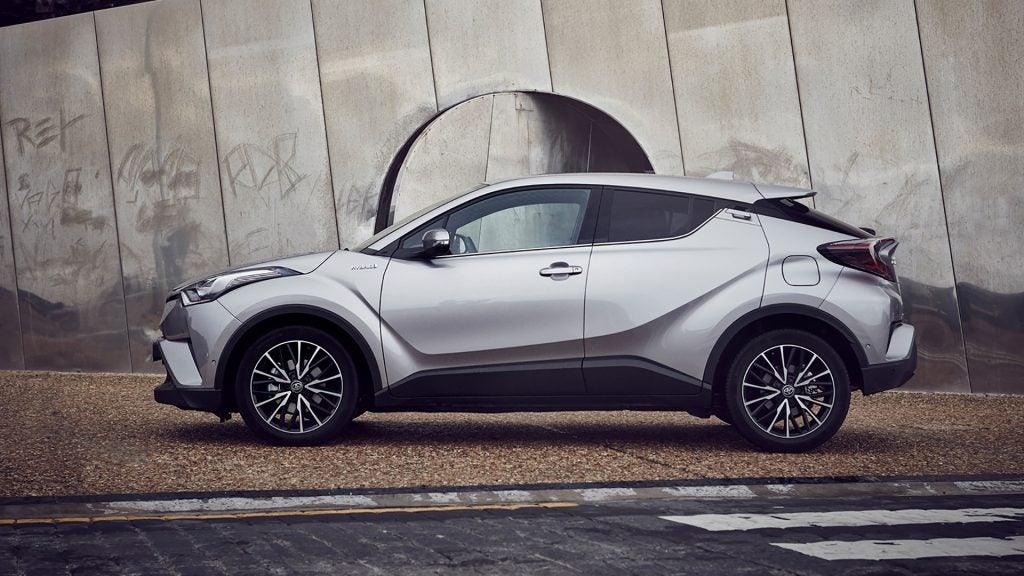 Even with all the bells and whistles, the cost doesn’t rise significantly. Trusted Reviews had the chance to try out a high-spec model with the 1.8L Hybrid CVT power train and a Metal Stream Bi-Tone paintjob, and it came to an on-the-road price of £28,085.

We also had some additional extras, with a pearl white pearlescent paint (£545), and a premium option pack (£1,595) that gets you full black leather seat upholstery and a JBL premium audio system. This brought the entire cost of the car up to £30,225 – still below the £30,545 starting price of a Range Rover Evoque.

If you’d rather buy used, consider the following:

Alternatively, check out some more images below: 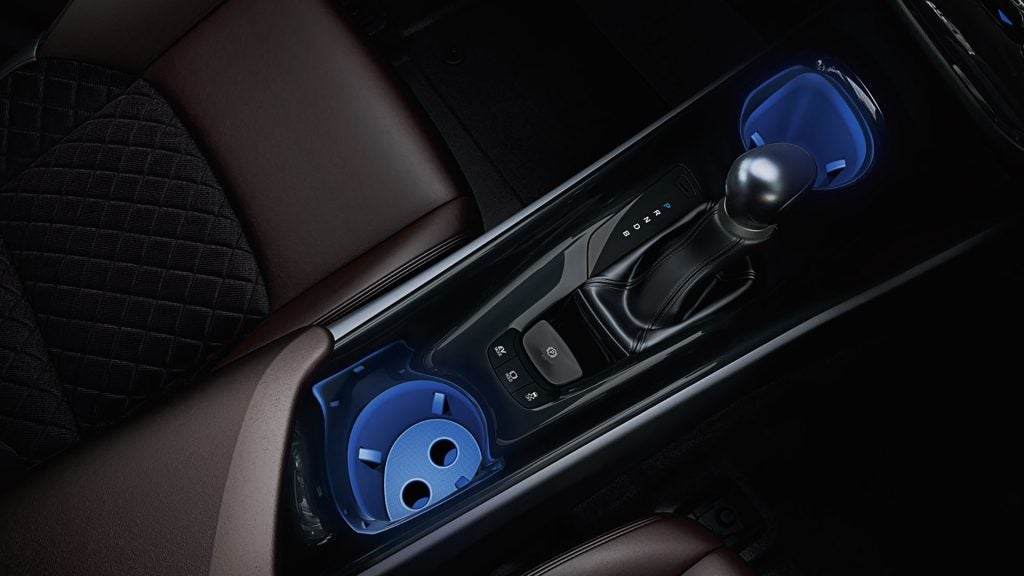 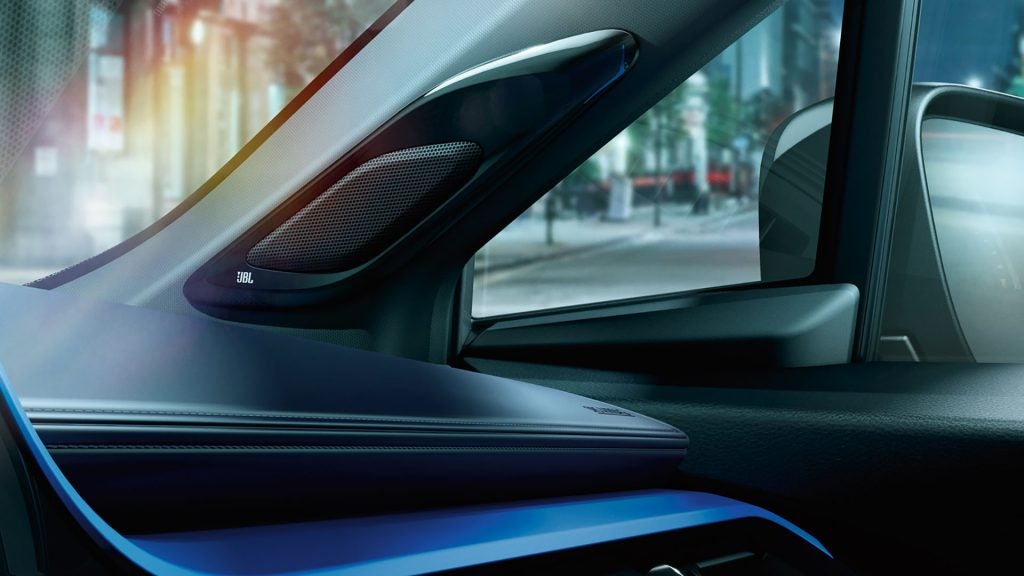 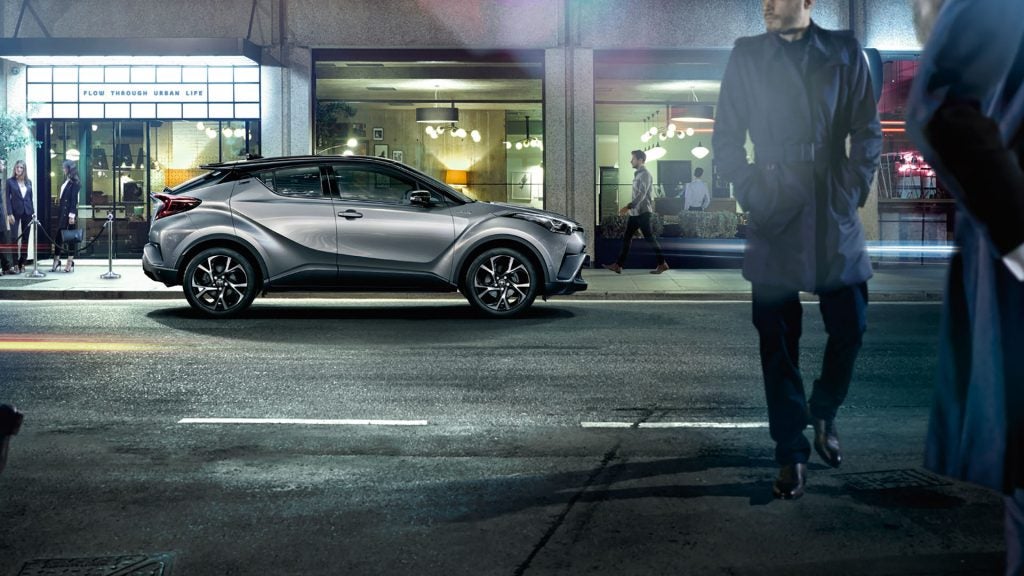 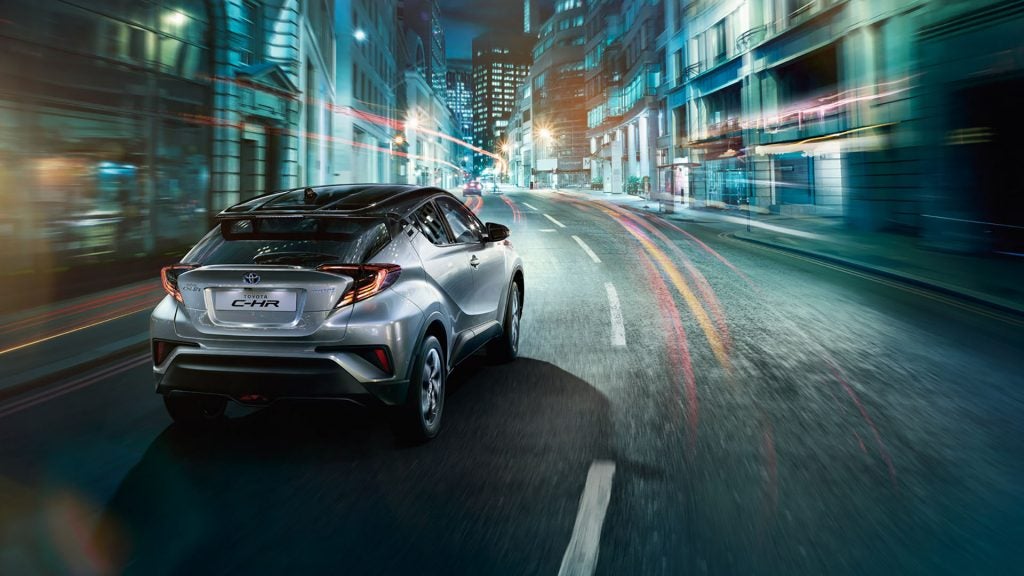 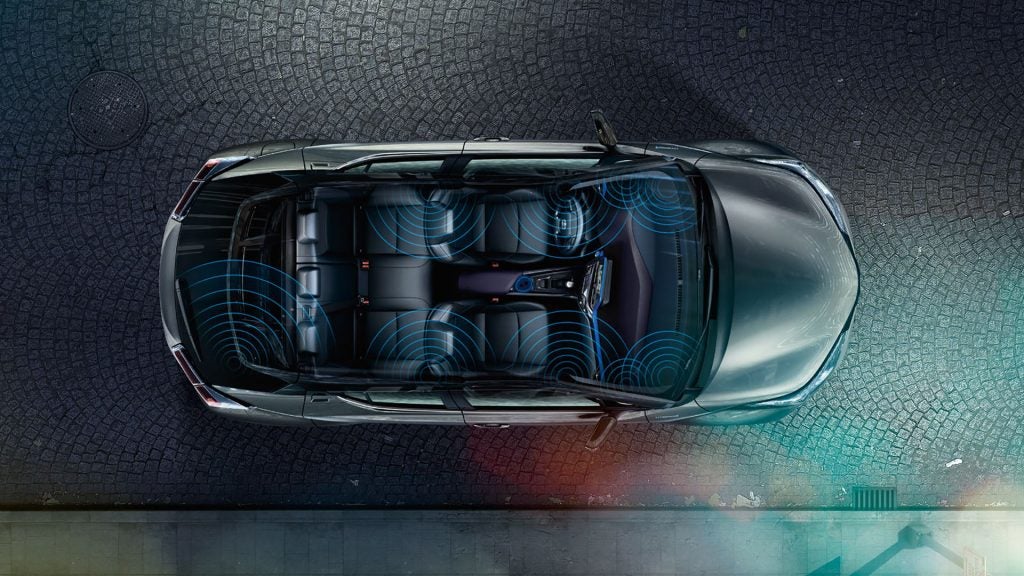 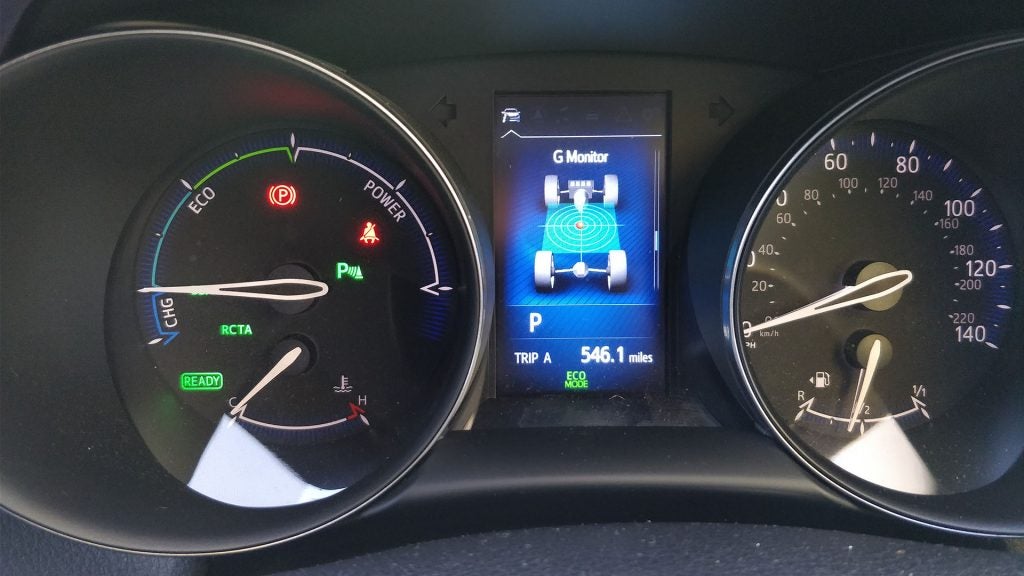 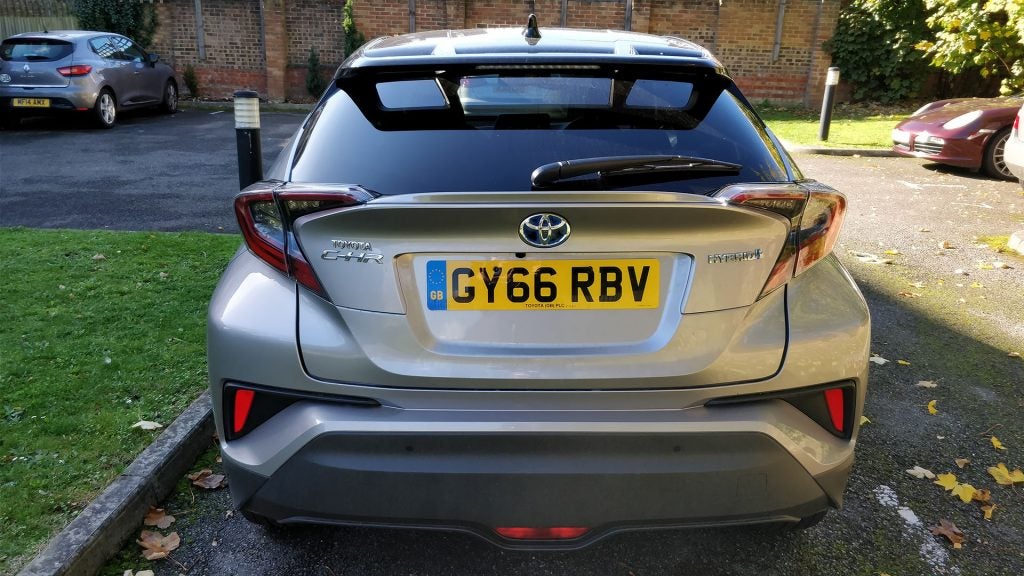 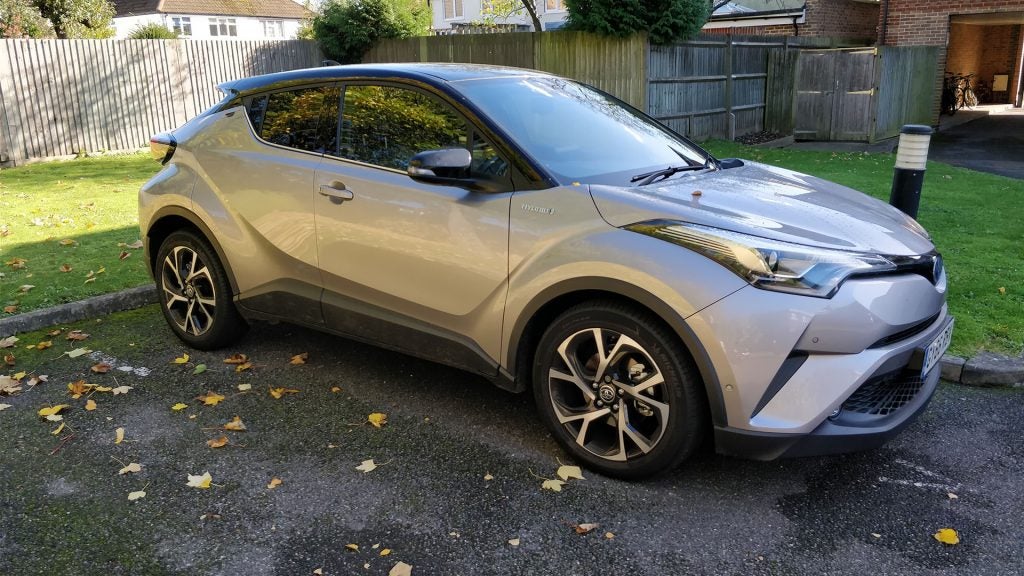 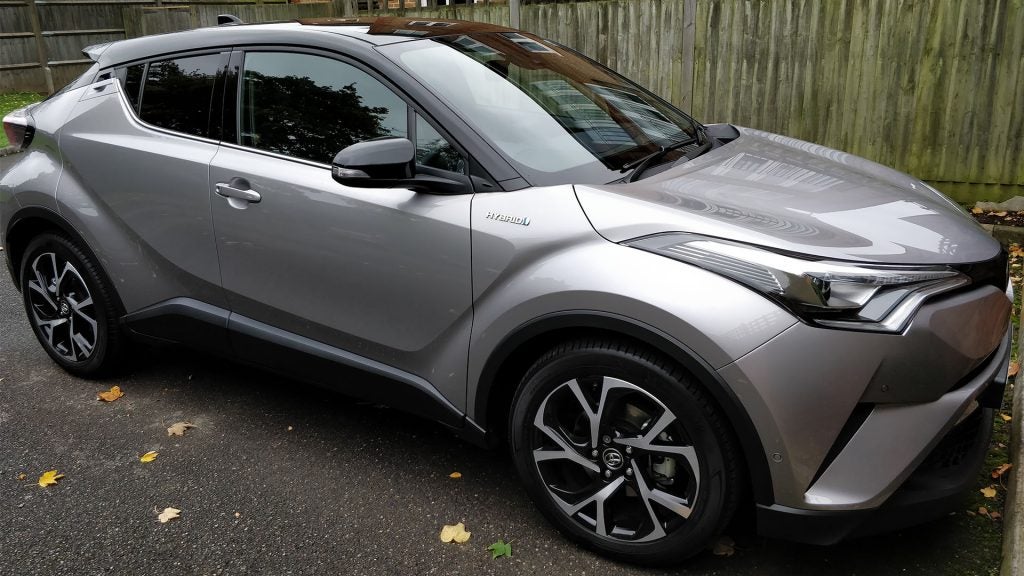 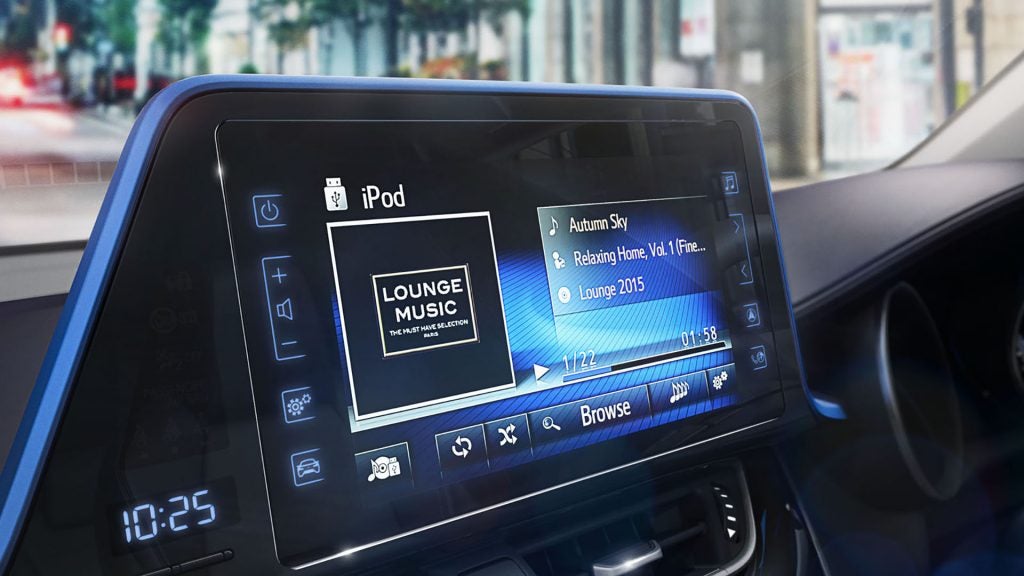 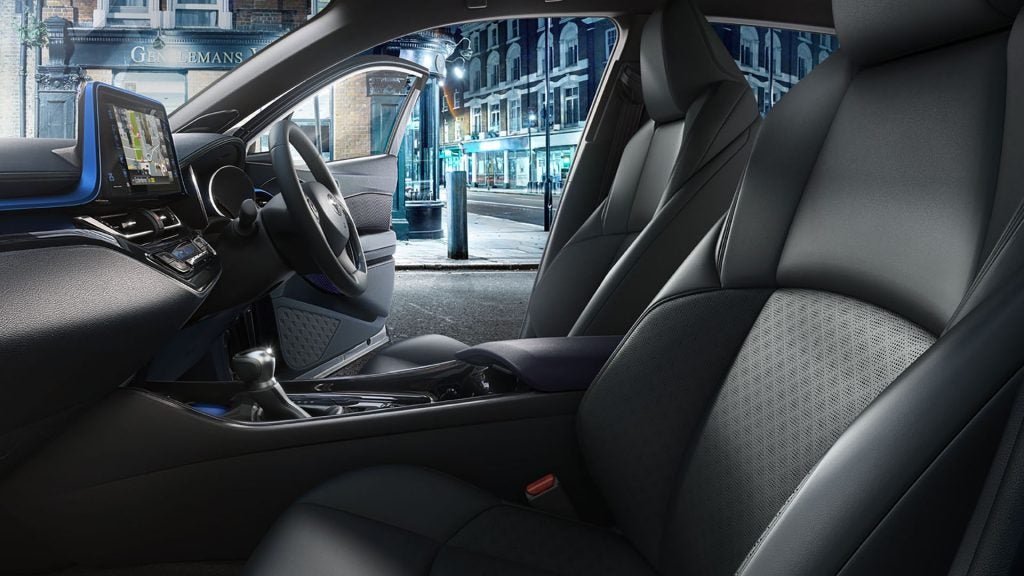 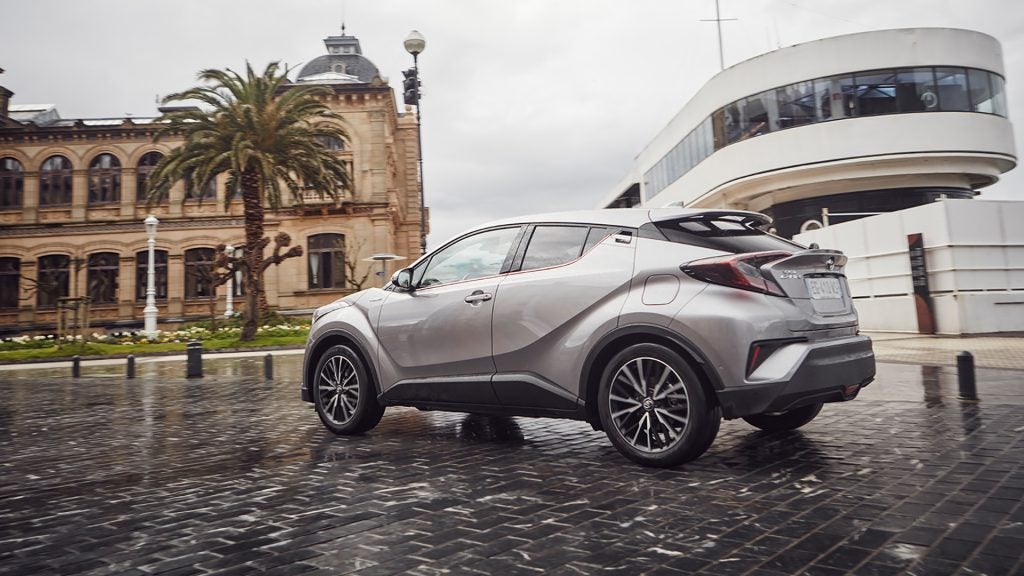 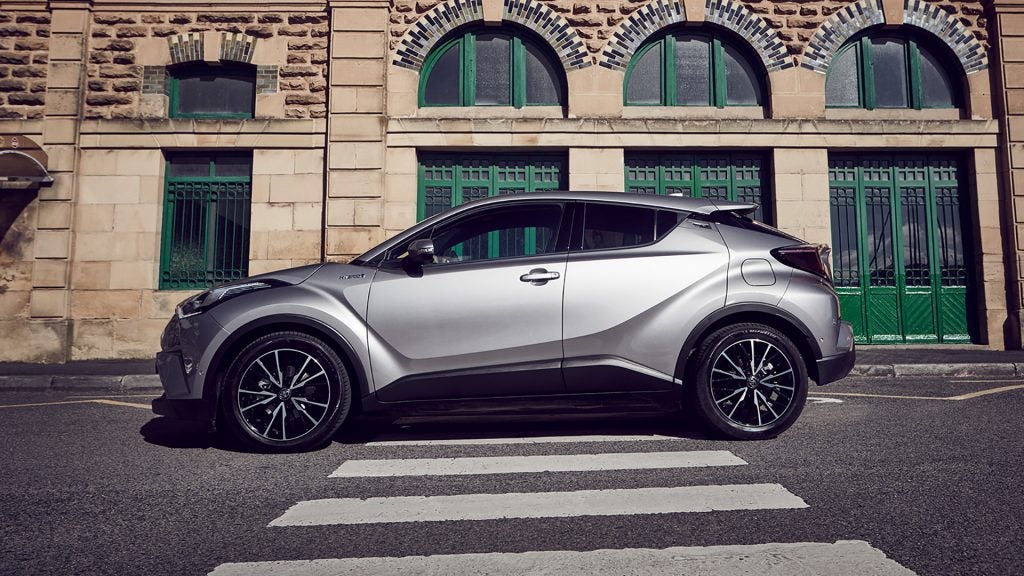 What do you think of the Toyota C-HR Hybrid? Let us know via Facebook or tweet us @TrustedReviews.