Total War: Three Kingdoms takes the series to China for the first time, offering both a Classic and Romance mode depending on whether you’re after a more authentic, historical experience, or a game in which your generals can quite happily stand their ground against a hundred swordsmen and not immediately get murdered.

We’ve gone hands-on with this more dramatised version of the game and have some thoughts to share, as well as a tonne of information about the campaign itself following a recent visit to developers, Creative Assembly.

Here’s everything we know about Total War: Three Kingdoms.

What do we think?

Okay, so, first things first: Three Kingdoms is all about the characters. They have an enormous impact on the battlefield in a way that even Total War: Warhammer’s legendary lords would struggle to match.

In the battle I played, one of my generals managed to actually oneshot an enemy character with an ability called Heart Seeker: a flaming arrow that could target a single unit at medium range. This action had a huge cooldown and sure, my character was of a much higher level, but I’ve never seen anything quite that drastic in a Total War game before. It was an instakill.

As the enemy general fell from their horse, his soldiers began to rout and the tide of battle was swung in the very same moment. Later on in that battle, as enemy reinforcements arrived, I once again sought out the opposition’s leaders. These characters were hardier than their predecessor and although I was able to soften them up with another dose of Heart Seeker, it was in single combat that they would eventually fall. Now when I say single combat, I mean exactly that. In Three Kingdoms, characters are able to challenge each other to a duel while the larger battle struggles on around them. The two heroes approach each other at speed and if there are any other soldiers nearby, a circle is formed, allowing these living legends to fight without interference.

It’s a real spectacle to watch, as characters are knocked from their horses, or pirouette to avoid an incoming swing. This right here, is the Romance of the Three Kingdoms in action.

Again, it was the deaths of these enemy generals that seemed to turn the wider conflict. Despite maintaining similar unit counts throughout most of the battle, the morale of the opposing force was quickly broken and they eventually fled before my troops.

I was reminded of playing Dynasty Warriors more than anything. It wasn’t just the shared setting, but the fact that the soldiers themselves felt like a secondary part of the battle. Everything had been determined by the actions of the generals themselves. They had won the day.

Three years ago, I think I would have hated that. But now, things feel a little different. I’ve spent so much time with Total War: Warhammer and its fantastical characters that this felt like a natural progression of what we’ve seen from those games.

I suppose that’s because, at least in Romance Mode, Three Kingdoms isn’t trying to be historically accurate. When it comes to the characters themselves, this is another fantasy game, albeit one that looks much more grounded in reality at first glance. Now I know a lot of historical Total War fans won’t like the sound of that and Creative Assembly was keen to point out that they’d find the game’s Classic Mode much more palatable.

“Quite quickly on, we got to a point where the designers realised we needed both a classic and fantasy mode,” explained communications manager, Al Bickham. “Adding bits of one to the other just felt like a constant compromise, so we went: okay, let’s be true to the historical epic and the history at the same time.”

We’re yet to play this other mode and so we don’t know how successful they’ll be in that regard, but from what I’ve played of the Romance Mode, I’m surprised by how much I enjoyed seeing Total War lean further into the realm of fantasy, rather than away from it.

What are the main differences between Romance and Classic mode during battle?

There are three major changes: fatigue, abilities and bodyguards.

In Romance Mode, your units will be able to do much more before they start to feel the effects of tiredness. This means you’ll need to worry less about walking your troops, rather than running, and a unit can remain in combat longer without suffering from reduced stats.

Your general’s abilities, like Heart Seeker, are meant to be significantly less powerful when used in a Classic Mode campaign and on top of that, your general will once again be accompanied by a unit of bodyguards, as we’re used to seeing in the other historical Total War games.

Duels work differently too. Whereas in Romance mode, it’s very much single combat, in Classic you’ll see both units of bodyguards clashing and then within that greater melee, the characters will come together and have their own fight.

How about on the campaign map itself?

Both the Classic and Romance campaigns will begin in 190 AD, as the coalition to defeat Dong Zhuo is beginning to fall apart. In either mode you’ll encounter a number of predefined historical events, but Romance Mode will also include a variety of events from the dramatised story that can also be triggered if the right criteria are met.

For example, in Romance Mode, Xiahou Dun can lose an eye to a stray arrow and spend the rest of the campaign leading troops while wearing an eyepatch, just as he did in the 14th century novel. But that doesn’t have to happen, it depends on the player’s actions. How many factions can we choose from when beginning a campaign?

Similarly to Total War: Warhammer, you’ll actually be selecting a character to play in the campaign, rather than a faction. There are eleven characters to choose between, including Cao Cao, Liu Bei and Sun Jian.

What happens if your character dies?

In Warhammer, if your legendary lord dies, you’ll need to recruit them again after several turns. This is not the case in Three Kingdoms. If you’re playing as Sun Jian, for example, and he is killed during a battle, he’s dead for good.

If you have an heir selected, your dynasty is passed on to that character and you’ll carry on the campaign with them. Although by default your heir is likely going to be one of your character’s children, you can select a different general if you’d prefer.

How does a character’s class change how they’re used in battle?

There are five different classes of characters in Three Kingdoms: the Vanguard, Sentinel, Strategist, Commander and Champion. Each of these classes offers a different kind of playstyle and will have access to a unique skill tree.

The Vanguard specialises in killing large number of enemy units, striking multiple opponents with each swing of their weapon and favouring Area of Effect abilities. Example character: Sun Ren.

The Sentinel is the Three Kingdoms equivalent of an evasion tank. They are the toughest characters to kill, with high amounts of health and abilities that reduce or avoid damage. Example character: Zhang Liao. 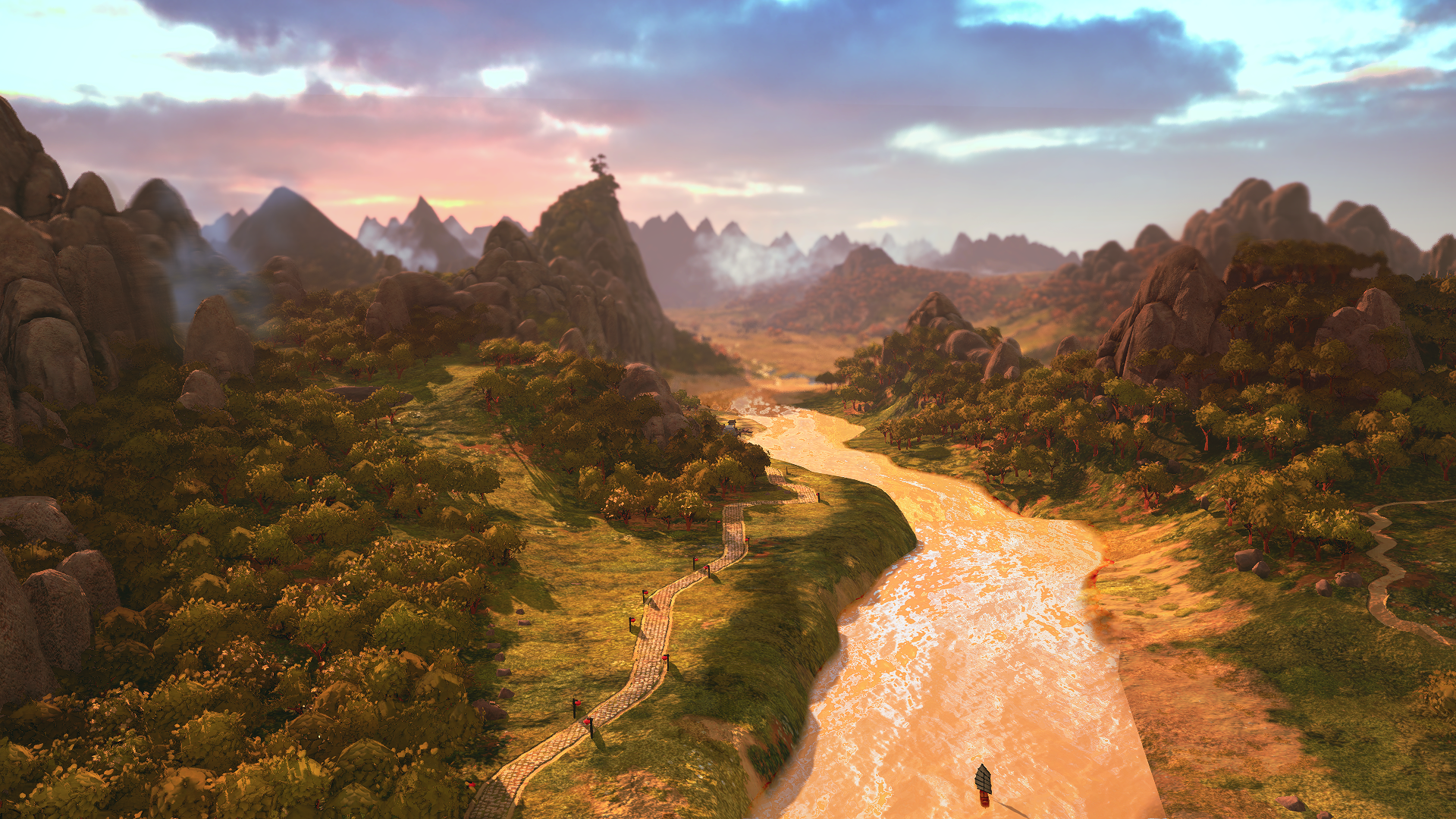 The Strategist is usually a highly-intelligent character that prefers to avoid direct combat. Simply by being in the field, they offer units extra formation types. If you’ve got some regular spearmen, they might be able to form a spear wall, but if there’s a strategist on your side, they could form a hollow square. Example character: Xun Yu.

The Commander is a more traditional general, more akin to those we’ve seen in past historical Total War games. They’re not bad in combat, but feel most comfortable behind the front line and providing buffs to nearby troops. Example character: Liu Bei.

Finally, the Champion is the single combat specialist. They can’t compete with a Vanguard or a Sentinel when it comes to dealing with multiple opponents, but they excel at dueling. Example character: Xiahou Dun.

What can I play it on?

Just Windows, it seems. It’s likely the game will be released on Steam.

When is the release date?

We still don’t have a concrete release date, but Creative Assembly is promising Spring 2019. It’s worth noting that the game was originally meant to be released in the second half of 2018, but was delayed to provide more time for development.