The country-wide lockdown means it’s difficult to schedule in your weekly visit to your elder relatives. And contact gets even harder if they’re tech adverse.

Luckily, there are a few simple gadgets that might be able to bridge the gap without costing you too much. Smart displays are a handy place to start, as they tend to be cheaper and relatively straightforward to use. But if you’re looking for something more comprehensive, you could try a tablet or a basic smartphone.

We’ve pulled together a few low-cost suggestions below, which could help you stay connected.

These gadgets sit somewhere between tablet and speaker. They tend to look a little like a digital alarm clock, but come with a lot more functionality.

The displays still require a certain amount of setting up and a Wi-Fi connection. It might be a good idea to familiarise yourself with the product before sending it to your older relative or make sure someone else is there to help them get started. 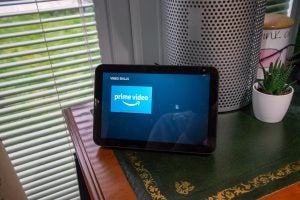 A display that’s not too big, and not too small, so it should fit snugly into anyone’s home. It can video call any other Amazon Echo device, but it can also reach a smartphone that has the Alexa app installed.

Like other Amazon Echo models, this smart display features a “drop in” feature. This means that as long you have the Alexa App on your smartphone, and the Echo owner has granted you permission, you can automatically dial into the Echo device and start a call, without the other user having to accept. This should mean that it’s relatively easy to call your relative, even if they’re not so sure about navigating the new device. 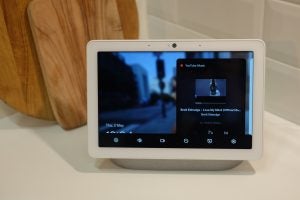 Unlike other Google Hubs, the Max comes with a handy front-facing camera for video calls. Unfortunately, it’s a little bit more expensive than the other models because of this.

As with the Amazon model, the Google Nest Hub Max will need to be set-up on a WiFi connection. Once on WiFi, the user can make video calls via Google Duo. This is handy, as it’s relatively straightforward (and free) for other users to set up a corresponding Google Duo account on their PC or install the phone app.

But Google Home Hubs can also be used to make normal calls. Again, the hub will need to have access to some contacts, but it needs little else in terms of set-up, and all calls to local mobiles or landline numbers are completely free.

While it doesn’t have the full drop-in feature offered by the Echo, it does allow authorised users to check in on the camera remotely. 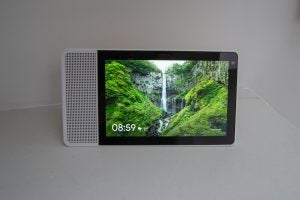 This model is a little pricier than Amazon’s Echo Show, but it does boast a larger 10-inch screen. It also takes advantage of Google’s free-calling system, so normal calls to landlines and local mobiles shouldn’t cost the user a penny. Video calls will need to be made via Google duo, so you’ll need to create a corresponding account to accept calls from your relative.

Unlike the above options, there’s no way to connect via video cam remotely, so you’re relative will have to accept your incoming call for you to chat and check-up on them.

Despite falling popularity in recent years, Tablets still provide a useful set of tools for anyone who doesn’t want to pay out for a full laptop but requires something a little bigger than a smartphone.

Like smart displays, they require a WiFi connection to function well, but the set-up process is arguably a little easier. 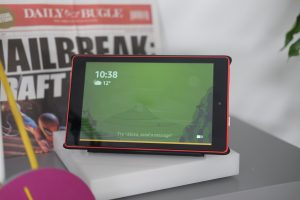 This is one of the best value tablets out there, retailing for around £79.99 or £109.99 with the charging dock. Alexa powers it, so if you want to make calls between devices, you’ll need to have the Alexa app installed.

Like Amazon’s smart displays, you can enable the drop-in call feature on this device. This means that you should be able to connect to your relative’s camera and start a video chat without them having to accept your call. 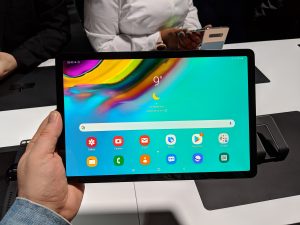 It’s a little pricier than Amazon’s budget series, and will probably set you back just under £400. But it might be a better option if you anticipate your relative using the device for watching shows and browsing the internet, thanks to its 10.5-inch OLED screen.

You can set up calls and texting on the device, but it’s a little finicky and requires the user to own a Samsung Galaxy phone.

Instead, it would probably be easier to download and set-up Google Duo on the tablet, which would then let you video call your relative from another Google Duo account.

This is arguably the trickiest option. Smaller screens and buttons might make it more difficult for people to navigate. And you’ll need to arrange a contract as well, for your relative to get full functionality.

On the other hand, phones are a more familiar gadget for anyone who’s tech-adverse, and you can get some very low-cost options that you might be able to try out. 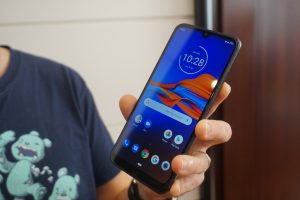 This is our favourite phone that will cost you £100 or less. It’s not big and flashy, but it has a good front-facing camera for video calls and a decent 6.1-inch screen.

There are of course a few drawbacks to a phone at this cost. Its speakers are loud enough, but the sound is quite tinny. It’s also quite slow to charge.

There is also no native video calling options on the phone, but you can quickly get around that by looking at third-party options, like Facebook Messenger or WhatsApp. 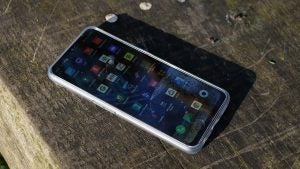 Another cheap option, this phone will probably only cost you around £160. It has a slightly larger screen than most budget phones at 6.5-inches, but the resolution is a little fuzzy. It also comes with a built-in video calling option, so your relative can hit dial then click on the video camera to ring you.

Unfortunately, it can be a little tricky to track down, although there are a handful of retailers still ranging the phone. 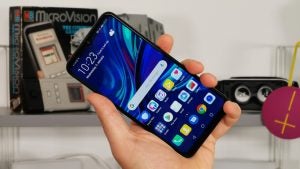 Like the Moto E6 Plus, there isn’t any inbuilt support for a video calling option, but there are lots of third-party apps that you can use to get around this. It’s also a little easier to track down than the Oppo A5.

The one downside to this phone is the slightly strange earpiece placement, which butts up against the very top of the handset. Although this doesn’t affect call clarity, incoming calls sound a little far away, as if they’re firing out the back of the phone.