It’s a bit of an understatement to say Titanfall is one of the most
highly anticipated games of 2014, but from what we’ve seen so far the
game justifies the hype.

In fact, we’ve been lucky enough to get our hands on the Titanfall beta, and were blown away by its innovations.

Read our first impressions of the game from the beta in our hands-on Titanfall review.

Titanfall comes to you from a new game developer called Respawn Studios. The developer was founded by Vince Zampella and Jason West, former co-founders of Infinity Ward of Call of Duty fame.

The game is a huge multiplayer-only FPS launching next year for the Xbox One, Xbox 360 and PC. You get to play as either a free-running pilot or dwell within the mech-style walkers known as titans.

Respawn has used all their COD experience to influence Titanfall, but it’s definitely a very unique beast. 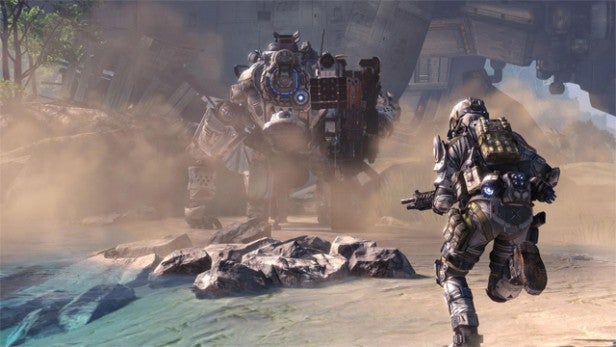 Titanfall Hands-on from the Xbox One beta

We literally cannot wait until the Titanfall release date next month, especially after playing the beta on Xbox One. You can read our hands-on Titanfall review for our first impressions on the game, but if two maps and three game modes are this good, we have extremely high hopes for the full game.

“Titanfall isn’t a radical reinvention of the online FPS, but it innovates and enhances where it counts.”

Titanfall Release Date: When is Titanfall coming out?

Respawn announced that Titanfall will touch down in March next year for the Xbox One, Xbox 360 and PC. The Titanfall UK release date is March 14, 2014. It will arrive in Europe on March 13 and on March 11 in the US.

“Since we revealed the game in June we’ve been absolutely blown away by the reaction to Titanfall,” said Vince Zampella of Respawn Studios. “The feedback we’re getting from fans around the world is fuelling our team as we head towards March and motivating us to deliver an experience that lives us to the hype.”

The game was originally scheduled to be an Xbox One launch title, but Respawn deliberately wanted to wait until the bugs and issues with Microsoft’s next-gen console had been ironed out.

“It’s tough to be one of the first ones out of the gate as you’re affected by any problems there might be on the Microsoft or the server end,” said Respawn Community Manager Abbie Heppe. “But anything like that will be fixed by the time we’re out.”

Unfortunately in February 2014, Respawn and EA Games announced that the Titanfall Xbox 360 release date had been delayed until March 28.

“The extra two weeks will ensure the full world of Xbox gamers have an awesome experience”, explained an EA Games spokesperson.

“In these last few weeks before launch, Respawn is in the final stages of polishing the Xbox One and PC versions of the game. Bluepoint is doing the same with the Xbox 360 version.”

You’ll still be able to pick up Titanfall for Xbox One and PC on March 13 in the UK, but 360 gamers will have to wait an additional fortnight in order to get in on the action. 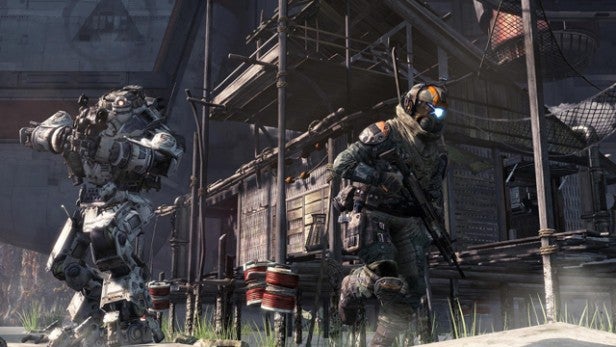 Titanfall News: What we know so far

The update was originally said to include many new features and improvements, but Microsoft has since clarified that the update will be focused on improvements to the Xbox One multiplayer and party experience.

“We’ve prided ourselves on having the best multiplayer service for Xbox 360 and we’ve listened to your feedback about the features you want to see on Xbox One and Xbox Live,” said Marc Whitten, Chief Product Officer at Xbox. “We’ve heard your feedback and the team has been working overtime to deliver updates that will significantly improve the multiplayer and party experience on Xbox One.”

Some of the new features include tweaks to the Friends app presentation, automatic party chat enabling and the ability to invite friends to the game you’re currently playing, just like you could on the Xbox 360.

Initially, Microsoft suggested the Titanfall preparation Xbox One update was scheduled to arrive on March 4, but the company has since changed this to a loose “early March” arrival. 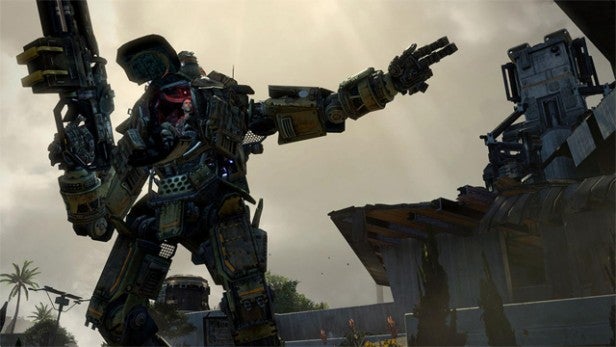 Beta access detailed for Xbox One and PC
You’ll be able to access the Titanfall beta on Xbox One and PC from Friday February 14. We suggest you register right now to guarantee yourself a Valentine’s Day treat.

All you need to do in order to register for the beta is head to the Titanfall website and confirm which platform you’d like to access the beta from. You will be required to sign up to the Titanfall newsletter though, but that’s not really a hardship for gamers eager to get their hands on some early access.

“Completing this registration does not guarantee access into the Titanfall Beta as seats are limited”, added a Respawn spokesperson.

“If you have been selected you will be emailed directly by EA with instructions on how to access the game no later than 11:59 PM PST on Feb 17th. Origin Account required for PC Beta.”

“In the case of Titanfall, it’s a brand new IP, and it’s exclusive only, for the life of title, on Xbox One and Xbox 360 and PCs,” said Jorgensen.

That means Titanfall will not come to the PS4 or PS3 ever, something that Respawn founder Vince Zampella was a little disappointed about.

“Always MS Exlcusve at launch, great partner and focus is good for a start-up. EA made a deal for the rest, we only found out recently =(,” tweeted Zampella afterwards. 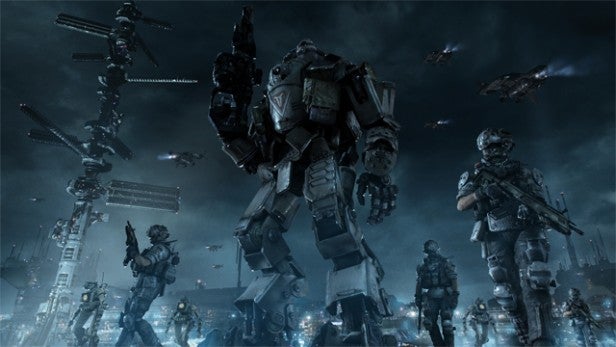 There’s no single-player campaign to speak of with Titanfall, but there has been some information about the game’s storyline from Respawn.

Titanfall is set in the near future and you’re dropped into the middle of a war between the Militia and the Interstellar Manufacturing Corporation or IMC.

The IMC started out as Hammond Engineering, but increasing demand for Titan materials and the company’s planet surveying tech and map database rights led to the company’s exponential growth.

The Frontier Militia is the total opposite of the IMC in that it is made up of homesteaders, bandits, mercenaries and pirates all coming together as ‘citizen soldiers.’ 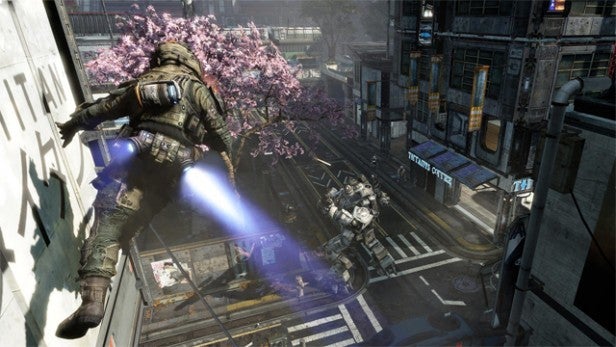 Respawn describes the Titanfall gameplay as “rapid and varied.” You’ll need to switch between playing as a free-running pilot and the titans in order to overcome the enemy.

The titans are highly evolved military exoskeletons, while the pilots can free-run, perform massive double jumps and hijack the titans.

There are different classes of both titans and pilots, and Respawn says “a fully combat certified Titan pilot is a rare find”, because of the “extreme physical and mental challenges of mastering both Titan combat and dismounted parkour movement.”

So far, Respawn has teased us with two different Titan classes. The two Titanfall Titan classes known as Ogre and Stryder were revealed in two separate trailer at Spike’s VGX event in early December 2013.

Both Titan classes were unveiled as part of a Hammond Robotics announcement. This is the first time Respawn gave any story element teasers for Titanfall, and it seems Hammond Robotics are responsible for the production of all the weaponry in Titanfall and the Titans themselves.

The Stryder is a fast-moving Titan shell that is “23 per cent lighter” than other Titans and an “advanced gyroscopic balancing system.”

Basically, it “outperforms all other Titans at speed, acceleration and agility”, but obviously won’t be able to withstand as much damage as other models.

The Ogre on the other hand is the heavy-handed option. Its designed for impact by weight and strength and is much slower and more lumbering than the Ogre.

“In field testing our newest model uses its heavy armour design to destroy the competition in ballistic and martial testing.”

In the Titanfall trailer below for the Ogre, you can see the Ogre rip off another Titan’s arm and use it as a melee weapon, which is evidently one of its finishing moves.

Respawn has officially announced the Titanfall minimum PC system requirements, even if it was on Twitter.

Vince Zampella, co-founder of Respawn Entertainment, confirmed that Titanfall will need at least a 64-bit version of Windows to run.

Respawn has yet to announced the recommended Titanfall PC specs, but we’ll keep you posted if there’s any update.

Read more: Best Xbox One games in 2013 and beyond