AMD’s officially announced Threadripper 2 CPUs, some of which are available to pre-order today. Confirmed specs and prices reveal that Threadripper 2s will cost significantly less than the competing Intel Core i9 chips.

The CPUs are split into 2 families: X for enthusiast and WX for professionals. Specifically, you’ll be able to pick between 2990WX, 2970WX, 2950X and 2920X Threadripper 2 options.

Here’s everything you need to know about the new Threadripper 2 CPUs.

The top specced 2990WX Threadripper has an insane 32 cores and 64 threads and will be complete overkill for semi-professional users and gamers. The CPU is targeted at professionals and academics that regularly do high-end computational work like AAA cinema rendering, data science and machine learning rendering.

At the bottom end, the Threadripper 2920X features 12 cores and 24 threads and should be good enough for most regular creative workloads.

All the new Threadripper CPUs use the same upgraded Zen+ architecture seen on AMD’s regular Ryzen 2 CPUs, like the Ryzen 7 2700X. 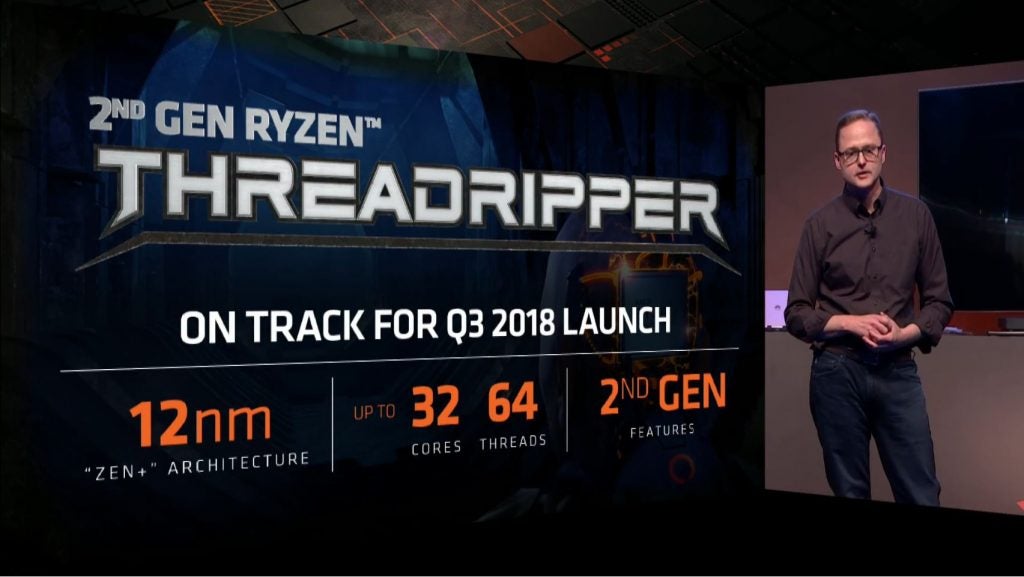 Zen+ is an upgraded 12nm nanometre (nm) FinFET manufacturing process that’s a step up on the previous gen’s 14nm process. It offers a variety of improvements on last year’s chips. These includes improved power infrastructure for higher clock speeds across the board.

Sadly, despite the improvements the i9 still wins out on is clock speed. The Intel i9-8950HK’s 2.90 GHz base and 4.80 GHz Max Turbo Frequency clock speeds remain higher than the top end Threadripper 2920X, which offers 3.0 GHz and 4.2 GHz base/boost speeds.

However, the improved architecture and core count mean the new Threadripper CPUs should still be significantly faster running creative workloads, like rendering graphics in Blender, than Intel’s top Core i9 CPU.

You can see a full specs break down of the new Threadripper CPUs in the table below.

Existing motherboards are being updated to take advantage of the new WX series of Threadripper 2 CPUs.

Asus has come out of the gates saying that you’ll be able to download BIOS drivers for motherboards from the X399 Series today. Asus Motherboards that are confirmed to be getting Threadripper 2 updates are:

Additionally, Asus says that cooling kits designed to handle the increased thermal output you’ll generate when overclocking Threadripper 2s will be available from September, but we’ve no further details on these yet.

Excited about AMD’s new powerhouse Threadripper 2 CPUs, or are you going to wait and see what Intel has in store for us this year? Let us know on Twitter @TrustedReviews.