The OnePlus 7T only hit the shelves last month but, it seems we might already have had an eyeful of the OnePlus 8. A handset suspected of being a OnePlus 8 test model has been spotted in the wild.

It will be at least another six months until we see the OnePlus 8 properly, according the the company’s release schedule, but pictures of a handset that appears to be the OnePlus 8 are currently doing the rounds online.

An extra camera sensor on the back of the phone clearly shows us that this isn’t the OnePlus 7 or OnePlus 7 Pro. A punch-hole seemingly contains two cameras on the front too, so there’s more photographic firepower all round on this mysterious new handset.

A previous leak, from October, showed a similar handset claimed to be the OnePlus 8 Pro. It also featured a punch-hole camera, though only one, and three cameras on the reverse. This render, by 91 mobiles, shows something similar to the one snapped over the weekend. 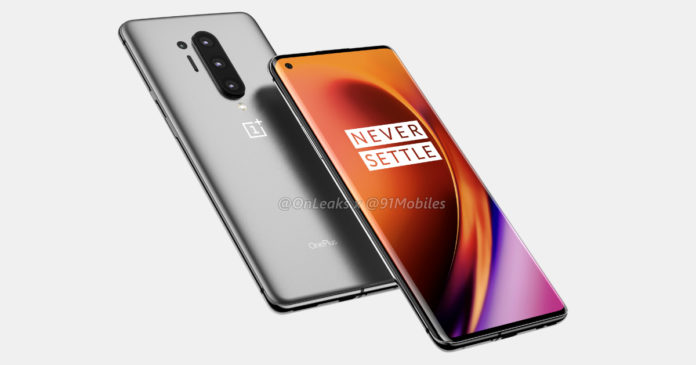 The similarities between the render above (of the Pro) and the image captured in the wild (probably of the standard version) reinforce each other to some extent. However, it would make sense to expect the double front camera on both new models.

When we reviewed the OnePlus 7 we were impressed with the performance and battery life, but didn’t see the hugest leap forward from the previous model. Alex Walker-Todd wrote in his review: “This is a steady, slightly predictable update to the OnePlus 6T that is clearly trying to entice those who haven’t updated in a few years. If you’re coming from a OnePlus 3T or even a 5 or 5T, then the difference should feel significant.

“If you’re going to be upgrading from the OnePlus 6 or OnePlus 6T the updates are less immediately obvious. The camera will be better and the performance should be too, whether the improvements will warrant an upgrade remains to be seen though. That aside, however you look at it, this is a great value phone that’s a strong competitor to the excellent Xiaomi Mi 9.”

This begs the question: Will the OnePlus 8 make a bigger leap forward? There’s no knowing at this stage but we can see an increase in camera provision and a typically sleek design. watch this space.