We heard a number of bold claims at CES but none quite as surprising as the idea that singing while driving could make you a safer driver.

That’s right. According to some researchers, belting out a tune behind the wheel could actually help you to concentrate and adhere to the rules of the road.

Enter: Roxie, a mobile karaoke machine for your car created and developed by Taiwan-based company Carkit AI, described on its website as “literally Car Pool Karaoke in a box”.

Roxie pairs with iPhone and Android devices via Bluetooth, offering its users access to a number major music apps from Spotify to Apple Music to YouTube. 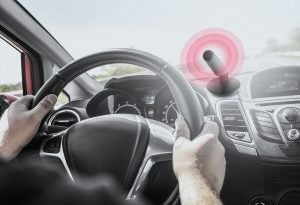 The karaoke machine’s processor also includes built-in vocal effects and a mixer, allowing users to use 3D surround sound to emulate a concert hall or cathedral and to shift the pitch of a track to fit their own vocal range.

The hands-free mic sticks to the dashboard of the car, acting as a safety feature as much as it does a thing of convenience. The mic’s range is able to extend all the way to the rear seat, capturing the vocals of everyone in the car and and reducing feedback from car speakers. The hands-free design also ensures the driver’s hands aren’t occupied with holding a mic, potentially reducing the risk of distractions on the road. 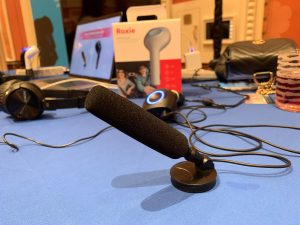 Trusted Reviews was given the opportunity to talk to Carkit AI CEO Jeffrey Wu at CES. Wu claimed that singing while driving actually leads to an increase in safety as it boosts concentration and focus.

When we followed up for more information, Wu directed us to this 23 second clip from a conversation between Lex Fridman and Tesla CEO Elon Musk on YouTube. In the clip, Fridman and Musk briefly discuss the connection between fun and safety in regard to Tesla’s built-in karaoke software – Caraoke.

“Singing in a car’s really good for attention management and vigilance management”, says Fridman in the podcast.

While this video doesn’t really prove that karaoke improves driver concentration, studies have taken place in the past that get a little closer to explaining the theory.

In 2005, Dr Nicola Dibben researched the effect of music on the road on behalf of Privilege Insurance. Dr Dibben found that music is more effective than silence, conversation or talk radio in achieving an optimal state of alertness.

“Singing while driving stimulates not only the mind but also the body which in turn produces heightened alertness and reduced fatigue”, said Dr Dibben. “Singing may be less distracting than conversation because drivers recall words to songs they already know, or because it is fairly easy to learn the words to music where it uses repeated lyric”.

That said, there’s plenty of evidence that points in the opposite direction, too.

Just last month, UK car hire firm Select Car Leasing reminded drivers that they could be slapped with a £5,000 fine for singing along on the road.

“Listening to music in your car is one thing, but if you’re singing loudly, dancing in your seat and generally getting into the groove, then you’re at risk of being distracted from the job at hand – which is keeping your eyes on the road”, said director Mark Tongue. “If there’s evidence – either dashcam footage or testimony from a police officer – that you were dancing and singing prior to an accident, you could ultimately be prosecuted for dangerous driving or driving without due care and attention”.