Around the world, measures are finally being taken to ease safety regulations in the face of Covid-19. With the likes of cafes and cinemas being key parts of the reopening of society, gyms have largely been absent from the public discourse – but not if Myzone has anything to say to about it.

Fitness fanatics might already be aware of Myzone’s performance tracking products, but now the company has launched an entire platform for hosting fitness classes, in partnership with Zoom, which can be streamed directly into your home: MZ-Remote.

On the surface, the idea of having classes beamed into your living room could be mistaken as the death knell for gyms all over. After all, with people eager to stay fit yet still unsure about how to reintegrate with the rest of society, being able to get your daily workout done from the comfort of your own home seems like the perfect solution. As it turns out, however, Myzone’s ambitions are quite the opposite.

Aiming to work directly with gyms and personal trainers on a global scale, MZ-Remote will allow institutions to reconnect with their members by offering them a suitable alternative. For example, to maintain social distancing rules, gyms will likely have put a cap on the number of people who can physically attend a class. However, if the same class is streaming via the MZ-Remote, then you could potentially have dozens of members attending the class virtually, without any risk of contamination. 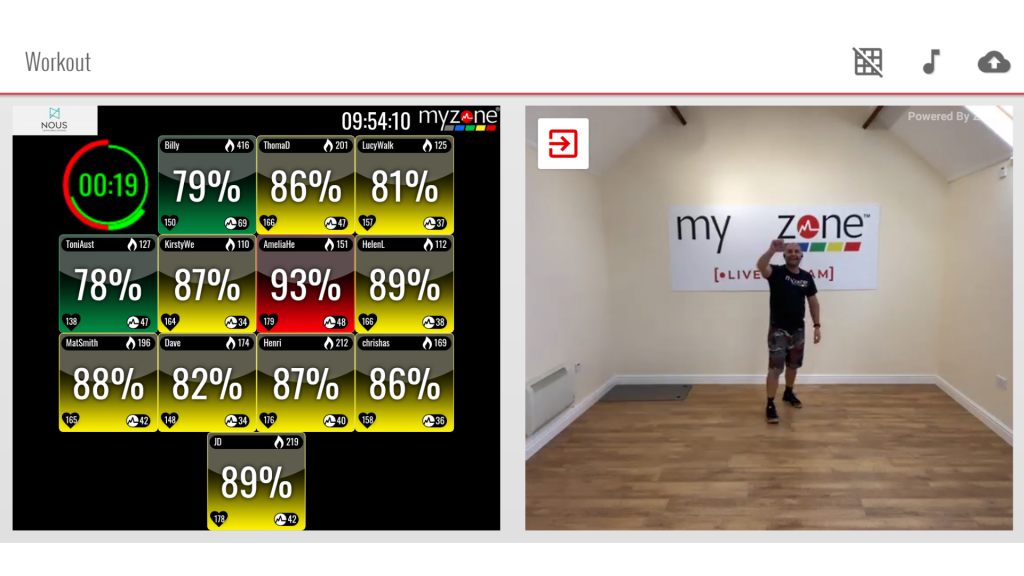 The performance metrics of you and your fellow classmates can be displayed alongside the live stream.

Ahead of the service’s official launch, however, a few other industry journalists and I attended a quick workout hosted via the Myzone app. As the pictures included within this article can attest, the app certainly served its purpose in that I was a sweaty mess by the end of the session. To get things started, all you have to do is book your spot, put on your Myzone band to keep track of your performance and then you’re away. If you’ve got a Chromecast lying around or an AirPlay-compatible TV, then it’s worth beaming the session to a larger screen.

The broadcast is split between two tiles: on the one hand, you have the livestream itself, but on the other, you have not only your performance but also the performance of everyone else taking part in the class. If you’re not the competitive type, you can swap the latter tile to only show your performance.

If you’ve already used a Myzone device, you’ll know that its tracking features are a little different from the likes of Garmin and Fitbit. While your heart rate is tracked at all times, the key measurement you want to watch out for is your performance level, rated on a 0-100% scale. There are five colour-coded brackets within that scale, making it a tad easier to know if you’re currently over-performing on an exercise and need to bring it down, or if you need to pick up the pace. 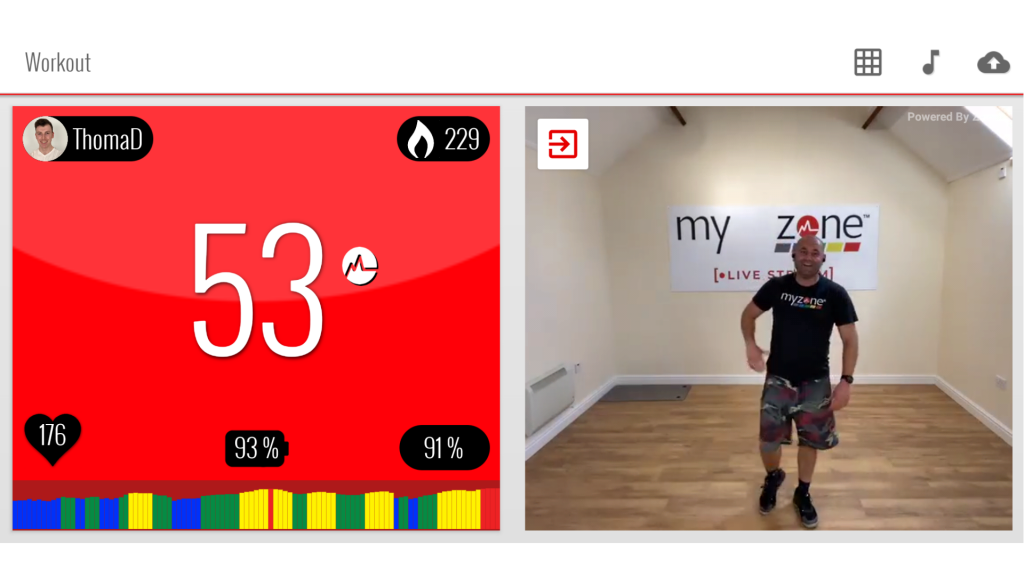 If you’re not in the mood for competition, you can swap out the left tile to focus entirely on your performance.

It’s an intriguing system, one that I believe helps to simplify the whole process and allow you to be more in tune with the different levels of strain you can put your body under during a workout. Whether or not it gets used to full effect depends on a case by case basis, and the instructor’s willingness to adopt the system into their style of teaching.

In the UK, there are currently 12 gym operators signed up to work with MZ-Remote, including Third Space and David Lloyd – two of the biggest names in UK fitness. However, the service’s biggest task will be to sway previous gym-goers who, after being forced to adapt under lockdown, have become self-sufficient with utilising the plethora of free content that’s currently available on YouTube. You only have to look at the popularity of the nation’s favourite PE teacher, Joe Wicks, to get an idea of how large that group actually is.

For those who are far more motivated by the class system however and the simplicity of being told which exercises to perform, MZ-remote will no doubt strike a chord. Given that the jury’s still out on how the governments around the world will handle the reopening of gyms in a post-pandemic society, MZ-remote might be the beacon of light fitness fanatics have been hoping for.

MZ-Remote is now available via the Myzone app.