Excited for The Walking Dead season 8? We’ve got all the news, including the TWD season 8 release date, trailers and more.

The Walking Dead is one of AMC’s biggest hits. The zombie thriller takes place in a post-apocalyptic world in which the undead roam the Earth looking for flesh to gnaw on.

Like all good zombie shows, there’s plenty of blood and gore to feast your eyes on. And it looks like the eighth season has more than ever in store…

You can watch The Walking Dead on AMC, available on BT channel 332 and Sky channel 192. 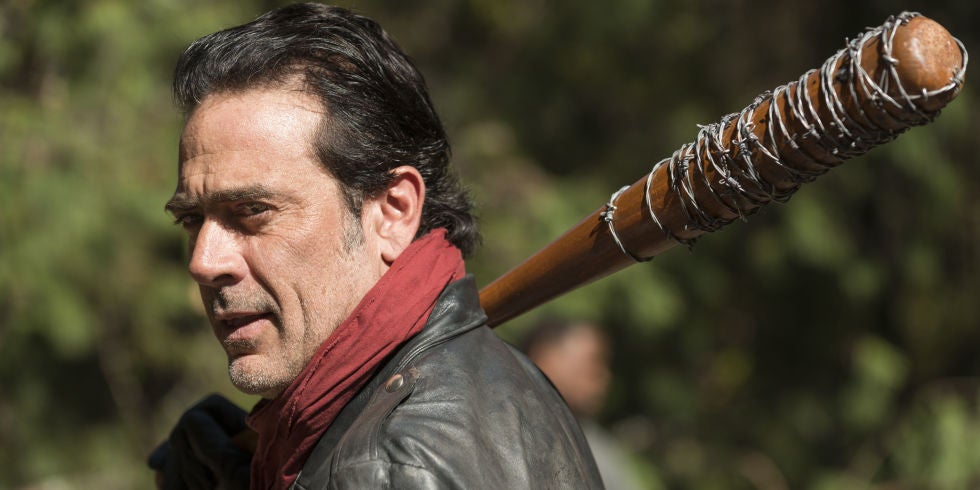 The Walking Dead Season 8 Release Date: When does series 8 air?

The next series will debut on 22nd October in the US, and will air in the UK on Fox the following day. Like series seven, it will comprise 16 episodes.

The season premiere will be a biggie – it’s the show’s 100th episode, so expect it to pull out all the flesh-eating stops. The promo poster for the eighth series shows Rick Grimes (Andrew Lincoln) staring down the villain Negan (Jeffrey Dean Morgan).

Considering the last series culminated in a war being declared between the rival communities, there really is no love lost between the pair. 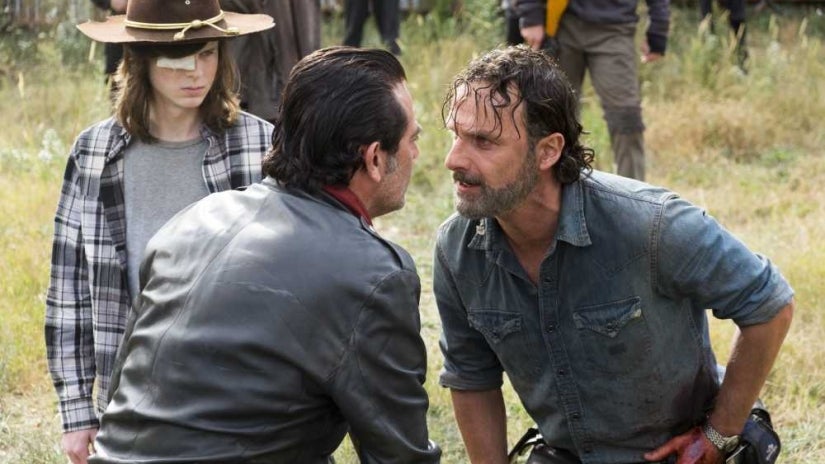 AMC has released a few trailers and promos for The Walking Dead season eight.

Back at the end of May, it dropped the first trailer. As you can see, it involves all manner of crazy goings-in, including tigers, helicopter crashes, and of course zombies. We also see Grimes being pushed from a great height.

The middle of June saw the first promo drop. This gave a much better idea of what to expect from series eight, and was much longer than the previous spots.

There’s plenty of blood and gore, as we see Grimes lying on the floor shooting zombies in the head, along with heads being clubbed and knives slashing stomachs making zombie guts spill out. All the stuff fans love.

In terms of plot, it doesn’t give much away, bar the fact that a showdown between Negan and Grimes is on the cards. But it’s a hell of a montage of bloody violence, punctuated only by religious mutterings like “Whoever sits in the refuge of the most high should dwell in the shade of the Almighty” (which paraphrases Psalm 91:1). In other words, standard trailer fare for this kind of show.

Come July, we had an intro clip to get our blood-spattered teeth into. This starts on an abandoned bus, but soon we learn that it’s not as empty as we thought, as an arm claws its way over one of the seat backs. We then see shots of the setting as the credits roll, and it’s as deserted as a provincial high street on a Sunday morning. Where is everybody? Eaten by zombies, no doubt.

The end of August saw the longest clip to date. The nearly five-minute spot focuses on characters including Rick Grimes and Sergeant Abraham Ford as they battle zombies, mostly in slow motion, and set to a plaintive score.

Then it all. Kicks. Off. That tiger is back again, pouncing on someone before gnawing on his neck in glorious close-up. Then there’s a gunfight that lasts for some minutes. There’s a reason the video is called ‘Warrior Clip’, we suppose.

The clip is dedicated to Glenn Rhee, a pizza delivery boy who was separated from his family during the zombie apocalypse and who subsequently joined Grimes’ gang of survivors. Rhee was brutally murdered in series seven.

So what will happen in series eight? Helpfully, AMC has released a plot synopsis – look away now if you don’t want to know what happens.

“Last season, Rick Grimes and his group of survivors were confronted with their deadliest challenge yet. With the comfort of Alexandria, they let their guard down, only to be reminded how brutal the world they live in can be.

“Feeling powerless under Negan’s rules and demands, Rick advocated the group play along. But seeing that Negan couldn’t be reasoned with, Rick began rallying together other communities affected by the Saviors. And with the support of the Hilltop and Kingdom, they finally have enough fire power to contest the Saviors.

“This season, Rick brings “All Out War” to Negan and his forces. The Saviors are larger, better-equipped, and ruthless — but Rick and the unified communities are fighting for the promise of a brighter future. The battle lines are drawn as they launch into a kinetic, action-packed offensive.

“Up until now, survival has been the focus of Rick and our group, but it’s not enough. They have to fight to take back their freedom so that they can live. So that they can rebuild. As with any battle, there will be losses. Casualties. But with Rick leading the Alexandrian forces, Maggie leading the Hilltop, and King Ezekiel leading the Kingdom — Negan and the Saviors’ grip on this world may finally be coming to an end.”

There will also be plenty of killing. And we mean a lot of killing. Steven Ogg (who plays Simon) previously told ComicBook.com that series eight will “thin the herd” by killing off some major characters. Which perhaps isn’t surprising, seeing as the show follows the source comic’s story arc called “All Out War”.

Asked if this war will involve people dying, Ogg replied: “Yeah, I mean shit, it’s like whenever people say, ‘Are you going to die? Or do you know yet?’ Yeah, everyone’s going to die at some point, right? They all die. 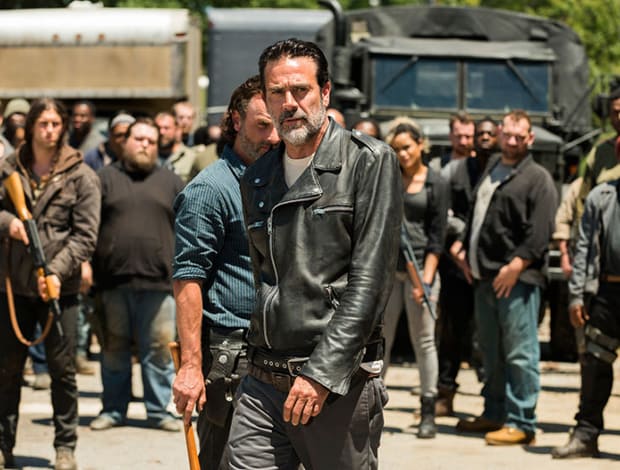 According to Tom Payne, who plays Jesus (not that one), the series starts in a big way.

“Season eight certainly starts with a big bang and then continues to ramp up, which is really exciting,” he told IGN.

He suggested that each episode would shock the fans. “I know the audience will be really happy with certainly how it starts, because they are taking the fight back, and then every single episode in the first half there’s a moment which makes you go, ‘Wow, oh my god, I can’t believe that.’”

And there will be plenty of action. “There’s just an insane amount of action, and different dilemmas. There are characters who are involved in war, so what is the right thing to do during war? Is it just kill everyone? In every war, there are casualties who maybe shouldn’t have been.

“There are dilemmas that I hope the audience is involved in as well in watching it, and there are choices to be made of how to move forward at certain stages,” he added.

Chandler Riggs, who plays Rick’s son Carl Grimes, confirmed what the others have said.

“Season seven was all about building up and getting everyone ready to fight against Negan, and this season, there’s going to be lots of explosions, lots of killing, a lot more Negan,” he told Triple J.

Star Andrew Lincoln is also stoked to be back. “I’m more excited for season eight than I’ve ever been,” he told the Los Angeles Times. “I think it’s going to be big, but it’s also going to be terrifying. And I mean that from the very depths of my cynical soul.” 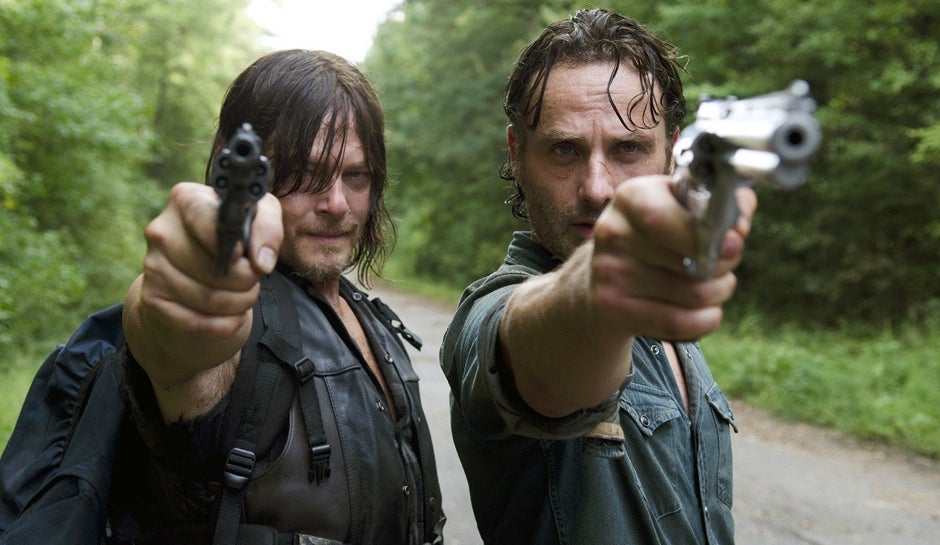 The Walking Dead Season 8 Cast: Who stars in TWD series 8?

Series eight will see some new faces join the fray, as two new male characters join the Alexandrian side. The first is Dillon, a “sexy, blue-collar twenty-something whose survival skills include sarcasm”. And the other is Abbud, an “innately likeable Muslim American whose nerves are jangled, because he’s flown solo for too long in zombieland.”

Having seen what’s in store for series eight, we can’t say we blame him. 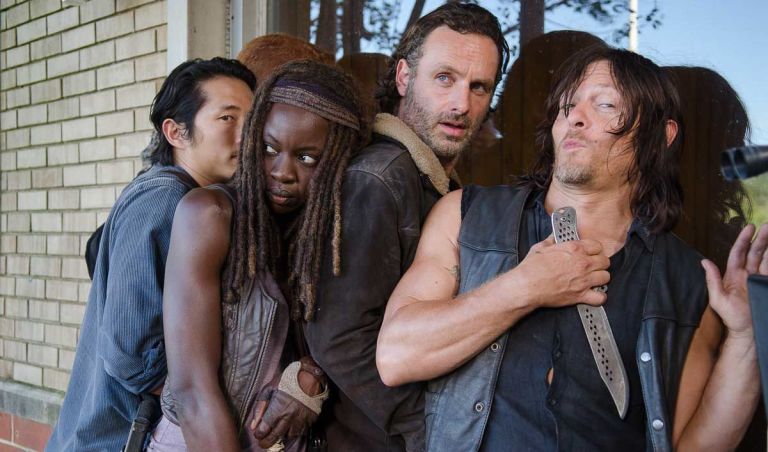