The Legend of Zelda: Link’s Awakening is being remade for Nintendo Switch, bringing the 1993 Game Boy classic back into the limelight with the power of modern hardware.

Coming to Nintendo Switch this September, it’s shaping up to be a wonderfully charming modern remake of the original classic, and a recent trailer at E3 2019 went into further details about what we can expect from the upcoming exclusive.

You can watch the brand-new gameplay demo from E3 2019 below which shines a brighter light on Link’s Awakening’s world, characters and changes when compared to the original. It looks positively gorgeous, and we simply can’t wait to play it later this year. Enjoy it yourself below!

The Legend of Zelda: Link’s Awakening is coming exclusively to Nintendo Switch on September 20, 2019. That’s right near our games writer’s birthday, so she’ll be thrilled!

Link’s Awakening was before my time, gracing the original Game Boy in 1993, not only before I started playing games, but before I was born. So, this luscious reimagining on Nintendo Switch is a welcome sight, providing this oddball classic another chance to shine for an entirely new audience.

Simply describing it as a visual makeover and calling it a day would be a massive disservice, though. Link’s Awakening boasts such a striking personality that it feels like a completely distinct experience, bringing with it an aesthetic like nothing else in the series, or otherwise. Seriously – it’s like a Sylvanian Families playset come to life.

Having played it, this upcoming adventure is a classic Zelda outing in the purest sense as you venture across a colossal world tackling dungeons and collecting equipment that will prove essential to your journey. I only caught a small glimpse during my recent hands-on, but Link’s Awakening has fallen straight onto my most anticipated games of 2019. 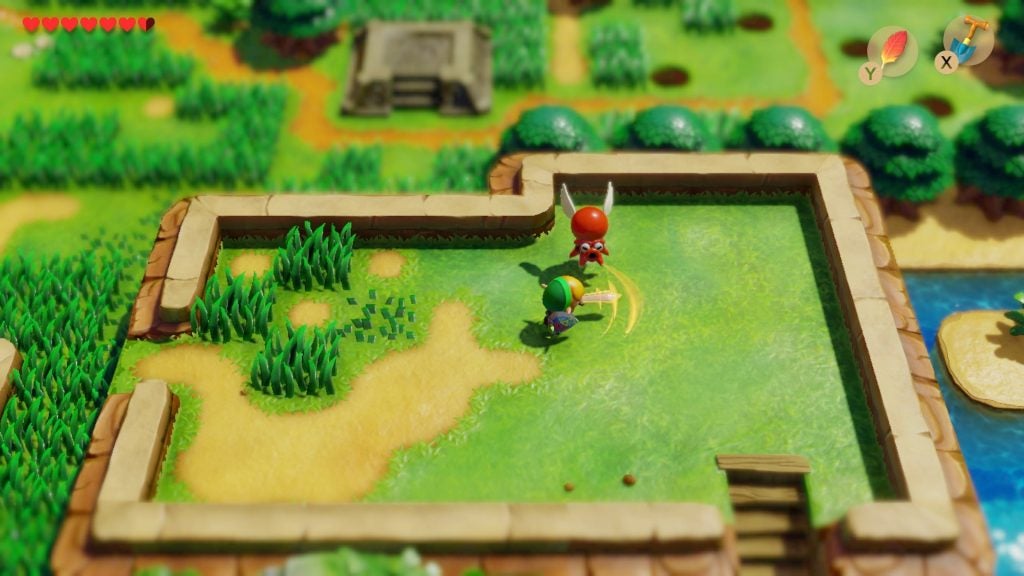 Link’s Awakening begins with our hero washing up on the shore of Koholint Island. Before he’s eaten alive by a mixture of crabs, goblins and goodness knows what else, the Hero of Time is rescued by the friendly locals. After waking from my slumber and chatting with a cutesy girl, who looks a lot like a certain princess, I was thrust onto the island to do whatever I like.

The demo was capped at 15 minutes, so I decided to immediately head towards the first dungeon. Unfortunately, it’s a little more complicated than walking through the front door. First, I waltzed down to the beach I washed upon to find my sword. There’s no master variant here, just a generic blade, but it gets the job done. Once in my hand, I headed to the Forbidden Forest to start murdering the local wildlife.

I was told I’ll need to find a poisonous mushroom for the local witch to turn into a powder which, if used correctly, will annoy a certain creature and grant me passage to the nearby dungeon. It’s a simple puzzle, yet was made hugely enjoyable as I uncovered the dynamic environment.

Blue pig creatures poked at me with spears and arrows as I cut through nearby bushes in search of the elusive mushroom, finding a handful of rupees and other goodies for my troubles. After walking through a hollow log I arrived in a cave with creaking floors and bushy bats which I swatted away before coming out of the other side. 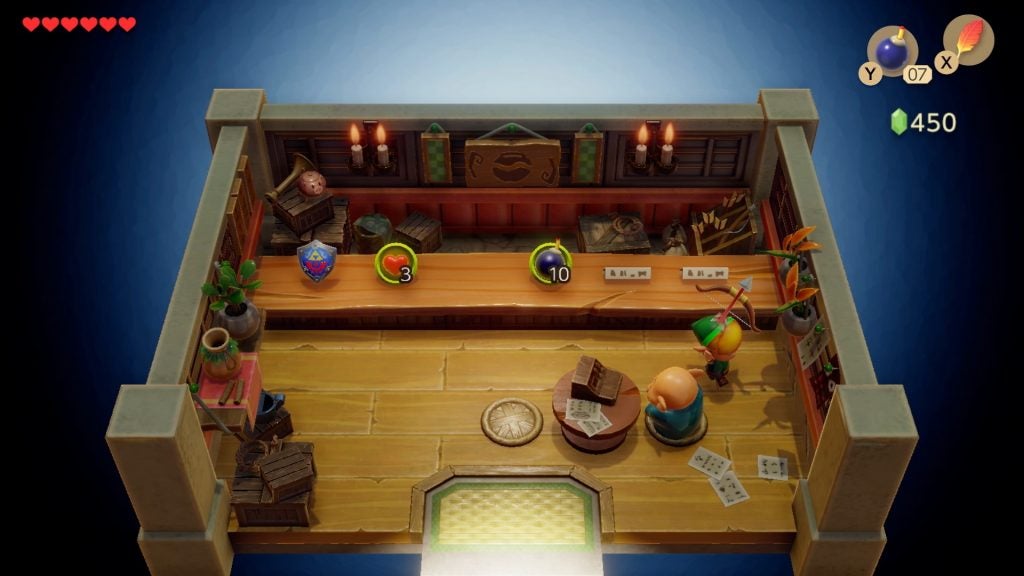 Every screen of Link’s Awakening feels lovingly crafted, like a child’s playset filled with bespoke components that help it all come to life. It’s like a diorama you’d display in your living room. An aggressive depth of field effect borders the screen as you move, presumably combating performance issues. Even with a practical use, it only enhances the visual splendour, drawing my eyes to specific buildings and characters as they come into view.

The saturated colours of the starting village juxtaposed with the dark, foreboding tones of the forest work wonderfully, teasing a world I’m positive will be drenched in atmosphere. Link’s like a figurine in this world, his black eyes filled with curiosity just like mine, as I discovered a classic for the first time from a new perspective. If you can’t tell, I’m rather smitten already.

Once I found the aforementioned mushroom, I took it to the local witch who hurled it into her cauldron before handing me a small bag filled with powder. After hurling it at a humanoid raccoon I finally gained access to the dungeon. Sadly, before I could move any further, the 15-minute timer came to an end. It was a bitter climax, as I’m desperate to see what else awaits me in Link’s Awakening.

The Legend of Zelda: Link’s Awakening is a magical reimagining of a beloved classic. Such a statement brings with it some huge expectations, and I’m fairly confident that Nintendo is well on its way to meeting them with this.

Exploring Koholint Island is a treat in itself, as you converse with quirky characters and find secrets hidden in and outside of dungeons. It’s been revamped for a new generation while maintaining the oddball charm that makes the original so fondly remembered.

Are you excited to see the return of this classic on Nintendo Switch? Let us know on Facebook and Twitter @trustedreviews.