Netflix’s latest 5.0 app release is being displayed as ‘incompatible’ with rooted Android devices in the Google Play store.

Rooting your Android device, or ‘jailbreaking’, is a naughty way of bypassing the restrictions of the mobile operating system to get special privileges you’re usually not allowed.

The ability to delete in-house apps and gaining more control over the look and feel of a device are just a couple of jailbreaking perks. But there are dangerous downsides, like potentially voiding your device’s warranty, or ‘bricking’ it, which essentially means it becomes unusable.

According to a report from Android Police, people with rooted Android devices who tried to download Netflix over the weekend were hit with a message telling them their device was incompatible with the latest version of the app, preventing them from downloading it. 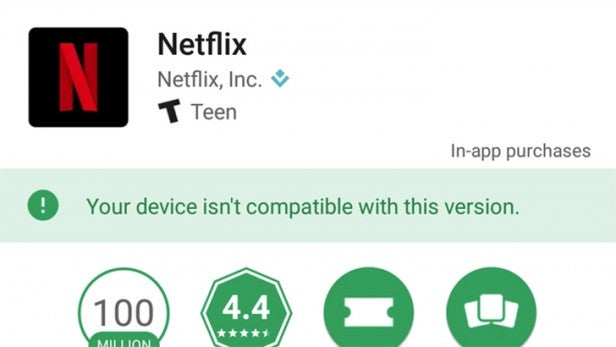 Netflix has since confirmed its intentions to lock out rooted Android users, saying in a statement: “Many devices that are not Google-certified or have been altered will no longer work with our latest app and those users will no longer see the Netflix app in the Play Store.”

While the move prevented users from downloading the app, those already running previous version of Netflix on their rooted device still had full access to the streaming service. It’s not clear why this is the case, or whether Netflix is planning to issue a blanket ban on all new and existing versions of the app in the near future.

In March this year, it emerged that Netflix is considering creating smartphone-specific versions of its original content to please subscribers who get their Netflix fix via their mobiles. It’s not unlikely that Netflix is attempting to filter out jailbreakers ahead of such content.

What do you think of Netflix’s crackdown on jailbreakers? Let us know in the comments.