Foldable screens are all the rage in 2020, with Samsung, Motorola and Huawei aiming to show why their take is the best. Another brand wanting in on the foldable action is TCL, and from what we’ve seen so far, we’re very excited.

Originally set to be announced at the cancelled MWC 2020 smartphone showcase, TCL’s duo of new ‘foldables’ are a little different to what we’ve seen so far – however, before you start checking your bank balance and arranging an increase to your overdraft, you should be warned that currently these are merely concept devices and are unlikely to ever actually be commercially available. Still, we can gaze at their innovativeness.

First is the ‘world’s first rollable extendable display smartphone’ which, as the name gives away, is a phone with a display that can expand from a 6.75-inches to 7.8-inches. Unlike folding out, like the Galaxy Fold, this concept has a motor inside that unfurls the display out when a button is pressed. 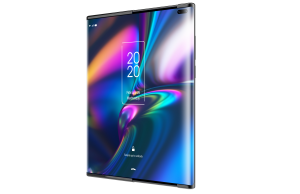 During a briefing session ahead of the launch we had a play with a dummy unit of this concept, and the idea does make sense. When the display is rolled up it’s a regular phone, press the button (or slide it out in the case of this demo unit) and you’ve got a larger screen without many obvious side-effects. Of course the unit I was using was just plastic so it’s hard to really gauge how well it’ll work in reality, but the idea of an OLED panel unrolling feels very futuristic.

TCL reps said using this rollable method avoided any creases to the display – a constant irritant with some of the foldables we’ve used so far.

TCL has also announced a completely different foldable concept, one that’s a tablet rather than a phone. Unlike the rollable phone, this is a working prototype that combines the previously announced DragonHinge and ButterflyHinge to create a device that goes from a 10-inch slate down a 6.65-inch version with three distinct folds. 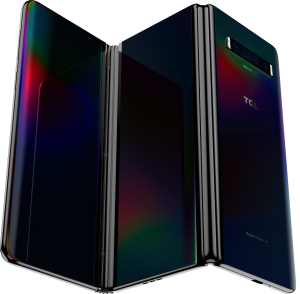 This is a bonkers design that stands out from both a usability and design perspective. We’re not entirely sure why you’d need this (it must be rather thick when fully folded up) but the fact that TCL has made it – and it works – is pretty impressive.

“With these latest concept devices, TCL has clearly shown that there is still plenty of room for new ideas when it comes to flexible and foldable display technologies, and it’s critical for us to think outside the box and lead with innovation,” said Shane Lee, general manager of the global product center at TCL Communication.

TCL might not be the first name you think of when it comes to smartphones, but these concepts show it is aiming to be a big player and likely coming in at prices lower than the competition. TCL also manufacturers the OLED panels itself, giving it a little more room for experimentation.

These devices are purely concepts, so TCL isn’t talking about specs, pricing or whether they’ll ever get released in the current form. Instead, it’s much more of a focus on the tech behind the foldable and flexible displays. Hopefully we’ll see the hinges and rollable mechanism trickle down to something more consumer-focussed soon.