When we talk about gaming hardware in 2018, we talk in the language of multi-core gigahertz processors and gigabytes of RAM. Now untethered by the constraints of physical media, games regularly consist of files heading into the tens of gigabytes.

Considering the enviable point we’ve reached in 2018, where developers are limited less by hardware and more by their own budgets and imagination, Tanglewood seems like a strange anomaly.

While most modern PC games run on hardware that is, at most, five years old, Tanglewood was designed first and foremost to run on a piece of hardware that will turn 30 in October 2018.

I’m talking, of course, about the Sega Mega Drive, the pinnacle of Sega’s run as a hardware manufacturer, and the closest the company came to dethroning Nintendo as the king of the consoles in the 80s and 90s.

Tanglewood is the brainchild of Matt Phillips, who until very recently was a programmer working at Dambusters. He quit his day job after videos of his Mega Drive-developed side projects started going viral on YouTube.

One successful Kickstarter and 18 months of development later, and Phillips is finally releasing Tanglewood to the public, a game that has proven to be a challenge unlike any other at every stage of its development.

Authenticity at every step

Phillips strived for authenticity at every stage of the development process, which meant that his first challenge was finding working Mega Drive development kits from the 90s. When no working kits were available he was forced to repair them himself, after which he more or less developed the game as though he was working on it at the time of the console’s release — although he guiltily admits that on a couple of occasions he resorted to developing within an emulator when he was working on public transport.

With the development kits in hand, the next challenge was actually making the game, which involved trawling through old development manuals and scouring the web for the communities of developers that have cropped up to support such retro development.

With just a 7.6MHz single-core CPU, 72KB of RAM, 4MB of storage capacity and a palatte of just 512 colours, Phillips had to relearn everything he knew about developing modern games, and discard modern conveniences like high-level programming languages, multi-threading, and caching. 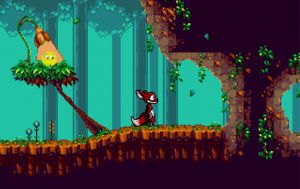 But even once the game was developed and running, Phillips’ challenges weren’t over. Although the developer would love for everyone to be able to play Tanglewood on an original Mega Drive, the realities of the hardware meant that a PC version would be necessary, which necessitated getting the game running via an emulator, which introduced a number of its old weird and wonderful bugs to the process.

For the chosen few, however, Tanglewood would be released as an authentic Mega Drive cartridge. Sega’s lack of a licensing department for a console it stopped selling decades ago meant that getting access to the official Sega logos wouldn’t be possible, but Phillips managed to piece together enough different manufacturing partners to make a physical cartridge.

At £54, they’re not cheap, and Phillips is only producing an initial run of around 1000, but getting a physical cartridge made was an important aspect of delivering on Tanglewood’s original premise.

Tanglewood is a strange game, one in which its developer had to overcome more obstacles of his own creation than what cropped up organically, but it’s all the more unique and original as a result.

Tanglewood is available now for PC, Mac, Linux and, of course, the Sega Mega Drive.

Have you still got your old Sega hardware lying around? Let us know on Twitter @TrustedReviews.