Microsoft’s Surface Laptop Go is available to buy now and it’s incredibly affordable. But you may want to wait a day before hitting order on the 12.45-inch laptop. Apple is rumoured to be unveiling a 12-inch laptop today, along with an all-new processor.

Apple announced it would transition its laptops from Intel processors to the Arm architecture back in June, with the first Arm-based Mac to be unveiled before the end of the year. It seems that day is here and the new MacBook is set to be a direct rival to the Surface Laptop Go.

While we still have much to learn about the MacBook Arm, we’ve gathered all the rumours along with information about the Surface Laptop Go in this guide, to help you decide whether it’s worth waiting for the new Apple laptop.

Surface Laptop Go vs MacBook Arm price – Which is cheaper?

Microsoft is offering multiple configurations with differing RAM and storage capacities. The fingerprint scanner won’t be available on the cheapest model either.

There’s no word from Apple on how much the MacBook Arm will cost, although we reckon it will something similar to the existing £999 MacBook Air.

Surface Laptop Go vs MacBook Arm release date – When do they launch?

The Surface Laptop Go will hit stores on 13 October, with pre-orders already open on the online Microsoft Store and various third-party retailers.

Apple will host a special event called “One More Thing” today at 6pm UK time. We expect to see the first Arm-powered MacBook unveiled at this event, so tune in on YouTube or visit Trusted Reviews this evening to follow our coverage of the event.

Surface Laptop Go vs MacBook Arm specs – Which is the most powerful?

The Surface Laptop Go’s specs have been confirmed, and it looks great. The pairing of an i5 Intel Core processor and 4GB RAM will hardly blow us away, but will likely speed through basic tasks such as web browsing and video streaming.

With Apple switching its Macs over to Apple Silicon for the very first time, it’s difficult to predict how powerful it’s going to be. Apple seems confident in the technology, so we’re hoping for a performance competitive with Intel. The leaks look positive so far. According to AppleInsider, an Apple A14X processor has scored 1634 in a Geekbench 5 single-core test and 7220 in a multi-core test, blowing the Intel i9-powered 16-inch MacBook Pro out of the water.

Tech publication NotebookCheck also suggests Apple will use an Apple A14X chip paired with 8GB / 16GB RAM. While we’ve got no indication on performance power, the publication suggests the chip will offer a battery life of between 15 and 20 hours. That sounds like a lot of stamina, but that’s typical for Arm-based laptops – the Surface Laptop Go simply can’t compete in terms of battery life when using Intel x86 architecture.

That said, we can’t be sure that this processor will be used in a 12-inch MacBook, as it may well be saved more premium devices such as the MacBook Pro instead. We’ve listed a comparison specs table below, although bear in mind that the MacBook Arm specs are not confirmed, and are merely rumours provided by the NotebookCheck report.

If rumours are to be trusted, Apple will seemingly offer better storage and RAM options to the Surface Laptop Go. However, Apple’s machine is also expected to be a few hundred quid more expensive than Microsoft’s entry-level model.

The Surface Laptop Go features a 12-inch 1536 x 1024 display, but the new MacBook could be anywhere between 12 and 13 inches. Recent reports suggest Apple will be refreshing the MacBook Air instead of introducing a completely new laptop, which could mean the MacBook Arm would have a 13.3-inch, 2560 x1 600 display. 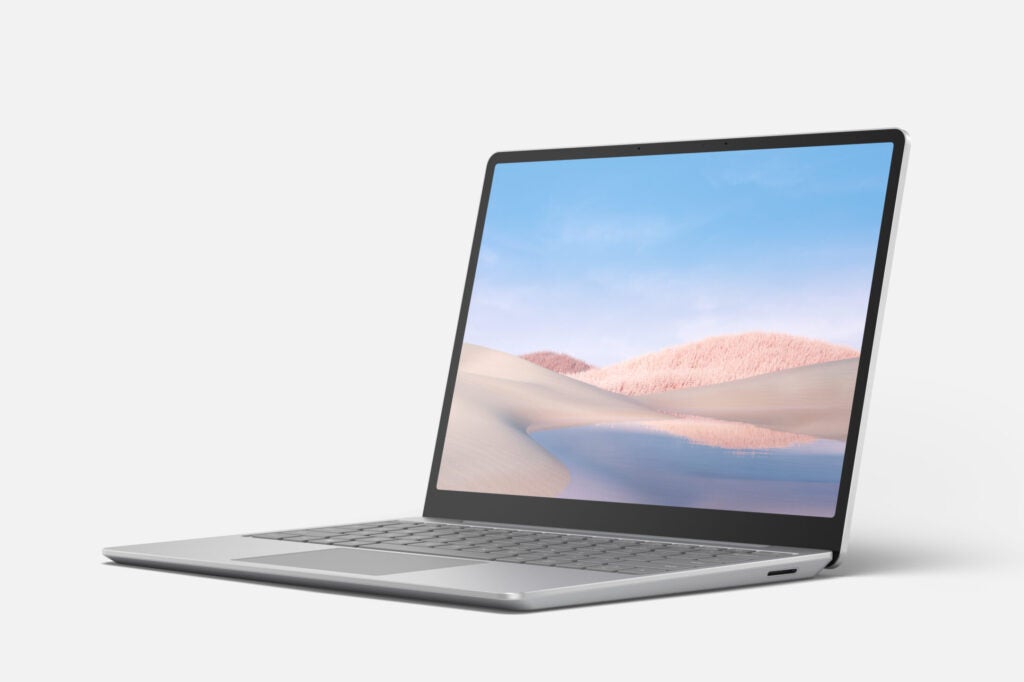 Surface Laptop Go vs MacBook Arm design – How do they look?

The Surface Laptop Go is a rather nifty device, being only 15.69mm slim and hitting the scales at 1.1kg.

The MacBook Arm is expected to weigh less than 1kg, and could be impressively slim thanks to the Arm architecture. We don’t expect to see any big changes to the MacBook design, but it’s possible Apple will opt for a slimmer bezel to create a near edge-to-edge display.

The Surface Laptop Go will also see a full-sized keyboard, with keys featuring full 1.3mm travel. For contrast, NotebookCheck claims the MacBook Arm will be fitted with Apple’s controversial Butterfly keyboard, which seems an odd decision since recent MacBooks have been upgraded with the scissor-switch keyboard.

We hope to update this section with more information on the MacBook Arm’s design following the big Apple event later tonight.

Apple and Microsoft could potentially go head to head with their 12-inch laptops later this year, with both looking to be very impressive and wallet-friendly devices.

However, with Apple offering no details on the MacBook Arm at this stage, it’s impossible to make a final judgment right now. We hope to update this page when Apple unveils the MacBook Arm this evening, and keep an eye out for our full, upcoming reviews as we take a more in-depth look at both laptops. The Surface Laptop Go is in our office now, so we plan to get our review up shortly.

If rumours are accurate though, the Surface Laptop Go seems to be the cheaper option, while Apple looks to be offering more generous RAM and storage options. The Arm architecture also looks to provide the MacBook with a far superior battery life, although it’s anyone’s guess how the performance of Apple Silicon will compare to Intel’s chips.