Microsoft has just launched the new Surface Go 2, an update to its most affordable Windows 10 tablet.

It might not have been perfect, but the Surface Go was a welcome addition to the Surface line. It was an affordable tablet that looked great and was super compact in its design.

But how has Microsoft changed it this time around? The new Surface Go 2 will be available for $399/£399 from May 12 and here’s how it compares to its predecessor.

Visually, the Surface Go 2 is very close to the original – and considering that remains a good looking device we’re by no means annoyed about this.

There is one notable upgrade though – the screen is now slightly larger, going from a 10-inch panel to a 10.5-inch one. It looks like Microsoft has reduced the bezel around the display to achieve this and considering the rim around the screen was fairly hefty before this is a very welcome design shift.

Still, a 0.5-inch increase does feel minor, and it’ll be interesting to get the Surface Go 2 in our hands to see whether it makes a notable difference. This Surface Go 2 will remain on the smaller end of the larger tablet market, with the iPad Pro starting at 11-inch and offering a 12.9-inch model too.

Like the Go, the Go 2 has a kickstand that can pop out if you’re working at a desk. It also retains the USB-C port on the side for charging and data.

Microsoft is still calling this a PixelSense display, with a 3:2 aspect ratio and a 1800 x 1200 resolution. The touchscreen also remains compatible with the Surface Pen for doodling and drawing. 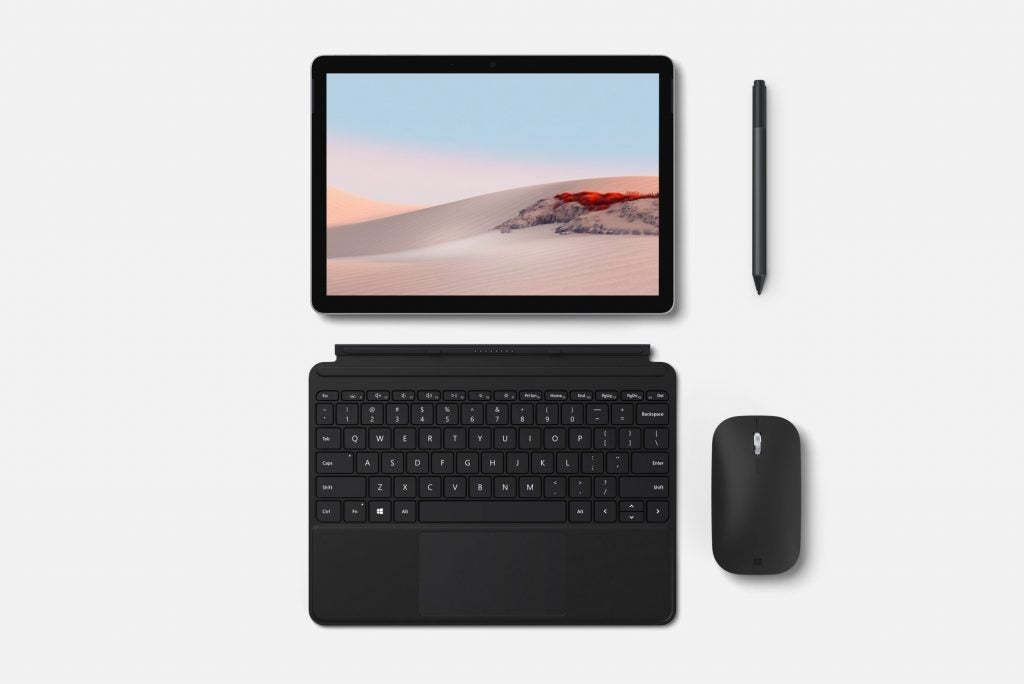 There are plenty of improvements internally with the Surface Go 2

Until we get the Microsoft Surface Go 2 in our hands, we won’t be able to get an idea of how much faster or longer-lasting it is than its predecessor, however, Microsoft has given some basic stats for us to work with

For instance, the Intel Pentium Gold chipset that received criticism in the original Surface Go is still here in the base mode however pay more ($629) and you’ll get an 8th-generation Intel Core M option. According to Microsoft, this should see performance boosted by 64% but we’ll have to test it ourselves to be sure. There is LTE support too. RAM options go up to 8GB, with storage ranges from a 64GB eMMC to 128GB SSD.

Another improvement touted by the brand is better battery life, though at this stage it’s unclear just how much extra stamina we should see.

While this has become commonplace for all Surface products, don’t expect to find a Type Cover (Microsoft’s handy keyboard attachment) boxed with the Go 2. There might be plenty of bundles offering the two, however by default you’ll have to shell out extra for those keys.

Microsoft said these, along with other accessories, will be available in a bunch of colours – black, red and blue, to be precise.

The Surface Go 2 has better microphones and camera improvements

One update that will now likely seem a lot more important is the upgrades given to the cameras and microphones. Microsoft has added dual studio mics and said the 5MP front camera has been improved for low light video calling.

There’s a new app for the camera too, which Microsoft said should “make it easy to scan documents, and whiteboards – whether you’re sharing notes from a meeting or turning in homework.”