BEWARE: Spoilers! This is an article that discusses The Force Awakens plot points, and may also spoil the storyline of Star Wars: Episode 8.

The director of Star Wars: The Force Awakens may have accidentally let slip who Rey’s parents are.

J.J. Abrams opened up about Rey’s family during a Q&A session at the Tribeca Film Festival on Friday.

In The Force Awakens, viewers are introduced to the mysterious Rey, a force-sensitive scavenger with uncertain origins. It’s implied that her parents abandoned her during her childhood, which has led to rampant speculation as to who might be her mother and father.

Speaking at the session, Abams said:

“Rey’s parents are not in Episode VII. So I can’t possibly say in this moment who they are. But I will say it is something that Rey thinks about, too.” 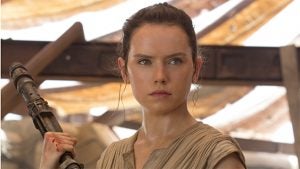 Rey, as portrayed by Daisy Ridley

Fans were quick to jump on the comments, as most theories had pointed to either Luke Skywalker or Han Solo being Rey’s father, both of whom appear in Episode VII.

Interestingly, however, Abrams actually later clarified his comments during conversation with Entertainment Weekly:

“What I meant was that she doesn’t discover them in Episode VII. Not that they may not already be in her world.”

The fact that Abrams felt the need to clarify his comments seems to actually reinforce the theory that Rey’s parent(s) appear in The Force Awakens.

Of course, any theories on Rey’s family ties are still speculation at this point, even with Abrams’ latest comments in minds.

Rey is played by British actress Daisy Ridley in the Star Wars franchise, and is set to appear in Star Wars: Episode VIII.

Episode VIII is scheduled for release on December 15, 2017, and is already being filmed.