According to users, the bot presents itself as a friendly Twitch official and promises to give you a free subscription to Nitro Games, as long as you ping across your server details. Cue happy-go-lucky-types handing out the details and getting kicked out of their own server when the bot gains access.

Apart from a few grammatical mistakes, the Twitch message is disarmingly official-looking, plastered with logos and accompanied by a colourful graphic. But savvy Discord users should be able to guess that it’s a fake straight away, as Discord’s Nitro Game pass was shut down last year. 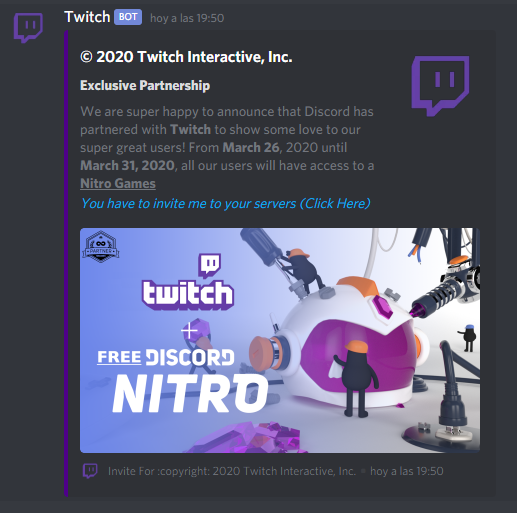 The bot’s purpose isn’t entirely clear. Some users are reporting that the bot is managing to ban them from their own servers and removing users from their channels, while others report that inviting the bot in doesn’t seem to have any affect.

One thing the bot can do once it’s accessed your server is track down your contacts and send them the same scam message. Discord also has permissions access to your camera and microphone, which is another reason to remain vigilant against this new breed of bot.

Writing on reddit, a Discord employee said: “We continue to ban these accounts as quickly as we can. We are working on more long-term mitigations to this to make these kinds of bot spam infeasible.

“Later this week, we will be showing which mutual servers you share with a bot so you know where exactly the spam is coming from, so you can leave or restrict DMs from that server. Additionally, we are working on more aggressive anti-spam measures to combat these kinds of bots.”

Related: Where to buy a Nintendo Switch

Strangely, some people are reporting that when they post details about the bots on reddits, their posts are removed by Discord admin. We’ve reached out to the company for comment.