Looking very similar to the existing Sony Xperia Z smartphone, the supposed shot of the Sony Xperia Z Ultra does seem a lot larger than the flagship, but that’s only in comparison to the leg it is lying upon.

Tipped to pack a 6.44-inch Full 1080p HD screen running Android 4.2, the Sony Xperia Z Ultra could have a stylus and be a rival to the reportedly upcoming Samsung Galaxy Note 3.

Check out the picture of the Sony Xperia Z Ultra at the bottom of the story.

Taking place on July 4 at 9.30am in France, the invitation reveals a first look at the supposed Sony Xperia Z Ultra device, that blurs the boundary between the Sony Xperia Tablet Z and the flagship Sony Xperia Z smartphone.

“Sony Mobile reserves a big surprise for you,” the invitation reads in French. “Don’t forget to mark the date in your calendars.”

The second half of this is printed in hand-written script on the invitation with a stylus, adding to the rumour that Sony will use the event to launch the 6.4-inch Sony Xperia Z Ultra as a rival to the Samsung Galaxy Note 2.

From the image, the Sony Xperia Z Ultra seems to be a very thin device, with rumours suggesting it will be just 6.5mm thick. To put this into perspective, it’ll be thinner than the 6.9mm Sony Xperia Tablet Z, 7.2mm iPad mini, 7.6mm iPhone 5 and 7.9mm Sony Xperia Z.

Of course, the invitation only shows the side of the device, including the headphone jack at the top, the signature power button and volume slider. There’s a dedicated camera button down the bottom too and what looks to be a lanyard hole.

According to the rumours, the Sony Xperia Z Ultra should have a 6.44-inch Full 1080p HD display, powered by a 2.2GHZ quad-core Qualcomm Snapdragon processor with Adreno 330 graphics and 2GB of RAM.

It will have an 8-megapixel camera in the rear, 2.2-megapixel front-facing camera and 16GB of internal storage bumped by the inbuilt microSD card slot.

There has been an inconsistency in reports as to whether the Xperia Z Ultra will feature the water- and dust-resistant qualities of the Xperia Z and Xperia Tablet Z. However, the fact that the headphone jack is open could be a sign that it won’t be waterproof or dustproof. 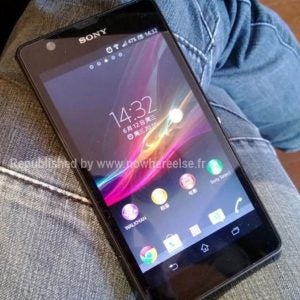 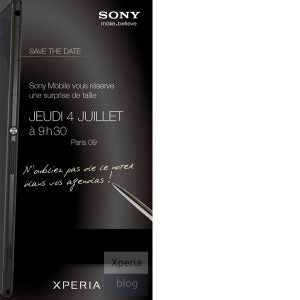