The Consumer Electronics Show 2016 is in full swing here at the Las Vegas Convention Center, and the TrustedReviews team is on-site, reporting live from the Sony Press Conference.

“The first driver of our future is all about choice,” Hirai explains, describing Sony’s three-pronged strategy for the future. “We’ve made a choice to make innovative products and services. We make it easier to do things that you want to do.”

“,” he continues. “This is a choice at Sony to stand out from the crowd, not simply to fit in. We’ve spent decades building a recognised brand that’s beloved, and that stands for something in your hearts and your minds.”

“We recognise that today all of you are exposed to more products and brands and content than ever before,” the CEO adds.

Hirai revealed that the remaining two prongs of Sony’s 2016 strategy are accepting challenges with future products, and embracing passion through technology. 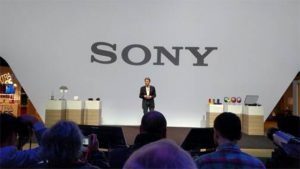 Hirai sung the praises of the PlayStation 4, one of Sony’s most successful products to date.

“PlayStation 4 sets the benchmark for our organisation,” he adds.

Hirai announced that PlayStation 4 has sold 5.4 million units this holiday season, and that cumulative sales since launch have now reached more than 35 million units globally.

Mike Fasulo, President and COO of Sony Electronics, then took to the stage to talk about the future of entertainment. 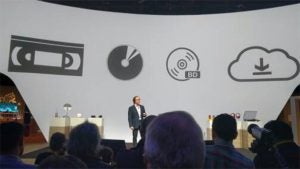 “Tonight I’m very excited to talk to you about relevant advancements that are designed to make your lives fuller and more meaningful,” says Fasulo, speaking to press at the event.

He says the camera will offer reduced noise in low-light conditions thanks to an improved Exmor sensor.

It also comes equipped with “fast, intelligent autofocus”, although we’ll need to test those alleged credentials ourselves. 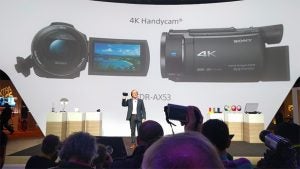 “The amount of stories I’ve been able to tell with my family is unparalleled,” says Gainor. “[The A7 has] changed my life.”

Gainor showed off some impressive low-light shots taken using the latest version of the A7, including a surprisingly detailed room scene lit by a single tea-light candle.

“I think it’s the greatest camera in the world,” he adds.

Fasulo also revealed that Sony will be announcing new camera products “throughout 2016”.

The COO went on to talk about high-resolution audio, an area in which Sony has already shown serious interest.

“We constantly see customers asking for more volume,” says Fasulo. “But with Sony, it’s not about turning up the volume, it’s about dialling up the sound quality.” 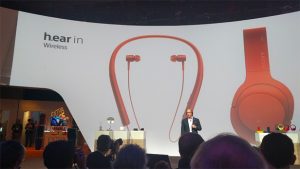 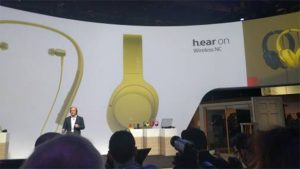 Also on the agenda were h.ear in and h.ear on wireless in-ear and on-ear headphones.

Fasulo moved onto a new vinyl record player from Sony – the PS-HX500 turntable.

“We’re listening to those who want to preserve their vinyls in hi-res quality,” he says. “The renewed popularity of vinyl LP records has created an opportunity.” 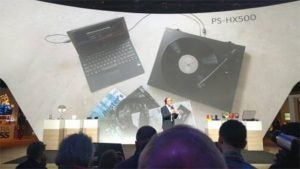 The vinyl player lets you convert original LPs to a digital hi-res audio format – great for those with plump vinyl collections.

The speakers will all be water-resistant too – fitting, considering it’s raining right now in Vegas. 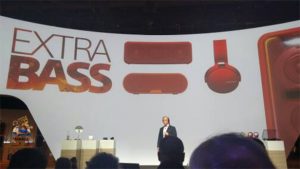 The COO then moved onto the smart home, describing Sony’s movements in the sector with Life Space UX.

“We’ll be bringing Sony’s LED bulb speaker, portable ultra-short-throw project, and glass sound speaker to the USA in 2016,” he continues.

The portable projector throws up to an 80-inch image, and can be set up anywhere – on a table or against a wall.

Fasulo was then joined on stage by Lucas Watson, the VP of Global Brand Solutions at YouTube, to talk about the future of content creation.

“In the past year, we’ve reached over a billion people every single month on the platform,” says Watson. “In fact, mobile has become our primary consumption device.”

“,” he adds, revealing a 50% year-on-year growth for that particular metric.

“We’ve been supporting 4K on YouTube as a platform since 2010,” the VP continues. “We’re huge supporters of the quality that 4K provides.”

Over 25 billion hours of 4K content were viewed on YouTube in the past 12 months, according to Watson.

“Watching television can be an incredibly rewarding experience,” says Fasulo. “Creators see the superiority of HDR and they’re on board.”

Sony used the conference to publicly unveil its new 4K UHD HDR logo – it looks a lot like the hi-res audio logo.

Sony also showed off the Bravia X93D series of TVs, which use the X1 processor and a new slim backlit drive that boosts peak brightness and black levels.

“Picture quality is important to Sony,” says Fasulo, “and we recognise that a great viewing experience includes great design.”

To that end, Sony will be expanding its svelte design aesthetic – debuted last year with the 4mm-thin X90C – across a number of TV models throughout 2016. 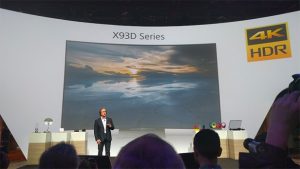 “Each year, we come to CES and we discuss picture quality improvements – and yes, each year, our TVs continue to get better,” the COO continues. 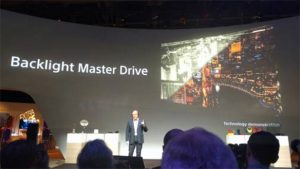 The Sony-only technology will also improve the depths of blacks.