Sony CEO Kazuo Hirai took to the stage for Sony’s IFA 2015 press conference to officially unveil a host of new products. Here’s the pick of the biggest announcements

Take your pick of three Xperia Z5 smartphones
After talking up the company’s HDR TV technology and its latest cameras, the Sony CEO officially announced the Xperia Z5. Just month’s after the launch of the Z3+, Sony has introduced its latest flagship in three models. The Xperia Z5, the Z5 Compact and the Z5 Premium, which packs an innovative 4K display.

We’ve already seen the trio of new Sony smartphones in action, and you can get our first impressions on all three by clicking on the links below:

“H.ear” headphones gives you that high-res feeling
To make the most of the new Xperia smartphones high-res audio capabilities, Sony introduced a new range of “H.ear” headphones. There’s an on-ear pair and what Sony claims are the first in-ear headphones offering the ability to listen to high-resolution audio on the move. No pricing details or release date have been announced as yet, but we expect they won’t be cheap. 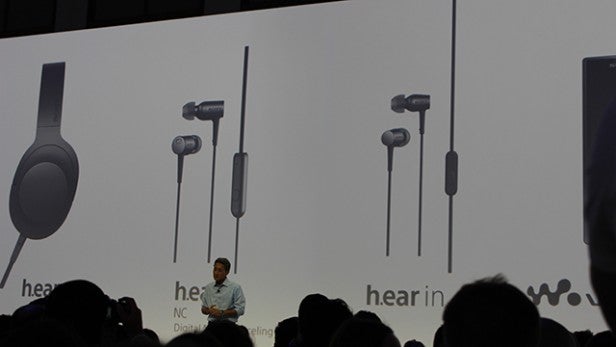 More Life Space UX kit on the way
Sony introduced its connected platform last year, and the company committed to adding more products to the range with a new short-throw projector and symphonic light speaker. Both are expected to launch in the spring next year and the new additions will be on show at IFA this week.

Sony’s innovation lab
The Sony Seed Acceleration Program was set up by the company to encourage internal talent. Sony has revealed that it already has a collection of products and technology that might one day make its way into Sony products in the future. The latest is a Wena Wrist smartwatch, which looks more like a traditional watch than Sony’s most recent Android Wear efforts. We’re going to check it out at the Sony booth and let you know what we think of it.