Sony AF8 OLED Vs Sony A1 OLED: What’s The Difference?

While CES 2018 had plenty of eye-catching concept TVs to dazzle the eye, ‘real’ new TVs were relatively thin on the ground. One of the most intriguing of these, though, was Sony’s second range of OLED TVs, the AF8 series. TV expert and Trusted Reviews contributor John Archer sees how it stacks up against last year’s effort, the Sony A1 OLED.

It turns out that the AF8s are actually pretty similar to Sony’s ground-breaking A1 OLED debutantes. There are, however, some differences – if you know where to look.

The first thing you notice is that while the AF8 retains the same extremely thin, speaker-less frame around its screen that you get with the A1, it stands bolt upright, rather than leaning back slightly like the A1s do.

While I personally didn’t have a problem with the slight angle of the A1, I know many other potential buyers did. So it’s sensible – and in keeping with the brand’s regularly professed desire to offer products to suit as wide a demographic as possible – that Sony has now introduced a more straightforward vertical design.

Making the screen vertical has meant doing away with the A1’s angled support leg. Instead, the AF8 sits extremely low – as in, its frame almost rests on your furniture – on a new, centrally mounted metal desktopfoot.

This is nicely made, though the main thing about it is that you can barely see it when you’re sat down to watch the set. Add to this some clever cable management, and the AF8 continues the theme established with the A1 of presenting you with ‘just a picture’ to watch, so you can become fully immersed in the on-screen action.

The AF8 is able to exist within such a minimal chassis because it joins the A1 models in using acoustic screen technology to produce its sound. This vibrates the screen to deliver a stereo surround effect and is one of most innovative integrated TV audio technologies we’ve seen in the last couple of years. 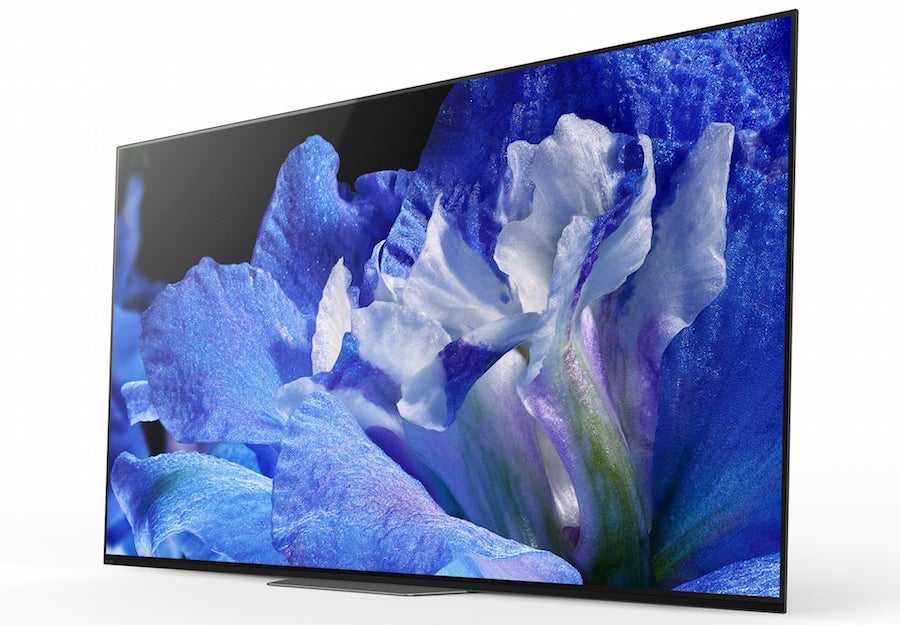 Since the A1 features a bass speaker in its angled support leg, I’d expected the AF8 to offer a reduced audio performance. However, Sony assures me that the sound output remains the same.

Not having to accommodate the angled back leg does, though, greatly reduce the overall depth of the AF8. In desktop stand configuration, the AF8’s footprint comes in at 255mm; that’s 84mm less than the A1 when used in its floor-standing mode.

One other notable difference between Sony’s two OLED ranges is that the AF8 will only be available in 65- and 55-inch versions. There’s currently no suggestion that there will be a 77-inch model like there is in the A1 range.

Picture performance differences between the A1 and AF8 would be a major talking point but, well, there aren’t any. Sony confirmed this with me during an in-depth meeting on its new TVs at CES.

This is perhaps a shame. Having made such a great job of its debut OLED TV, many AV fans are seriously keen to see what Sony might achieve with its true second OLED generation. On the other hand, if the AF8 offers a similar level of performance to the A1 but – as I suspect – at a lower price point, then that too should be welcomed by OLED fans currently thwarted by the A1’s relatively high price.

Needless to say, we’ll be taking a look at the A8F in a lot more detail as soon as we can get our hands-on one.

Are you excited by Sony’s new AF8 OLEDs? Share your thoughts with us @TrustedReviews.