Ahead of MWC 2018, Qualcomm has revealed new details about the Snapdragon-powered Windows 10 laptops set to be released in early-2018 . Here’s everything we now know, including details of the UK and US networks that will offer them, plus pricing, release date, and battery life information.

The key selling point for this new range of laptops is that, by utilising Qualcomm’s 10nm Snapdragon 835 SoC instead of the more power hungry Intel processors typically found in Windows 10 laptops, all-day battery life could finally be a reality for PCs.

This will be aided by the fact that the devices in question will run Microsoft’s stripped back Windows 10 S operating system (now Windows 10 S Mode), rather than the chewier Windows 10 Home or Windows 10 Pro.

Back at the company’s 2017 5G Summit in Hong Kong, Executive VP of Qualcomm Technologies Cristiano Amon told Trusted Reviews to expect the devices to offer an “extreme gain in battery life” compared to traditional laptops, saying:

“For Netflix streaming with LTE, we’re looking at 28, 29 hours playback. We’re looking at all-day computing with everything on in excess of 16, 17, 18 hours.”

There’s currently a trio of Snapdragon 835 laptops ready to hit shelves in the near future, which have been variously teased since late-2017. These are the Lenovo Miix 630 (pictured below), HP Envy x2, and Asus NovaGo. As well as the Snapdragon 835, they’ll also be equipped with Qualcomm’s Snapdragon X16 modem, which offers Gigabit LTE speeds and eSIM functionality

Crucially, Qualcomm has now unveiled its network and retail partners in a number of key markets, including the UK and US.

In the UK, Snapdragon laptops are initially lined up as an EE network exclusive, while our US readers will be able to choose from T-Mobile, AT&T, Sprint and Verizon. You’ll be able to buy them from Asus Stores, BT Shop, John Lewis, Microsoft Stores and PC World here in Blighty, while over in the States the launch retailers are Amazon and Microsoft Stores.

UK-specific pricing for the trio of devices hasn’t been confirmed yet, but we’re hoping to find out at Mobile World Congress in Barcelona.

In terms of a final release date, we’ve only be told that Q2 2018 is the window to watch, but again, we’ll be digging for more concrete details out in Spain. 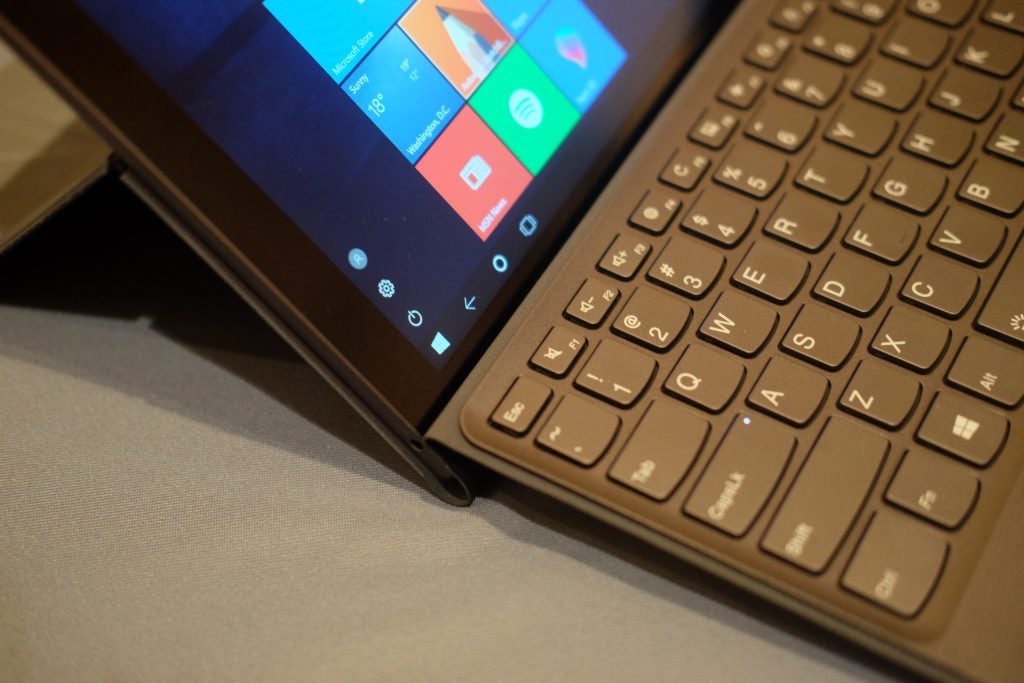 Snapdragon Laptops: Why you should care about these new Windows 10 notebooks

PCs with built-in mobile transceivers have been around for ages, so what’s actually new here? That’s a good question.

What makes this an interesting batch of new products is the fact that Qualcomm’s Snapdragon 835 will be powering laptops for the first time. This is big, because Qualcomm chips are based on ARM designs, which are very different to the x86 architecture used on AMD and Intel chips – the kind you’ll find in regular laptops.

Until fairly recently, Windows didn’t work on ARM-based chips, but with that hurdle out of the way, the first-generation of Snapdragon laptops are poised to offer the kind of thin and light design most consumers want, combined with ample processing power and – perhaps most importantly – more robust battery life.

This is because the Snapdragon 835 uses what’s called bigLITTLE tech, where four cores are high power and four are low power, so background tasks are relegated to the lower-powered cores when they’re not urgent and your battery life is better preserved.

As we’ve said, that means we’re being told to expect true all-day or even multi-day battery life from Snapdragon-powered laptops, even if they’re being used for high-intensity tasks like streaming.

The other really attractive thing about the Snapdragon 835 in terms of connectivity is Qualcomm’s latest X16 LTE modem, which has a theoretical maximum speed of a gigabit. Whether you get that will depend on your mobile reception, of course, but it should mean that on-the-go Netflix binging is a dawdle.

We’ll have to test the first batch of Snapdragon 835-powered laptops in full before we can corroborate these promises, but it’s safe to say that the combination of high-speed, ‘always on’ LTE connectivity and day-plus battery life would be one of the most exciting PC developments in some time.

Are you excited for the first-generation of Snapdragon laptops to launch? Tweet your thoughts to us @TrustedReviews.