Sky has laid out the biggest change to its Q platform since its launch, refreshing the UI and bringing Disney+ in HDR.

With HDR now available, Sky Q is set on delivering more improvements to the service, with a raft of updates arriving on customers’ boxes in the coming weeks.

Customers will see a new expanded UI view; TV shows and sports will be given their own central hub in Show Centre and Sports Centre respectively, while improvements to voice discovery are expected to make it more intuitive.

With voice discovery, Sky hopes to make finding content even easier. Improvements have been made to the Q platform’s advanced voice search to make it more intuitive. It’ll now know whether you’re referring to themes or genres, as well actors. Say “comedies with Bruce Willis” and it’ll bring up Hudson Hawk (though that wouldn’t be our first choice), along with other relevant suggestions. Coming soon is the ability to ask for entertainment themes, such as ‘new shows’, ‘Halloween’ or ‘Christmas’.

The static UI bar is gone, replaced by a dynamic collapsible menu on the left-hand side. It’ll open up the UI, offering increased visibility for content on the Q platform (a third more, in fact). The change means more TV, film, video, podcast, music and games recommendations to whistle through, which Sky hopes will mean less time searching and more time watching.

Related: How to get HDR on Sky Q 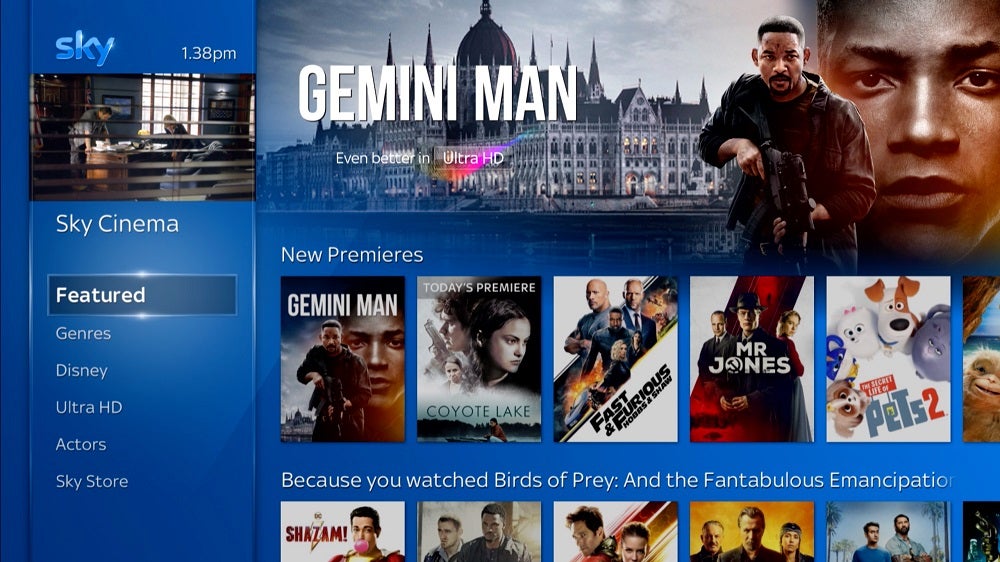 This feature gives every TV series its own hub. Show Centre will be where all the seasons, episodes, recordings, broadcast schedules and on-demand links are gathered.

A new smart button will offer speedy access to the next episode. For example, if you’re halfway through an episode of Gangs of London, it’ll say “continue episode 3”; or if the episode has finished, it’ll suggest you start the next episode not too dissimilarly to Netflix’s Watch Next. The smart button is also context sensitive, so it’ll switch between Continue, Delete, Watch from the Start, or Play the next episode, based on what you watched last.

This is for sports fans. Similar to Show Centre, Sky Q users can now find all the latest games, news, documentaries, podcasts, etc in various Sports Centres. Speak ‘football’ into the voice remote, and it’ll take you to a page that collates live and on-demand content from Sky Sports, Sky Sports App, BT Sport, terrestrial TV, YouTube and Spotify into one place. Other supported sports include F1, Cricket, Golf, Boxing, Tennis and more. Leagues and sporting events will be getting this feature soon.

When Disney+ was announced for Sky Q, there was disappointment that it’d just be in HD. Following the HDR update, Disney+ will now be available in HDR, with more HDR content expected on the service the months leading up to Christmas. Find out here how to get Disney Plus on your Sky Q box and add it your bill.

The Sky Q refresh is rolling out now, with all customers set to receive the revamped Sky Q platform by August 12th.