Good news if you’re a Sky Q or NOW TV customer. Prime Video is now available on Sky and NOW TV devices ahead of Christmas, adding more entertainment options to each platform.

Sky and Amazon have today announced a new long-term partnership, one that will see Prime Video appear on Sky and NOW TV devices in the UK (and Europe). Going in the other direction, the NOW TV and (for those in Europe) Sky Ticket apps will be made available on Fire TV devices.

The addition of Prime Video continues Sky Q’s pivot into an aggregated entertainment platform, joining the likes of Netflix, Spotify, Disney+, YouTube, fitness app FiiT, ROXi and BBC iPlayer as part of Sky Q’s offerings, as well as having BT Sports as part of the package.

For UK customers that means they can watch all the Premier League fixtures live this Christmas without having to switch to another device. And if you’re a subscriber to Prime, you’ll be enjoy its content in 4K HDR with the likes of Borat Subsequent Moviefilm, The Boys, The Grand Tour, as well as the All or Nothing programmes such as the documentary that follows Manchester City available to view. 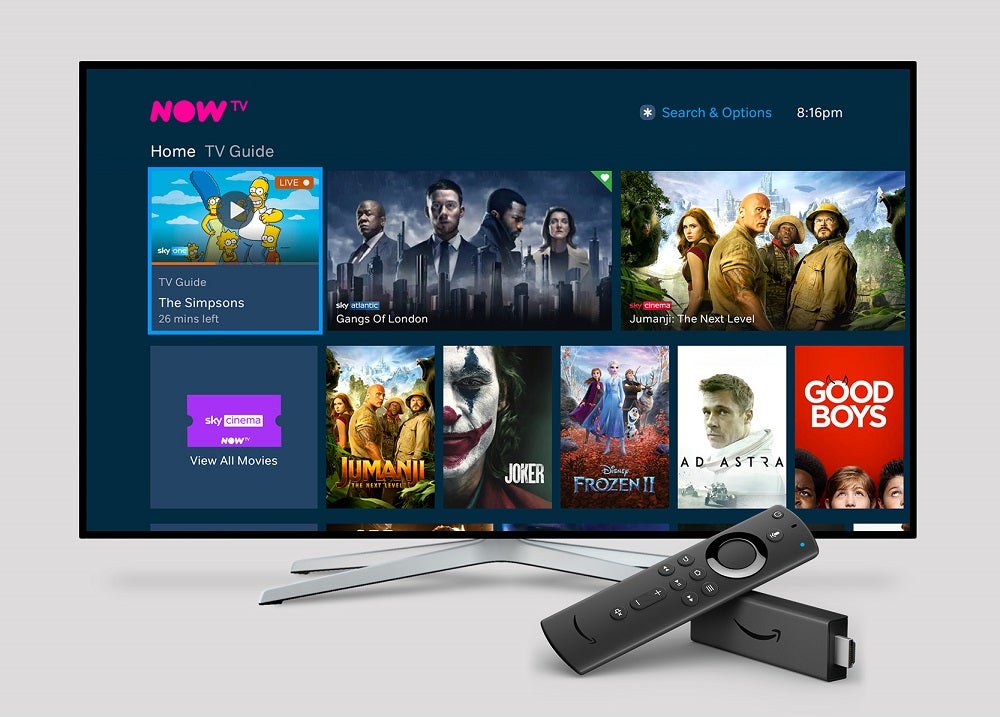 To find Prime Video, viewers can utter “Launch Prime Video” into their voice remote to pair the Sky Q box with their existing Prime membership/Prime Video subscription (Sky customers not signed up to Prime Video are eligible for a 30-day free trial).

You can also discover it via the Apps rail, and they’ll be a curated “must-watch” section that features on the Sky Q Home page alongside content from Sky, Netflix and Disney+. More integration with Prime Video is expected in 2021, with voice search for TV series, movies and more on the table.

Prime Video will also be made available on NOW TV, and going in the other direction is NOW TV, rolling out on Fire TV devices and the Fire TV Edition smart TVs in early 2021. You can sign up for Sky Cinema, Entertainment and Sports passes by heading over to nowtv.com/amazon.

Stephen van Rooyen, EVP & CEO UK & Europe Sky said: “Anyone who needs to get stuck into something new after The Undoing on Sky Atlantic will now be able to flip right over to The Boys on Prime Video, without ever leaving Sky Q. Amazon Prime Video TV shows, movies and more will sit alongside Sky Originals and Netflix, as well as apps like Disney+, BBC iPlayer, FiiT and much more. This will make it even easier for you to access everything you love, in one place.

Jay Marine, Vice President, Prime Video Worldwide, said: “With winter settling in, and our new binge-watch obsession The Wilds about to launch, it’s a perfect time for Sky customers to catch up on our award-winning Prime Video TV shows, movies, and live sport, including Prime Video’s exclusive live broadcasts of 20 English Premier League games this December. Plus, with NOW TV launching on Fire TV – customers in the UK have never had it better when it comes to choosing what to watch however they are watching.”