Remotes that control your home are nothing new, and we’re huge fans of Logitech’s excellent Harmony Elite, but the Smart Remote by Sevenhugs does things a bit differently.

Rather than having a load of buttons and forcing you to manually select the device you want to control, the Smart Remote automatically switches its settings depending on where you point it.

Point it towards your Sonos and volume controls will appear, point it at a lamp packing a Philips Hue bulb and you’ll be able to change the colours or turn it off. Heck, you can even aim it at your front door and an option will pop up to call an Uber.

To accomplish this almost wand-like quality, the remote connects to base stations that can be scattered around your home and packs in a load of sensors from a gyroscope to an accelerometer and a more common IR blaster. There’s also Bluetooth and Wi-Fi, and Sevenhugs claims you can control more than 25,000 devices with the remote. 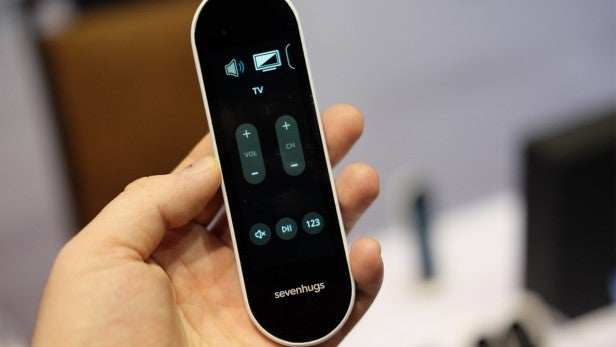 It’s pretty impressive stuff, especially when you consider it’s much smaller than the competition and is barely bigger than the Siri remote that comes with the Apple TV. Like the Siri remote you’ll need to keep this charged, with the internal battery lasting a few days before you’ll have plug it in to the included USB-C dock.

While we weren’t able to test out how accurately the motion sensing capabilities worked, we were impressed by the Smart Remote. It’s dinky, yet the large HD touchscreen that covers the entire front is responsive and sharp. There’s a handy button on the base station that buzzes the remote if you lose it, and the iOS or Android set-up app again looks easy to use.

Like the Logitech Harmony, you can create bespoke scenes that accomplish multiple tasks with a single button press and as it supports infrared it can learn to control things like your TV, even if they’re not ‘smart’.

But, the Smart Remote will live or die by how well its motion sensors work. There would be nothing worse than pointing it expectantly at a Sonos and then being given the option to turn your light off. So lets hope everything works as advertised when it goes on sale later this year.

You can pre-order the Smart Remote on Indiegogo right now for $229, but that price will jump to $299 when it officially launches in September.

If this the one remote to rule them all? Let us know in the comments box below