Croteam and Devolver Digital have come together to announce Serious Sam 4: Planet Badass, a new entry in the cult-classic series. With his last adventure transporting us into virtual reality, Serious Sam 4 seems to be a more traditional FPS experience with the fast, frantic gunplay and tongue-in-cheek humour the franchise is known for.

Trusted Reviews has compiled everything you need to know about Serious Sam 4: Planet Badass including all the latest news, release date, trailers and more.

Serious Sam 4: Planet Badass release date – when is it coming out?

Having only just been unveiled, a release date has yet to be confirmed.

We do however know that the game is due to come to PS4, Xbox One, and PC.

Serious Sam 4: Planet Badass trailer – how does it look?

You can check out the one and only trailer for Planet Badass (thus far) below:

Serious Sam 4 Gameplay Preview — How does it play?

We were treated to an extended demonstration of the game’s French map, which despite being 80 square miles (which developer Croteam handily points out is three times bigger than Skyrim) is just one of the game’s 15 levels.

Since the map is so big, our demonstrator quickly procured our protagonist a motorbike, which he could then use to drive across the epically sized map. Showing something already a stark departure from past games.

In contrast, the level we saw played was almost entirely outdoor, and heading inside the buildings (which our demonstrator pointed out have been photo scanned from real French cottages) was an optional extra to procure some bonus weapons and loot. 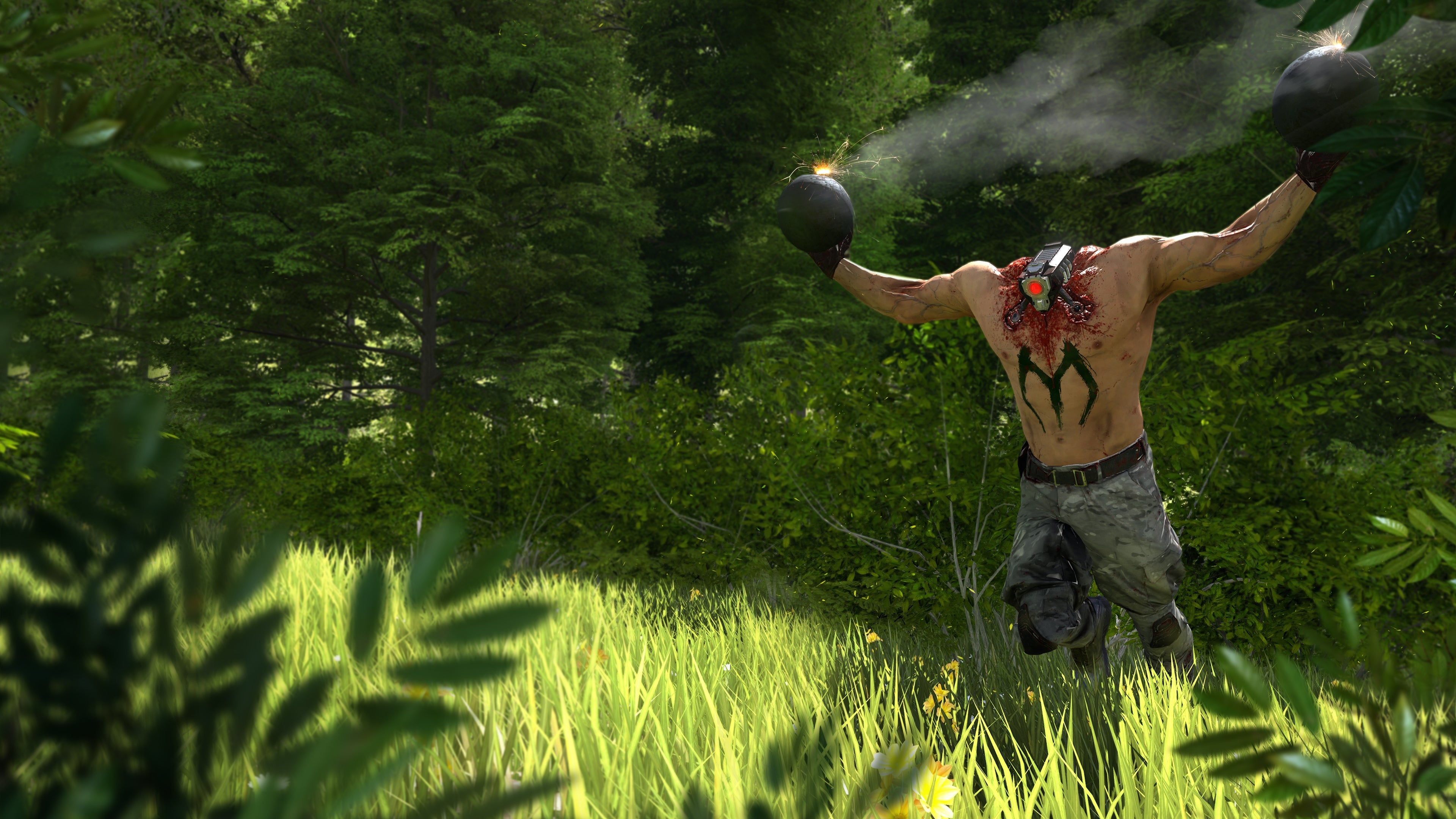 It can’t hurt to be as tooled up as possible, because this entry sees even more enemy types hunting down our serious protagonist. As well as classics such as Khnum and Beheaded Kamikaze, there are also new squid-faced enemies, that quickly run at you quickly and generally make a nuisance wherever possible.

Before long we’d picked up a distress signal from two Americans trapped in a church tower. Although there was no HUD implemented during our play session (it’s due to come at a later date) our demonstrator quickly navigated themselves to their location and began taking down the squid-faced enemies that were keeping them pinned.

Our reward was a comically oversized new sniper rifle, thrown down from the church-tower in order to let us take down more enemies from a distance. 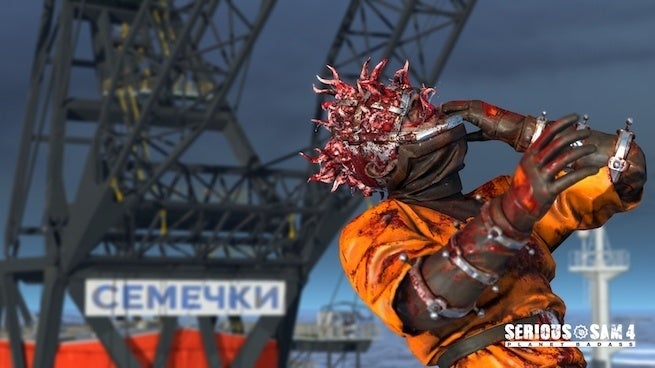 And take them down our guide did. Our demonstrator quickly trained their sights on a number of enemies on the horizon, and with each shot, they exploded into a comically large fountain of blood.

This was nothing though, compared to what happened when we got our hands on a combine harvester. This optional side vehicle (which is one of many) proved the most effective killing machine of all, and we mowed down dozens upon dozens of enemies as we trundled across the map.

In fact, Croteam hopes to have thousands, if not hundreds of thousands, of enemies visible on-screen at a time and ready for you to mow down. Our demonstrator reported that the team already has 50,000 enemies rendering successfully on-screen, and the hope is to reach 100,000 before the game ships.

Unfortunately, our demo was cut short before we were able to see what would happen when we plowed straight into the mass of Beheaded Kamikaze that appeared over the horizon, suggesting that this number of enemies on screen isn’t quite ready to be seen by the public. 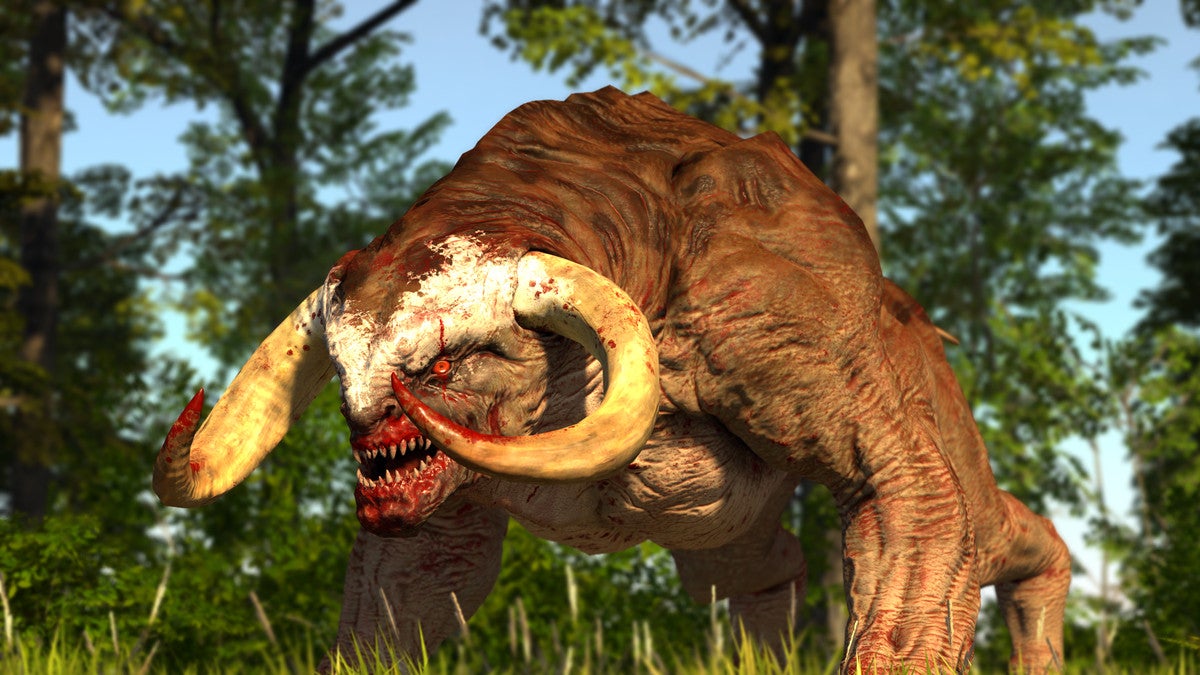 Despite the name, Serious Sam 4 remains a decidedly silly game. From its corny dialogue to its ridiculous enemy design, the game is tailor-made to make you laugh rather than cry with frustration at its difficulty.

There’s little going on here that we haven’t seen before in other shooters, but anyone who has a penchant for the ridiculous should keep their eye on this upcoming game.

What do you want to see from Serious Sam 4: Planet Badass? Let us know on Facebook and Twitter @trustedreviews.