Most of us are used to hearing about Xbox One vs PS4, but there’s a retro console rivalry that’s just as interesting – the Nintendo Classic Mini vs the Sega Mega Drive Classic.

After Nintendo announced it was to re-release the NES console, news came that a Sega Mega Drive – or Sega Genesis in the US – was also getting the re-release treatment.

Well, sort of. The ‘new’ Genesis/Mega Drive is actually just a rebranding of an emulator that’s been around for a while.

With that in mind, we thought we’d tlay out all the information for both these consoles to give you a better idea of what’s going on. What does each console offer? Can you play all your old games on both? We’ve got the answers to all your questions right here.

Sega vs Nintendo – The consoles explained

When it comes to the Mega Drive/Genesis, the console isn’t built by Sega, but licensed by third-party manufacturer ATGames. ATGames has been making an emulation box for years, and has merely rebranded its product for this year.

The NES Classic Edition, on the other hand, is being built by Nintendo, and is a miniaturized version of the original NES from 1985.

Also, while the NES hooks up to your telly via the HDMI cable, Sega fans will need to hook up via old fashioned AV cables – another clue that the Mega Drive console isn’t exactly an official re-release. It’s also worth bearing in mind you’ll need an AC adapter for the USB cable which powers the NES classic as the adapter doesn’t come bundled with the console itself.

Nintendo’s offering also comes with one controller, modelled on the original joypad, which can be plugged into a Wii Remote in order to play Virtual Console games on Wii or Wii U. You’ll also be able to use your Classic Controller or Classic Controller Pro on the NES Classic, so multiplayer shouldn’t be too much of an issue. Additional NES controllers will also be avaialble separately.

AtGames’ Mega Drive copy comes with two official-looking controllers, but be warned – several outlets have reported the consol itself doesn’t feature any official Sega hardware and it seems the machine itself leaves a lot to be desired when it comes to actually running the games. Sound reproduction has been singled-out as particularly shoddy.

The Megadrive does come with 80 games built-in. Among the bundled games are every Sonic title released for the platform, as well as the three original Mortal Kombat titles. 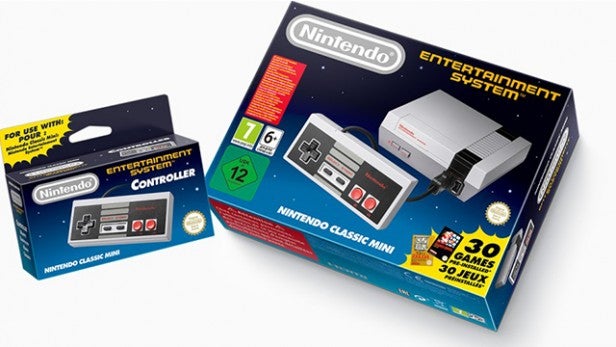 Better still, unlike the Nintendo version, it’s compatible with all of the old school Sega Mega Drive cartridges, so if you’re harbouring a tonne of classics then they’ll all work too. How well they’ll work remains to be confirmed by us, however.

Here’s the full list of games. Some are actual Sega games, but many are bundled software from third-party developers which never appeared on the original console: 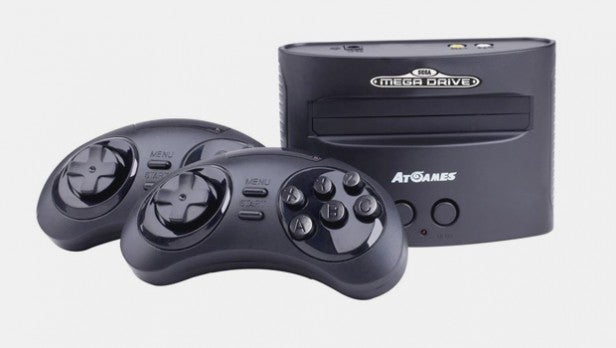 The Nintendo alternative however, comes with only 30 games preinstalled and no way to play old cartridges. It also doesn’t look like the company is going to make it possible to add more games as there’s been no suggestion of online connectivity for future downloads.

One nice feature Nintendo has added, however, is save states. Now, when you stop playing, the system will remember where you left off so you can come back to the game at a later date and pick up from the same point.

Here are all the games you get with the NES Classic Mini:

The Nintendo Classic Mini has been available since November 2016, retailing for $59.99 in the States and £49.99 in the UK. The Mega Drive is also currently available – and has been since at least 2012 – including the newest rebrand, which celebrates the 25th anniversary of Sonic the Hedgehog.

Note that, due to high demand, the Nintendo Classic Mini has suffered from availability issues and some retailers have inflated their prices as a result.

Authentic Nintendo Classic Mini or knock-off Sega Megadrive? Let us know your thoughts in the comments below.