What’s a weekday without another iPhone 7 leak? The spy shots are coming thick and fast ahead of the phone’s September launch, but today’s “leak” appears to give us a new angle on the upcoming handset.

In the past few day, we’ve already had a video claiming to compare the iPhone 7 with its predecessor, the iPhone 6S, but this latest shot appears to provide a comparison of a different kind.

The photos, first spotted by NowhereElse, show what seem to be three new iPhone models side by side, labelled as the iPhone 7, iPhone 7 Plus, and iPhone 7 Pro. 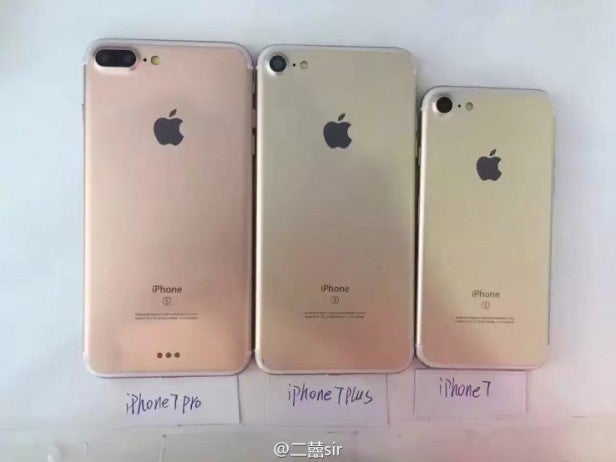 Rumours have been circulating for some time now that Apple is preparing to release a Pro version of its flagship phone, and the shot seemingly confirms this model will come with the oft-rumoured dual rear-camera setup.

Reputable analyst Ming Chi-Kuo first reported that Apple was readying this Pro model of the iPhone 7 earlier this year.

Interestingly, if these latest shots are genuine, which is far from confirmed, we could also see a smart connector on the Pro model – a connection currently used on the iPad Pro to attach a smart keyboard.

The largest handset shown in the photos seems to have similar, if not identical, dimensions to what is widely thought to be a 5.5-inch iPhone 7 Plus, while the standard model is expected to come with a 4.7-inch screen. 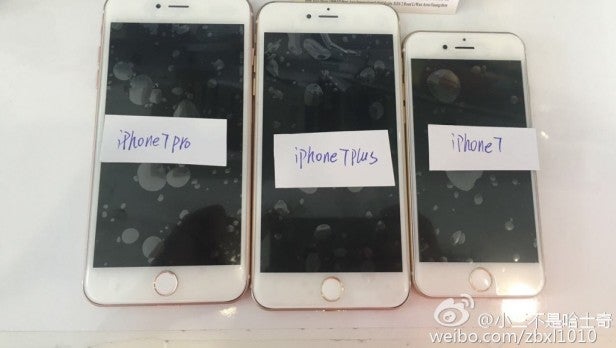 All three models in these latest photos conform to previous leaks that show newly curved antenna lines that now run along the top and bottom edges of the case, along with enlarged camera lenses.

Apple is also heavily rumoured to be removing the headphone jack on the iPhone 7, replacing it with its own Lightning connection.

While today’s “leak” certainly looks convincing, there’s no way to confirm that someone hasn’t pulled off a decent Photoshop job, so take it with due caution.

Apple is expected to launch the iPhone 7 in early September.

WATCH: iPhone 7: Everything we know so far

What do you think of these spy shots? Real or fake? Let us know in the comments.