If you’ve ever watched a movie and wondered what’s just out of frame, you’re in luck. ScreenX has arrived in the UK, and it’s a multi-projector cinema experience that has you looking at three screens instead of one.

The first one in the UK was just installed at the O2 in North Greenwich, London. I was invited to check it out ahead of its public opening today. Here’s what you need to know. 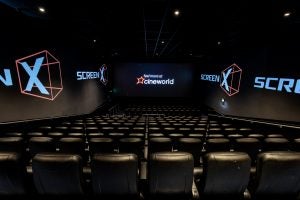 How does three-screen viewing work? The middle one is like any cinema screen. It displays the same film and format as what you’ll eventually see on Netflix. ScreenX presentations beam additional footage on the walls to the left and right. That’s a 270-degree field of view, designed to fill up your peripheral vision – theoretically making the picture more immersive.

It’s a similar idea to the Ambilight system on Philips TVs, which fill your peripheral vision with light. Only this isn’t just light – it’s proper video footage, composed, filmed and edited at the same time as the standard theatrical material and subject to the same CGI and colour grading efforts.

Movies arrive at the cinema in two digital files (most cinemas no longer use reels of film): one for the standard film, the other for the sides or ‘wings’. They are stitched together using the clever ScreenX software. The combined image is then fired out of five projectors. The main picture uses one but the wings need four. Special fabric is lined on the walls to keep colours consistent, although that won’t hide the fire exit signs. 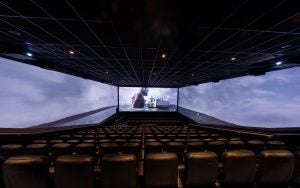 ScreenX was first launched in 2015 and has featured such titles as King Arthur: Legend of the Sword and Black Panther. In the UK, it is launching with Ant-Man and the Wasp, The Meg, and The Nun. My demonstration used footage from The Meg, 20 minutes of Jason Statham fighting a massive shark.

There are inevitable similarities with the super-sized IMAX format. With the picture extending past the sides, it is a genuinely immersive experience. My field of view was entirely filled with shots of the ocean, which naturally took me closer to feeling like I was part of the film.

If a standard cinema screen isn’t enough for you and you need something extra to transport you to that world, this does the job very nicely. Considering the work involved, the price is reasonable: ScreenX tickets cost £3 more than usual.

Unlike IMAX, however, ScreenX isn’t seamless. Scenes shot in IMAX format fill in the top and bottom of a standard 2.4:1 format screen, so what you get is a single, massive picture. For ScreenX, the expanded images aren’t on the same wall. It’s not exactly a panoramic experience.

If you can get past this, there’s also the issue of a scene not entirely being in extended format. For instance, the scene I saw of The Meg switched from Jason Statham fighting the shark to the supporting cast elsewhere. The movie regularly switched between ScreenX super-wide and standard formats as the film cut from one location to another – which can be distracting. 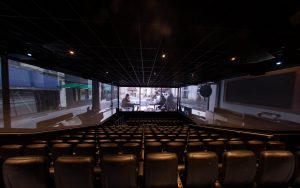 Of course, these are still early days for the new technology, and filmmakers will no doubt find better ways of using the new tools at their disposal. Having three screens provides potential for new methods of storytelling.

Ever since cinemas came along, we’ve seen various attempts to revolutionise it. The 3D phase has come and gone several times, but the super-sized IMAX format has stuck. Then there’s Dolby Cinema’s enhanced contrast and precision audio, and Samsung’s experimental LED screens. Maybe one day we’ll all watch movies with three screens instead of one.

To date, ScreenX has been installed in 151 auditoriums around the world and Cineworld has been tasked with building another hundred. South Korea alone has 84, and China has 46. If you’re in the UK and you can’t make it to London, there’s also the one in Cineworld Speke, and Leeds White Rose will be getting the upgrade in September 2018.