We’ve already had a few sets of schematics purporting to show the iPhone 8 leak in the past few weeks, and now we’ve got what look to be the most detailed yet.

The latest set of schematics arrived on Slashleaks (via) and provide an in-depth look at what could be the final design for Apple’s next iPhone.

While several features shown in the design have been seen before, there’s a few new additions worth taking note of in these latest schematics.

Related: What will the new iPhone be called?

First up, there’s the dual rear camera, shown here with the two lenses stacked vertically rather than horizontally – a rumour we’ve been hearing a lot about in recent weeks.

It looks as though the vertical placement is down to the positioning of the front-facing sensors and camera, which are shown here in the form of a front-facing camera and flash along with what is likely the rumoured face-scanning technology we’ve been hearing so much about.

There also looks to be an infrared sensor on the top-right-hand side, with the speaker itself sitting in the middle. The red outline also seems to indicate the screen itself will cover the speaker and various forward-facing scanners and cameras. 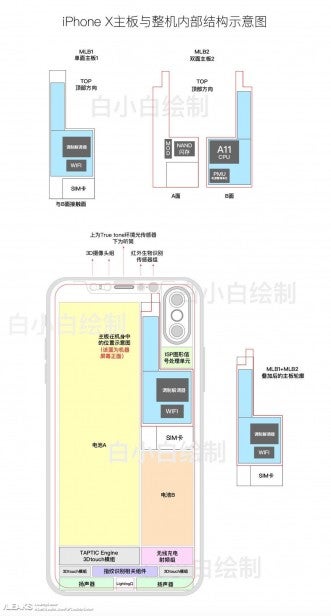 In fact, according to the schematics, it looks like the screen will cover nearly the entire face of the phone, which is one of, if not the biggest rumour we’ve been hearing about the iPhone 8.

The other big rumour is that Apple will be removing the home button in favour of a virtual home button built into the display itself.

These drawings seem to confirm that rumour, with the bottom of the phone stuffed with all-manner of component, including the fingerprint scanning module which is seemingly tucked above the Lightning port alongside a Taptic engine and 3D Touch modules.

Previous reports have it that Apple could move the fingerprint scanner to the rear of the device much like Samsung with its Galaxy S8, but it seems this particular design incorporates technology that would allow Apple to integrate the sensor into the display itself.

Analyst Timothy Arcuri has previously stated that he believes Apple is struggling to develop such technology that works reliably, but that’s yet to be confirmed.

marked ‘B’ – an interesting addition in and of itself, which sits alongside a larger battery unit marked ‘A’.

It’s unclear why the phone would have two battery packs, but there’s no way to know if these schematics are legitimate so at this point it would be difficult to speculate.

If they are indeed on the money, however, it would seem Apple has reduced the size of the phone’s mainboard, which chimes with previous rumours of a stacked mainboard that would allow the company more room within the chassis.

Of course, at this point, all of this remains unconfirmed. There’s no way to tell whether these new designs are legitimate, so apply the usual caution here.

Apple is yet to confirm anything about its next iPhone, and is remaining tight-lipped on the subject for the time being but stay tuned for more in the coming weeks and months.

Let us know your thoughts on the new schematics in the comments.