In December, Samsung revealed that it had teamed up with TikTok to bring the popular video sharing app to its smart TVs, in a move that surprised the team of tech experts at Trusted Reviews.

Keen to get the inside scoop on why Samsung thinks TikTok, an app focussed on mobile content, will benefit TV viewers we chatted with Samsung’s Head of TV for Europe, Nathan Sheffield, at CES last week. 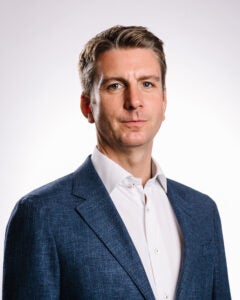 The TikTok app is an exclusive for Samsung TVs in the UK and one that, according to Sheffield, fits with Samsung’s goal to build the best entertainment platform by introducing fresh experiences for its users.

“I think it was a perfect combination actually of both Samsung and TikTok that we’re able to collaborate together and to create a world first in that regard and I think unlock a completely new experience on TV and one that has actually specifically been created for home viewing”, said Sheffield.

Why use TikTok on your TV?

TikTok has already gained immense popularity as a mobile app. As of 2020, the app recorded over two billion downloads worldwide, which might make you wonder what benefits you’ll get from viewing content on a Samsung TV over a regular smartphone.

“We’ve seen that 29% of people are now what we call ‘virtualizing’ on larger screens”, said Sheffield. “In that regard, the benefits of TV and QLED really come into play because what you have there is obviously the QLED picture quality in itself, but also the intelligence and the algorithms are going to be built in that can upscale all of that content up to 8K, of course if you have an 8K TV”.

Samsung’s TVs also have the skills to adjust to ambient surrounds, adjust contrast levels to fit the light in the room and adjust audio levels to optimise the sound, whether than be dialogue, music or action.

Sheffield cited the Sero, in particular, as a good match for the app. The 43-inch TV allows users to view TikTok content in portrait as intended, transferring the mobile experience onto a larger, more optimal display.

Sheffield also referred to the phenomenon of ‘edu-tainment’ and Samsung’s #LearnOnTikTok hashtag.

“We now see people looking to generate their own experiences, whether that be through cooking, or whether that be through fitness or just investigating fun facts on TikTok,” said Sheffield. “Again, the application allowing you to have that on the big screen is also fantastic and you can share that with other members of the household, so I think there are clearly some benefits of taking a service that originated on a small screen now onto a big screen”.

Samsung brings a shared TikTok experience to the home

TikTok is largely dominated by the younger generation, but by bringing the app to the living room and automatically operating in a filtered Restricted Mode, Samsung’s version comes across as much more family-oriented.

“The beauty of TikTok is that there’s such a varied array of content”, said Sheffield. “So, whether you’re a Gen X, a millennial, a mature millennial, older, there’s content for everyone. I think that’s where we see that without the need for a subscription you don’t even need to have an account if you don’t want one you can just jump straight into it and go search and discover the content that’s most relevant to you”.

This brings up one potential drawback to viewing TikTok videos on a smart TV. One of the most compelling features of the app is its ability to draw users in by recommending new content based on what they already enjoy watching.

We asked how this feature might be affected by households having a shared experience, and thus a shared ‘For You’ page, as well as whether Samsung has any plans to introduce shared accounts with multiple feeds.

Users are able to log out of one account and into another on their Samsung TV to see more personalised recommendations, but as of right now seeing that content does require that additional step.

TikTok is the latest addition to Samsung’s portfolio

The launch of the TikTok app is one of many ways Samsung has pushed to blend lifestyle and hardware based on its research.

“Over 20% of people that buy the Serif actually Instagram that TV, so you can see how socially active those users are”, said Sheffield. “So, again they’re engaging in other social applications such as TikTok. You know again it demonstrates how we’re blending those two words together and building up the lifestyle proposition”.

Finally, we asked whether the TikTok app was created in response to the Coronavirus pandemic, by transforming that mobile experience into one for the home.

“No, it wasn’t created in regards to the pandemic”, said Sheffield. “As we seek to build out the best entertainment platform and create those new experiences, this is just adding to our ever-growing portfolio. And, I think in that regard what we saw with TikTok was a natural gravity to our platform in the same way that we managed to bring on major partnerships such as Apple TV and Apple Music that we announced at CES a year ago”.

TikTok is now available on all Samsung Smart TVs released in the UK since 2018, including the brand’s 4K and 8K displays, the Smart Monitor, the Premiere, the Frame and the Serif. The app will be launching on the Sero later this year.