Samsung plans to sell refurbished Galaxy Note 7 handsets, according to a new report.

After two dramatic recalls, termination of manufacturing, and a plea for customers to turn off all Note 7 handsets forever, it was safe to assume Samsung had killed off its latest flagship for good. But a report from The Investor, the Korea Herald’s business blog, suggests that Samsung isn’t quite done with its most fiery phone.

Reporters at the publication, which is based on Samsung’s South Korean home turf, believe that Samsung may begin selling refurbished Galaxy Note 7 handsets as soon as 2017. One industry source is quoted as saying: “Samsung has not made a final decision yet, but it will likely sell the refurbished Note 7 units next year.”

According to the report, Samsung will likely target emerging markets like India and Vietnam, where low-end phones are typically popular. The Note 7 is a seriously expensive handset, but it’s likely Samsung will drop the price significantly considering the phone’s reputation, and the fact that they’re refurbished models. This would be an excellent chance for Samsung to rid itself of spare Note 7 stock, and recoup some cash in the process. 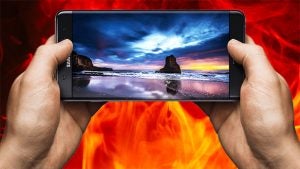 Samsung first recalled the Galaxy Note 7 on September 2 after an internal investigation uncovered a serious battery flaw that was causing some users’ handsets to explode. The phone maker then had to issue a second recall after it emerged that some replaced handsets were also exploding. The Galaxy Note 7 is now no longer available to purchase, with Samsung reportedly focusing all attention on next year’s Galaxy S8.

Samsung is expected to release its next flagship phone in February or March next year, with a Galaxy Note 8 model confirmed to be coming later in 2017.

What did you think of the Samsung Galaxy Note 7? Let us know in the comments.