The 5nm Exynos 1080 will be unveiled at an in-person event in Shanghai, China on November 12. The chipset is rumoured to be the one to power the Samsung Galaxy S21, however other leaks suggest this won’t be the case.

Samsung announced the chip’s launch on its official Weibo account with the image below (via SamMobile). 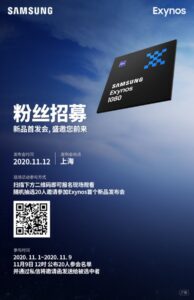 The company has already confirmed that the 5nm Exynos 1080 will include the new ARM Cotrex-A78 CPU cores, along with the Mali-G78 GPU. According to ARM, these cores will deliver a 20% performance increase compared to their predecessor, the Cortex-A77.

The Exynos 1080 will also feature a built-in 5G modem meaning it will support the next generation of connectivity.

Samsung has yet to state which phones the Exynos 1080 will be found inside, but one possibility is the Samsung Galaxy S21, or Galaxy S30.

The S21 will most likely be kitted with the Snapdragon 875 in the US but, in the UK and other parts of the world, Samsung usually powers the flagship line with its own Exynos chips.

Read our review of the Samsung Galaxy S20

The Exynos 1080 is certainly a contender for the S21, with an early benchmark shared by Ice Universe placing the Samsung chip well ahead of the Snapdragon 875 Plus.

However, many outlets are suggesting the 1080 will be found in more mid-range handsets. Rumours suggest the 1080 could instead be the successor to the Exynos 980, which was found in the Galaxy A51 5G and the Galaxy A71 5G this year.

Another possibility is that we’ll see the S21 run on the 5nm Exynos 1000 chip. According to a leaked benchmarking test, the 1000 is three times faster than the Snapdragon 865, making it well suited to a premium phone like the S21.

We expect to find out more about the chip and which phones it might power at the event in Shanghai next Thursday.