While the names sound similar, there are quite a few differences between the Samsung Galaxy S20 and the S20 Ultra. Here’s what you need to know when picking between the two.

Not looking to splash out on the 5G model but want a ton of data? Three is back with its beefy data tariffs with this fully loaded 100GB plan.

Looking for a smaller dose of data? Why not go for this fantastic, affordable EE plan and benefit from a number of network perks as well as 5G connectivity.

Trade in your old handset and save up to £450 when you trade in to the official Samsung store.

Specs and Camera – Are the Galaxy S20 Ultra’s megapixels worth it over the S20?

We’ve long been heralding the arrival of 5G, so it’s not surprising to see that most of Samsung’s latest phones support the new technology. For the S20 Ultra and S20 Plus, you’re getting 5G whether you like it or not – but there is a 4G version of the S20 model.

Both the standard and the Ultra handsets have a 120Hz refresh rate OLED display, this gives everything a far smoother look. These are quality, slightly curved displays and the high refresh rate is the icing on the cake. One thing to note is that you’ll have to sacrifice the QHD+ resolution for that 120Hz goodness.

The Ultra has a hearty 6.9-inch display, while the S20 has a smaller 6.2-inch screen. This makes the latter more pocket friendly. Both new phones use Samsung’s AMOLED screen-tech, so you can expect great colour-contrast on each.

Related: The best Android phones for 2020

As with previous Samsung flagships, you’ll get a different chipset depending on where you live. Buyers in Europe will get Samsung’s flagship Exynos 990 chipset, while those in the US will have Qualcomm’s flagship Snapdragon 865. All the phones come with Android 10 and Samsung’s One UI overlay pre-installed.

One of the big hardware upgrades from the new series is the main camera on the Ultra handset – this has been bumped up to a whopping 108-megapixel f/1.8 sensor. The model also has a 12-megapixel f/2.2 ultrawide lens and a 48-megapixel f/3.5 telephoto cam crammed onto its rear.

Throw in the fourth ‘DepthVision’ camera on the back of the phone along with the 40-megapixel selfie snapper. In comparison, the S20’s camera specs are a little closer to those of its predecessor. It comes with a 12-megapixel f/1.8 main camera and a 12-megapixel f/2.2 ultrawide. But the telephoto on the S20 might be slightly better than that of the Ultra, as it uses a 64MP f/2.0 lens.

The standard S20 also has a 10-megapixel front snapper instead of the 40-megapixel option found on the Ultra and it lacks the additional ‘DepthVision’ option.

So, are the cameras any good?

Well, the Ultra might have better specs on paper but we didn’t find it that much better with actual use. The high megapixel sensor seems to lead to some focussing issues and unless you’re really after those zoom features the pictures aren’t that much better than the S20.

That isn’t to say the results aren’t great, because they are. Both phones take excellent snaps, with bright colours and a real punch of contrast. Video is excellent too, with footage able to be recorded in 8K across both devices.

Related: Here’s what we made of the Samsung Galaxy S10

There are some hefty storage options with the handsets, which is always good to see. Both the S20 and the Ultra models come with 128GB of storage as standard and have MicroSD slots to bump that number up. You can also grab a pricier version of the Ultra that comes with a healthy serving of 512GB, though we’d suggest you stick to the expandable options.

Battery life and charging – The S20 Ultra last longer, but neither are an endurance champion

Samsung has chosen to add in a 4000mAh battery for the S20 but has opted for a beefier 5000mAh battery on the S20 Ultra. We reviewed the Exynos versions of these devices and while you might get different results with the Qualcomm variants, we found neither offers industry leading endurance.

Here’s what we said in our Samsung Galaxy S20 Ultra review: “If you want the phone to comfortably last you the day, the options are there to make that happen. If you know you’ve got a charger nearby and want to really push that display then that option is available too. This is great, even if it does feel like you have to lose some of the phone’s best attributes in order to get the best battery life.”

And here’s what we said about the battery life of the smaller Samsung Galaxy S20: “The issue is that 120Hz display. I managed 90-120 minutes less screen-on time with this option enabled during my week with the phone than when it was set to 60Hz (about four hours). Keep things at 60Hz and FHD+ and you’ll easily make it through the day without much fuss.”

Like the rest of the tech world, Samsung is embracing the wireless trend. As such, both new phones have speedier wireless charging thanks to the company’s deployment of “Fast Wireless Charging 2.0.”

Look and feel – Which phone is prettier?

There are a few design changes here but nothing radically different when compared to previous entries in the flagship Galaxy S series. On the back of the phones, the cameras now sit in a dark rectangle on the left, while the selfie-cam has been shifted to the centre-front of the handset.

The Ultra is larger than the S20 and noticeably thicker. It also has a much more prominent camera bump on the back and that might put some people off.

For us, the sleeker, slimmer nature of the S20 means it’s the easier phone to handle. Even the Plus model – which is basically the S20 with a larger screen – is far nicer, visually, than the Ultra. 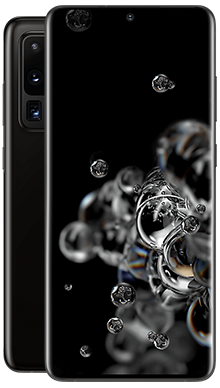 Go big with this 100GB tariff with the elite S20 Ultra handset and benefit from all the data you could need to binge and stream.

For the complete Galaxy S20 Ultra package, this unlimited everything tariff from Vodafone is just the ticket.

Happy with your current tariff and got the cash to buy the top tier flagship outright? Trade in an old handset when purchasing your S20 Ultra and get a possible saving of up to £450.

The Samsung Galaxy S20 Ultra is a hard sell to anyone but the most die-hard of Android phone fans. It’s very expensive, has some camera issues and can be quite hard to hold due to its size.

Whereas the Galaxy S20 is just a great phone that ticks all the boxes. It doesn’t feel like it’s sacrificing much when compared to the Ultra model and it’d be our pick for most people.