Which new Samsung should you buy? The Galaxy S10 or the bigger Galaxy S10 Plus

But which of these 9 out of 10 flagship smartphones is the better buy? The differences between these two phones are relatively subtle, revolving around things like screen size, front camera spec and battery capacity.

We’ll run through these subtle but potentially meaningful differences in the following piece, which draws from our extensive experience with both phones. We can safely say that you won’t be disappointed with either of Samsung’s current champs.

But which smartphone is likely to squeeze those precious extra drops of satisfaction out of you?

Examining the spec lists of these two phones is a case of spot the difference. There really is very little between them on paper.

The global editions of both the Galaxy S10 and Galaxy S10 Plus run on Samsung’s custom Exynos 9820 CPU (America and China get the Snapdragon 855), which has been built using an 8nm manufacturing standard. That’s not the most efficient process on the market – Apple, Huawei and Qualcomm are all making 7nm chips – but they’re highly capable all the same.

More important to this piece, the two phones offer similarly impressive (though not class-leading) levels of performance. No doubt aided by the fact that both handsets pack an identical 8GB of RAM, the two phones scored roughly equally in all of our benchmark tests. 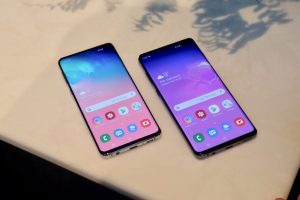 In real world terms, too, both phones handled everything we could throw at them, from 3D games to loading RAW photos into Lightroom. When it came to multitasking, apps sometimes stayed loaded in their live state for an entire day.

The fact that the Galaxy S10 Plus packs an additional vapour chamber cooling system doesn’t really seem to give it a noticeable performance advantage, in our experience. Which is a shame, because it sounds really cool in every sense.

Undoubtedly the most obvious spec difference here relates to the displays of these phones. While both are Super AMOLED displays with 3040 x 1440 resolutions, the Galaxy S10’s 6.1-inch screen is a fair bit smaller than the 6.4-inch Galaxy S10 Plus. Naturally this makes the larger phone better for media consumption, though the Galaxy S10 display is easier to use one-handed.

Whichever size you prefer, these are arguably the two best smartphone displays on the market. Samsung is really good at making vibrant yet colour-accurate AMOLED displays, and these represent its best work yet.

Most of the rest of the specs for these two phones are identical, including the twin storage capacity options of 128GB and 512GB, with microSD expansion for both. Both also have Fast Wireless Charging 2.0 and Wireless PowerShare, the latter of which lets them charge other Qi-compatible devices.

Both phones also utilise Samsung’s ultrasonic in-display fingerprint sensor, which is an improvement over the optical variants found in their rivals.

Despite there being a glaring difference in battery size – the Galaxy S10 Plus has a 4100mAh battery versus the 3400mAh unit in the Galaxy S10 – there wasn’t a pronounced difference in stamina during our test period. Both are firmly in the one-day battery life zone, and both tended to be gasping for a recharge come midnight. 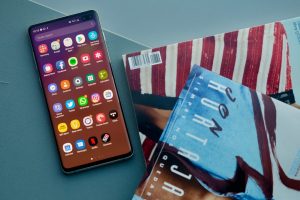 The Samsung Galaxy S10 and Galaxy S10 Plus are variations of a single design approach. Which is a highfalutin way of saying that they look exactly the same.

It’s a strong design though – all glass surfaces, metal rims, and curved edges. Add in some much-reduced bezels and the lack of an unsightly fingerprint sensor, and you’re looking at arguably the two most handsome phones on the market.

Obviously the Galaxy S10 Plus is the bigger of the two. It’s roughly 8mm taller, and 4mm wider, thought the two phones share the same 7.8mm thickness. The Plus is also 18g heavier.

These increased dimensions might prove significant depending on how you carry your phone around. The Galaxy S10 is certainly the easier of the two to cart around in a trouser pocket or compact bag. 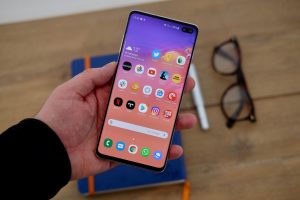 The larger display of the Galaxy S10 Plus actually fills more of the front of the phone, and we all know that more screen is better. It has a higher screen-to-body ratio of 93.1% as compared to 88.3% for the Galaxy S10.

Talking of front-filling screens, both phones pack Samsung’s new Infinity-O display technology. This is an alternative approach to the notch first introduced by Apple, which places the front-facing camera(s) within the screen boundary, almost like a little island.

On the Galaxy S10 it looks quite neat, with a circular hole-punch in the top right corner of the display. The Galaxy S10 Plus doesn’t look quite so good, however, with a secondary selfie cam providing an elongated lozenge shape. It’s difficult to ignore. Both can look a little odd with third party apps, too, which tend to treat the Infinity-O as a regular notch and simply blank the whole row out.

As we’ve already touched upon, the Galaxy S10’s smaller display makes it the easier phone to handle one-handed. That said, the Galaxy S10 Plus feels remarkably compact for such a big phone, courtesy of those reduced bezels.

Both phones are IP68-rated for dust and water-resistance, so they’re almost as tough as they are pretty. Or at least, they would be if they weren’t predominantly made of glass. It’s a very 2019 problem, and one that’s hardly exclusive to Samsung.

Despite the similarities of these two phones, we’ve been able to pick out subtle differences in every area so far. Not so with the rear cameras. They’re absolutely identical triple-sensor affairs.

Both have a 12-megapixel primary sensor with dual-pixel autofocus, optical image stabilisation and an adjustable aperture that can switch between f/1.5 and f/2.4. These are accompanied by a 16-megapixel f/2.2 aperture super-wide-angle fixed-focus sensor for those zoomed-out wide shots.

Finally, both the S10 and S10 Plus cram in a 12-megapixel, 77-degree telephoto autofocus sensor with an f/2.4 aperture and OIS for when you want to get up close to the action. 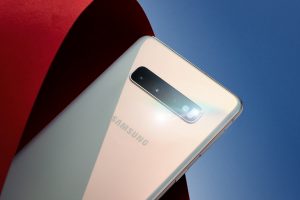 When combined, this makes for two highly versatile camera systems, as capable of capturing stunning vistas as they are at zooming in on a sporting event.

In general shooting conditions, both the Galaxy S10 and Galaxy S10 Plus produce highly detailed and reasonably balanced shots. That said, our image results fell a little way short of the very best smartphone cameras like those of the Pixel 3, the Huawei P30 Pro and even the iPhone XS when it came to colour accuracy and exposure.

There is one difference between the two photographic set-ups, but that relates to the front cameras. Both phones pack a 10-megapixel front-facing camera with a fixed f/1.9 aperture and dual-pixel autofocus. But only the S10 Plus includes a secondary 8-megapixel f/2.2 autofocus camera for superior depth detection on your selfies.

We called the Samsung Galaxy S10 “the best Android phone you can buy today” in our review. While the Huawei P30 Pro has muddied the waters somewhat in recent weeks, we stand by that verdict.

In fact, the main rival for the throne is the Samsung Galaxy S10 Plus. With a bigger display and a slightly improved selfie camera, it’s technically the superior phone of the two. We question whether those enhancements make it worth the £100 premium for most people, however. If anything, the Galaxy S10 feels like better value and a slightly more balanced phone.