The OnePlus 6T is the classiest looking and feeling phone OnePlus has ever made. Its back is a swathe of curved glass 3D glass, while the front is nearly all screen.

But the Samsung Galaxy S10 is something else. We thought the 6T’s 85.6% screen-to-body ratio was impressive, but the Galaxy S10’s 93.1% blows it out of the water. Part of that is down to Samsung’s well-established dual-curved display, which renders the side bezels down to almost nothing.

But the S10’s big advance is with the top and bottom bezel. They’re shrunk right down, to the point where there’s no room for the front-facing camera. Instead, it’s been built into a little circular island to the top right of the screen – a technique Samsung calls Infinity-O. 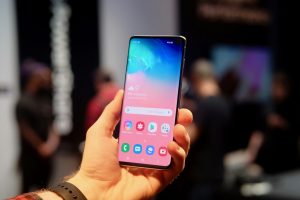 It’s certainly a more futuristic approach than OnePlus’s, which has crammed the selfie cam into a teardrop notch at the top centre of the display. This is certainly preferable if you’re a big fan of symmetry, though.

In terms of size, the OnePlus 6T is much closer to the Samsung Galaxy S10 Plus than its little brother. It’s significantly bigger than the regular S10 in every way, adding 7.5mm in the height department, 4.4mm in width, and 0.4mm in thickness. But the size spec that could really make the difference is the weight, with the OnePlus 6T carrying almost 30g extra.

We wouldn’t exactly call the galaxy S10 a small phone, but compared to the OnePlus 6T it certainly seems like one. Given this difference in size, it’s a major plus for the Galaxy S10 that it features a 3.5mm headphone jack when the OnePlus 6T doesn’t. It is especially mystifying when you consider that the 6T doesn’t manage to attain an IP rating for water and dust resistance, while the Galaxy S10 snags IP68 status.

Interestingly, both phones pack additional buttons that most other phones don’t. The OnePlus 6T is pretty much the only mainstream Android phone that packs an iPhone-like slider for quickly putting the phone on silent. The Galaxy S10, meanwhile, has a dedicated Bixby button which – hallelujah – can also be mapped to an app of your choosing this time around.

This early in 2019, the OnePlus 6T remains one of the fastest phones on the market. But it’s about to be supplanted by the class of early-2019, and the Galaxy S10 will be one of the first to overtake it.

While the OnePlus 6T’s Snapdragon 845 remains an effective chip, the Galaxy S10 offers next-level power. In the US and China that leap is easy to track with the provision of a Snapdragon 855 CPU. In most of the world, however, it will be powered by Samsung’s custom Exynos 9820 CPU.

Whichever model you consider, early benchmarks show that the S10 going to blitz past the Snapdragon 845 – and by extension the OnePlus 6T – in raw performance terms.

When it comes to RAM, both phones offer a generous 8GB, but the entry-level OnePlus 6T model drops that amount to 6GB. That’s still plenty, but the Galaxy S10 has the advantage here.

Both phones pack large, long AMOLED displays, though they’re far from identical. The OnePlus 6T’s screen is bigger at 6.41-inches compared to the 6.1-inch S10, though the Samsung phone is capable of outputting at a much sharper QHD+ resolution (the OnePlus 6T being ‘only’ Full HD+). The Samsung also sports an unusually long 19:9 aspect ratio, as opposed to the 6T’s 19.5:9.

One other interesting spec difference is with the phones’ respective biometric authentication systems. Both phones employ in-display fingerprint sensors, but while the OnePlus 6T is a first-generation optical approach, the Galaxy S10 employs an advanced ultrasonic sensor method. 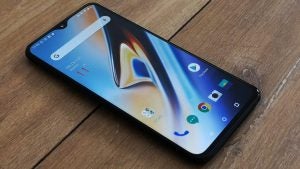 We’ll need to review the S10 thoroughly to be sure, but this approach promises to be both quicker and more secure – even if it does rule out the use of normal screen protectors.

Another spec advantage the Galaxy S10 has over the OnePlus 6T is wireless charging. OnePlus continues to be resistant to implementing this feature, presumably in a bid to keep that price tag down. But it’s looking to be more and more of a shortfall – especially when you consider that the Galaxy S10 can go so far as to charge other wireless devices.

Both phones feature fast charging support, though, and the OnePlus 6T actually has the slightly larger 3700mAh battery. The Galaxy S10 has a 3400mAh unit.

Again, we’ll have to hold off on our final judgement for this one, but we’re expecting the Galaxy S10 to dominate any camera comparison. Historically, Samsung phones have been among the best cameraphones on the market, while OnePlus has generally occupied a position nearer the middle of the pack.

The OnePlus 6T camera was a decent effort, with a dual-camera system that improved on the company’s HDR and low-light shooting performance. It’s a perfectly solid performer, no doubt.

But the Galaxy S10 offers plenty of hints that it’s going to be targetting the Pixel 3s and Huawei Mate 20 Pros of this world. Check out its triple camera system, which combines a regular 12-megapixel sensor with an adjustable aperture, a 16-megapixel ultra-wide sensor, and a 12-megapixel telephoto sensor.

One big edge that OnePlus phones have always had over Samsung phones is their use of a leaner, speedier, more ‘stockish’ variant of Android.

OnePlus’s OxygenOS is one of our favourite custom Android skins, precisely because it doesn’t mess too much with Google’s excellent mobile OS. Where it does tinker, it’s generally for the better, providing more potential for customisation. 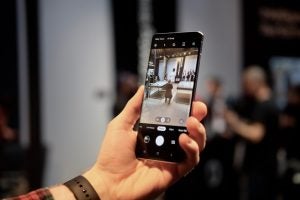 By contrast, Samsung’s custom UI has always been a lot harder to love. It has its defenders, but generally speaking Samsung software tends towards the bloated and ugly, and it’s rarely updated in a particularly timely manner.

It’s looking like an easy win for the OnePlus 6T in the software department, but there’s reason to hold off judgement. Samsung’s new One UI seems to be a big improvement over the TouchWiz era, with logical tweaks and a more coherent style.

The OnePlus 6T was one of our favourite phones of 2018, but the Samsung Galaxy S10 promises to outshine it in almost every way. It’ll be faster, slimmer, more stylish, and its camera is way more tricked out. Even Samsung’s custom UI isn’t the liability it used to be. But one thing remains in the OnePlus 6T’s favour: price. It remains to be seen if the S10 can justify the £300 difference between the two.