The Samsung Galaxy S10 has finally appeared, but should Samsung Galaxy S8 owners be rushing to get the new phone? Given the typical two-year upgrade cycle on most smartphones, this could be the most important comparison of the lot.

Both phones have long, dual-curved displays that dominate buttonless fronts. Both have metal rims and shiny, glass backs. Both place their cameras to the middle of those backs, rather than to the side like the iPhone family. Both are IP68 rated, making them virtually dust and waterproof. 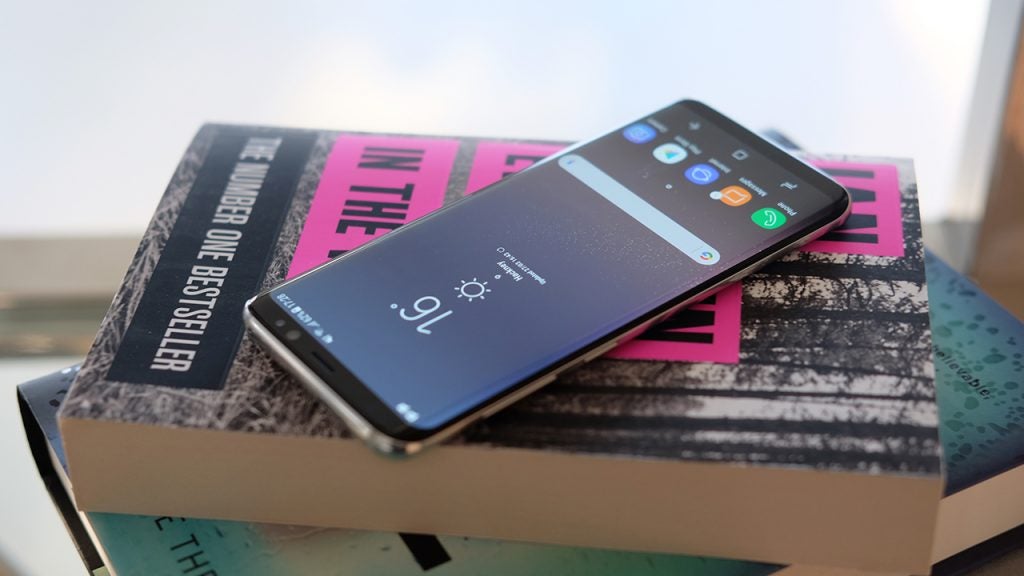 But look at the fine details of those elements and you’ll see how much the Samsung Galaxy S10 has evolved. Its display is even longer, with an aspect ratio of 19:9 rather than the Galaxy S8’s 18.5:9.

This means that the S10’s display fills the front of the phone way more, with minimal top and bottom bezels to the tune of a 93.1% screen-to-body ratio. The Galaxy S8 only manages 83.6%, thanks to its chunky forehead and chin.

In order to facilitate this expansion without resorting to a pop-up selfie cam, Samsung has incorporated the front camera into the S10’s display. It’s there as a little cut-out in the top right-hand corner, which is a technique that Samsung calls Infinity-O. A knock-on effect of this is that the Galaxy S10 has lost the sensor gubbins necessary for its iris-recognition feature. It won’t be missed. 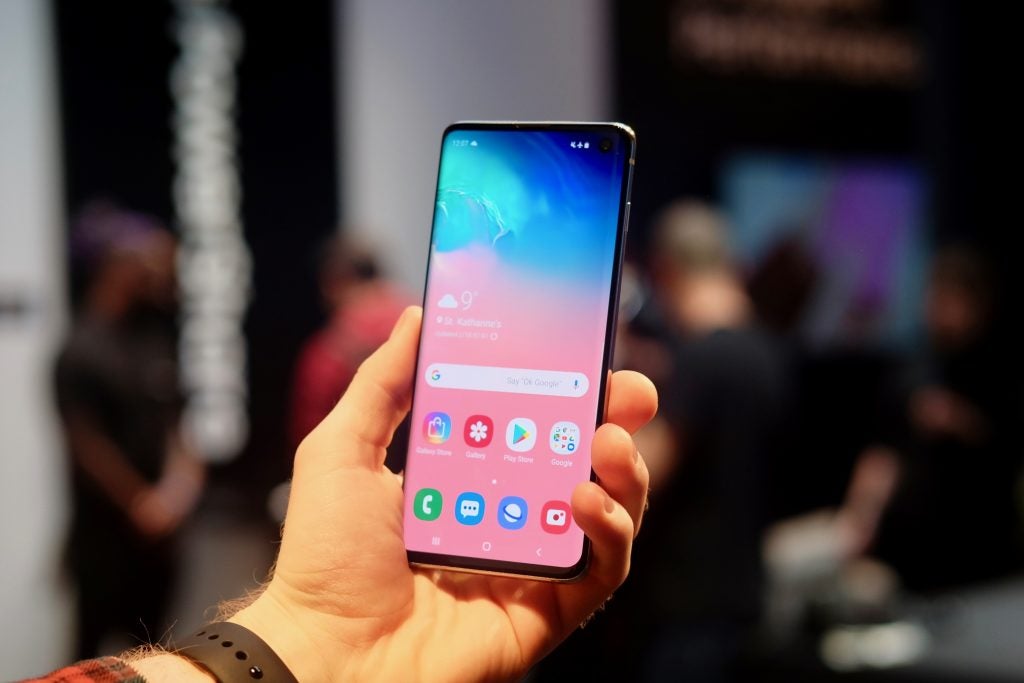 There are a couple of evolutionary differences on the rear of the phones, too. The Galaxy S8’s singular camera module has expanded threefold on the S10, and it stretches across most of the width of the phone as a result.

Below that long camera module you might notice an absence. Unlike the Galaxy S8, there’s no fingerprint sensor on the Galaxy S10. That’s because Samsung has stashed an extra-secure ultrasonic sensor right under the display. This represents a potential step-up from the first generation of optical in-display sensors seen in the likes of the OnePlus 6T, so we’ll be interested to see whether the performance has improved.

Despite its more favourable screen-to-body ratio, the Galaxy S10 is actually slightly bigger than the Galaxy S8. We’re talking one or two millimetres added to the height and width. The new phone’s also two grams heavier. At the same time it’s fractionally skinnier than the older model.

You don’t have to look far to see the reason for this general expansion. The Galaxy S10’s display isn’t just longer than the S8’s, it’s flat out bigger. We’re talking 6.1-inches for the S10 against 5.8-inches for the S8. In that context, it’s actually quite impressive that the overall size difference is so marginal.

Besides being larger, the Galaxy S10’s screen is on paper a decent step-up in quality. It boasts support for the HDR10+ standard, and it gets super-bright to the tune of 1200 nits. The Galaxy S8 just about crawls above 1000, which is still far from bad.

Other than that, the two displays share their Super AMOLED status and QHD+ resolution. Samsung knows what it’s doing in the display department.

When it comes to power, the Galaxy S10 looks to have an even bigger lead over the ageing Samsung Galaxy S8. The new device makes the switch to a Snapdragon 855 (for the US and China) or an equivalent custom Exynos chipset (for everywhere else), which have been built using a smaller and more efficient 7nm or 8nm process respectively.

By contrast, the Samsung Galaxy S8 runs on a Snapdragon 835 or an Exynos 8895 chip, both of which are built using an 10nm process. We’ll need to do some benchmarking to be sure, but it’s safe to expect a sizeable performance advantage for the newer phone.

The inclusion of a new vapour chamber cooling system also means the S10 should be able to maintain peak performance for longer. As a final performance perk, the Galaxy S10 runs on 8GB of RAM, which is double the 4GB employed by the Galaxy S8.

While we’re talking memory capacities, the S10 far outstrips the S8 with at least 128GB of internal storage. You can also go with a whopping 512GB option if you so wish. Galaxy S8 users could only count on 64GB as standard, though both phones can accept up to 512GB of expanded storage through their microSD slots.

Finally, the Samsung Galaxy S10 sports a much bigger battery than the Galaxy S8. Its 3400mAh unit further explains why the Galaxy S10 is a little heavier than the S8, which has a 3000mAh battery.

While both phones support fast wireless charging, the S10 has the added benefit of being able to charge other wireless charging products. This is clearly intended to power Samsung’s new Galaxy Buds, but it should work with any Qi-compatible device.

The Samsung Galaxy S8 camera features a single 12-megapixel sensor behind a wide f/1.7 lens and Dual Pixel technology. It wasn’t a massive leap from the Galaxy S7 before it, in truth.

Skip forward a couple of generations, and the Samsung Galaxy S10 camera looks radically different – not least because there are three of the things. You still have a 12-megapixel primary sensor with dual pixel autofocus and OIS, but this one has an adjustable aperture that can switch between f/1.5 and f/2.4 depending on the conditions.

In addition to that you get a 12-megapixel telephoto sensor with an f/2.4 aperture and OIS for a proper 2x optical zoom, as well as a 16-megapixel f/2.2 aperture super-wide-angle fixed-focus sensor. Excuse us while we take a breath.

The end result of all these optics should be a much more flexible and powerful photographic package. The Galaxy S10 promises to shine in virtually all conditions, whereas the single rear sensor setup of the Galaxy S8 feels a little limited here in 2019 (at least without some Google Pixel 3 software magic in tow).

Flipping over to the front, the Galaxy S10 gets a dual-pixel 10-megapixel f/1.9 selfie camera. The Galaxy S8 has an 8-megapixel f/1.7 example. We assume the newer example will be superior, especially with that dual pixel autofocus, but we’ll have to wait and see.

The Samsung Galaxy S8 was unveiled on March 29, 2017, with the base model initially starting at £689 in the UK. If you head over to the Samsung website right now, you’ll find that you can still pick up the Galaxy S8 brand new for £449. That price drops well below the £400 mark if you shop around online.

Whichever price you take as a baseline, it’s a fair bit cheaper than the Samsung Galaxy S10, which will set you back £799 for the 128GB model and £999 for the 512GB model. The new phone is available to pre-order now, and is set to arrive in stores and homes on March 8.

The Samsung Galaxy S8 was one of the finest smartphones on the market in its day, and it remains a capable performer. You can clearly see its influence in the design of the Galaxy S10. But there’s no escaping progress, and the Galaxy S10 is clearly the better phone in virtually every way. It’s shaping up to be a risk-free upgrade decision for Galaxy S8 owners.